Something cool happened at the Winter Short Track Race yesterday… 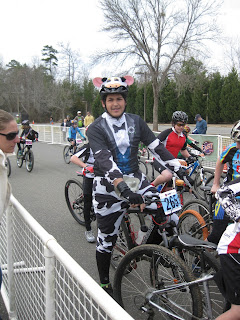 Yup, that’s Lunchbox.  And yes, he was all dressed up like a fancy cow.

Tired of going up against tiny racer children didn’t frustrate him.  In fact, it inspired him.  Instead of wasting hours and hours of his free time “training”, he decided to have a little fun.  That kid has his own personality for sure, and he doesn’t really care what people think.  He marches to the beat of his own drum, so to speak.

Anyway, as I stood there chatting with former Washington Redskins and current Hall of Fame coach Joe Gibbs (his grandson was racing) I watched my big goofy kid take off into the woods.  He was having a lot more fun, and I really enjoyed heckling the six foot three inch cow riding by on a bicycle. 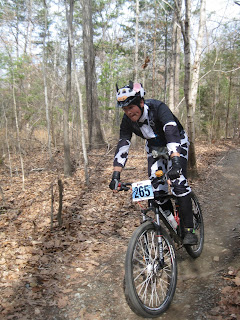 Just like his dad, he’s pretty quick in the woods.  You know, as quick as a cow can be. 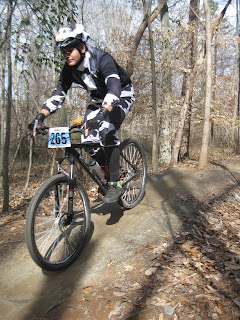 And also like his dad, climbs are tougher.  But when you’re dressed like a cow, things are so much more fun. 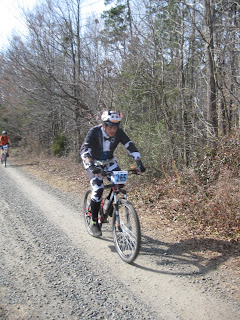 I’m really proud of Lunchbox for getting out there and riding his bovine tail off.  He’s a great kids, and he just wants to have a little fun.  He got a lot of laughs and cheers, and it was so nice watching someone “race” without being so damn serious about it.

People could learn a lesson from him.