I did learn something during the last Winter Short Track Race…

Riding a bike in its simplest form is pretty damn rad. 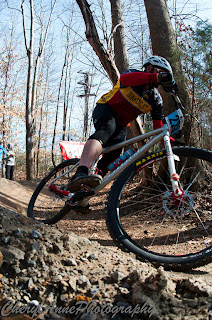 The second race of the day for me would be the debut of my fully rigid single speed bike, and it was fun as hell.  I was a little worried at first, but as it turns out I didn’t need to be.  I setup my Maxxis Ardent with a guestimated “ideal” tire pressure, and took off in the woods with the rest of the one-geared folks.  The first lap was a little interesting, since I had to get used to a little bouncing around in the corners due to a lack of front suspension.

It didn’t take long to forget about that squishy front end I used to have. 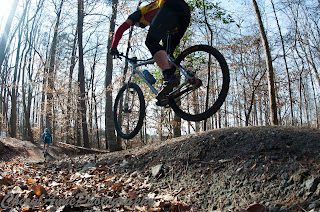 I felt faster and in much more control, and as you can see above I had no problems catching air either.  The smaller jump after the one pictured above was full of hecklers as usual, so I made sure to jump that one too.

I was having a shitload of fun. 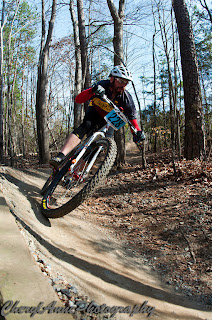 My legs were tired from racing earlier, but I was having so much fun riding a rigid bike that I forgot about that for a while.  Plus, Good Guy Greg decided to join in on the fun and “race” with me, also on a rigid single speed.

Hopefully he doesn’t hate me for talking him into it.

I did okay out there, and I have to say that I enjoyed my second race much more than the first.  Towards the end though, I did have a small issue with my right hand falling asleep.  I’ll chalk that up to the death grip I had on the handlebars.  I know, I know, I shouldn’t do that, but I was still getting used to the small amount of bouncing around.

That will get better with time I suppose.

For now, I think I may have found a new way to torture myself.

I mean, a new way to have fun.