Growlers?  Only a couple of people reading this will get that.

Anyway, I guess I’ll just focus on the first part of the title:  Group Rides.  As in, a group of people riding.  Or, a ride with a group of people.  Or, people gathering in a group to ride.

We gathered, and we hung out in the “little” mountains. 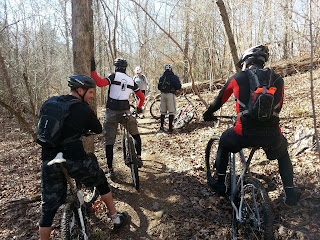 I’d like to tell you it was fun, so I will.  We had a great crowd consisting of Brandon, Irish Luke, TomTom, Good Guy Greg, and Eastwood.  The crowd was supposed to be bigger than that, but with the temperature being 32 degrees at the ride start I think staying in a warm bed sounded a lot better to the others.  Hell, it sounded good to me too.

We started out with a little warm up on the Woodrun trail, and the cold air hurt like hell.  The warm up was nice, and I thought that I would be good to go for the rest of the ride.  When we started the climb up Keyauwee (pronounced KEY-YOW-WE), my legs felt like complete and udder shit.  It was if that was the first time I had ever tried to climb on a bicycle.  I let the group go ahead while I figured out how I was gonna survive the ride, and eventually I got back into the swing of things.  Maybe I’ve been “training” too much lately or something, but damn, I never did feel right.

The downhills were fun as always, and the trail was in awesome (i.e. hauling ass) shape.  As we were going up another climb though, my legs started protesting again.  Luckily, the group stopped when Good Guy Greg started having issues with his shifty bits. 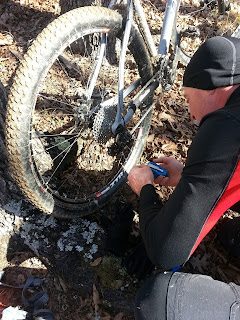 We got going again, and I started feeling a little better.  Just as I was starting to keep pace with the group, I heard a hissing sound coming from my front tire.  The ancient pointy rocks at Uwharrie and I have met before, so I knew what it was.  I stopped for a moment and let my tire sealant do its job.  I was on my way in a matter of minutes.

The group was long gone, but my legs started to feel like I could use them again.  We climbed some more, rode down a few descents, and eventually I say everyone.  We stopped for a minute to regroup, then we climbed a little bit more to the end of the loop.  We made our plans for the the Supertree loop (pronounced SUPER-TREE), and climbed some more. 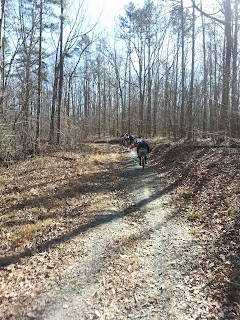 I fell way behind trying to take that photo (and get my phone back to the safety of my pocket), but it didn’t take long to catch back up.  We took a slight detour on an unmarked yet still fun trail, and it seemed like everyone was having a blast.  Well, until my left leg cramped a little bit.  I really had no idea why I was having so many issues, but at least they were minor inconveniences.  I got moving again, and just like that we were back on a fireroad heading to the parking lot, which turned into an all out sprint for some reason.

Wait, I know why. 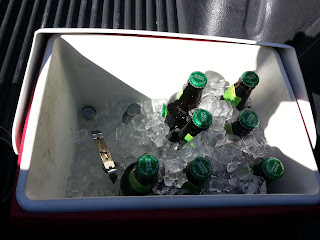 Good Guy Greg was thoughtful enough to provide the group with hoppy beverages, and we hung around a bit to enjoy them.  We shot the shit for quite some time, even well after we had loaded the bikes back up. 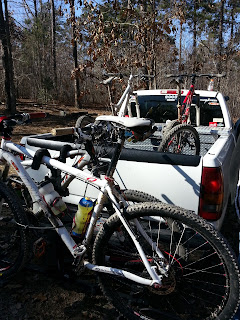 We headed out of the woods into town to a local eating establishment (recommended by a coworker of mine), where we faced more issues in an hour than I did my entire ride.  You know, shitty service, slow service, and lack of service.  The food was okay at least.

While I haven’t always been one to do group rides since I’ve always been kind of a loner, I realized Saturday that I should be doing more rides like that.  Good company, good conversation, and motivation to keep going even when things get rough.

I’ll make sure to do this a little more often.

Oops, I let the "growler" out of the bag. But yes, it was a lot of fun and should be repeated with some sort of frequency.

You did a better job describing it than I did