I’ve Figured It Out 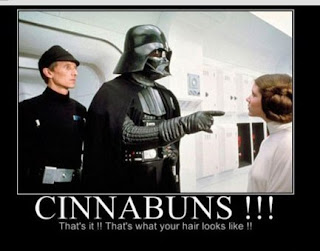 Next up is another race weekend.  While that may sound all fancy, it’s actually not a big deal.  I’ve relegated the Winter Series to just a setp in the right direction for my “training.”  Two races at a time for the five day series seems to be a good platform to jump off of for the rest of the season.  If I can build on it, I just might get somewhere this year.

As you know, in addition to my “normal” race in the Clydesdale category, I’ll be running with the one-geared animals in the fully stacked single speed class.  It hurts like hell, and sometimes I wonder how I even manage to finish.  I’ve upped the ante a little bit by throwing a rigid fork in the SS bike, and I’m really looking forward to it.  I’ll probably bust my ass several times while I learn to handle a bike without suspension, and actually I’m looking forward to that too.

This shit is supposed to hurt, right?

Trail building is also on the menu for the weekend.  We’re hoping to get back out on The Trail to flag a new section, and hopefully we won’t have to undo any shoddy work.  I’ll be sure to report back here if we have any “encounters.”

In other news, in an effort to take things a little more seriously, I’ve taken a look at my current road bike setup.  The size of my bike is spot on, but I’ve had some issues with the cockpit.  Too stretched out, not enough width on the bars, and a host of other fit-related issues.  It’s time I take care of this so I that I might actually enjoy riding on the road. 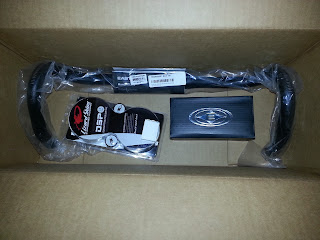 Lastly, I forgot to mention that I’ve rustled up some nutritional support again this season.  Honey Stinger has thrown their love my way just like last year (even though I talked a little shit about the guy on the packages a couple of times.)  Honey Stinger worked pretty well for me last season, and I’m glad they’re down with me once again.

I have enough to last me for a little while. 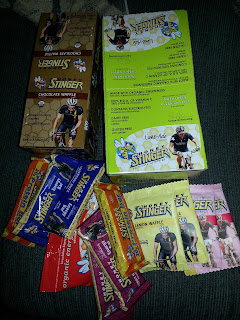 Yeah, that will be gone by Monday.

Don’t worry though, I’ll be back.

Now it’s time for me to make like horse shit and hit the trail.