And I’m glad I took yesterday off from here.  My day at work Friday was hell, and I thought I was never gonna get out of there.  I don’t often have to stay late, but for some reason I got shit on and had to work way past my regularly scheduled time.  When I finally got home, I only had a couple of hours to eat, drink a beer (or two or three), and prepare for my journey the next day to the Southeast Bike Expo.

I knew I was tired from a long day, so I pushed back our start time from 6:00 a.m. to around 6:30.  I picked up TomTom at his house around the corner, and we made the long journey to in the rain.  It wasn’t looking good for the trail conditions down there, since it shit on us the whole time until we rolled into the parking lot.  But, we finally made it. 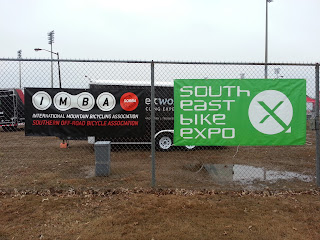 They moved the event down the road a bit this year, so instead of being out in a empty field we were inside some sort of compound.  That kept people from sneaking in (like last year) and with the rain it was good to be on asphalt instead of in a muddy field. 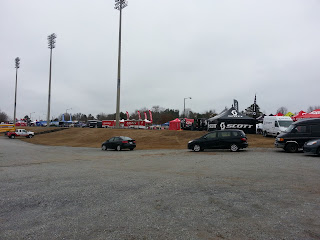 TomTom and I started making our rounds, checking out the vendors and doing my best to talk to everyone I knew.  Of course our first stop was to visit Mike with Niner Bikes. 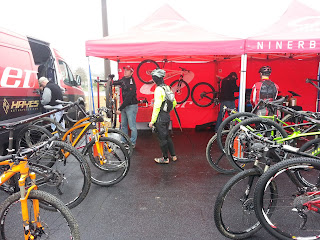 Mike is good people, and onoe of the reasons that I dig Niner so much.  I dropped off some smuggled out of state beer for him, and we discussed bike stuff for a bit.  Of course, he asked why I didn’t bring Dicky along.

“He’s afraid I would let him drink too much.”

That was the recurring theme for the day…

Bastard.  Shoulda went down there with me.

Anyway, we decided to take a lap around the Expo.  The rain had stopped, but seeing everyone come back from their rides all sloppy made us decided to wait a little while to ride.  There was a lot more to see and do this year, so we got busy. 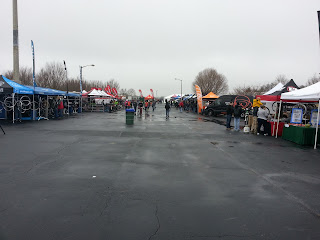 The next stop was to visit the folks over at Industry Nine, where I found them testing a new wheel. 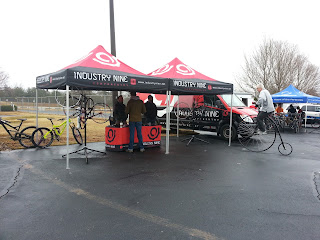 I’m not sure why you would want one of their fancy wheels on a high roller, but hey, everyone should enjoy a quality ride on I9 wheels.  We say their new hubs and the Torch wheelset, and I even got a look at the new single speed hub.  I didn’t take a photo, but trust me when I say that it is badass.  I think it’s time for me to start thinking about an upgrade.

Anyway, we walked over to the folks at Cane Creek Cycling Components, and we looked at headsets an shocks.  Malcom was kind enough to explain to TomTom (who rides squishy bikes) all about how the Double Barrell rear shock works. 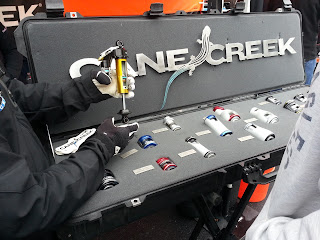 Right next door was the Maxxis booth… 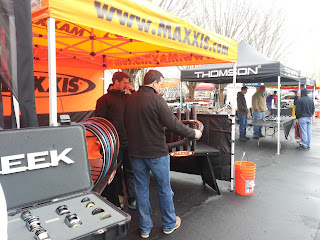 Where I promptly went over and introduced myself as a “sponsored rider.”  I felt kinda douchey saying that, but when I told him my name at least he knew who I was.  He didn’t even ask why I didn’t bring Dicky.  Instead, we talked about prototype tires and new designs, which really got my attention.  There will be some cool new stuff coming out of Maxxis, and I’ll get to it as soon as I can.

We walked over to the Scott tent, and I expected to be greeted with disdain and snobbery (like last year.)  Instead, TomTom (who rides one of their bikes) got a pretty good reception and seemed to emjoy looking at their new stuff. 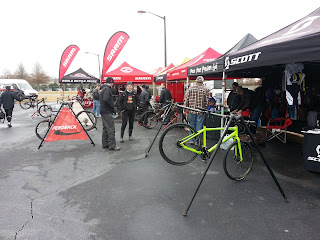 New product stuff at the Expo?  You betcha.  SRAM had their new XX1 drivetrain on display. 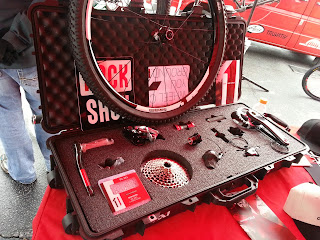 Although it’s really freaking pricey, I must admit that it rides pretty smooth.  I don’t think I would shell out the big bucks for it right now, but when it trickles down to the X9 level I may give it a whirl on my geared bike.

Speaking of things that are really nice (yet expensive), we stumbled upon a couple of guys from Webb Works, makers of custom bamboo bicycles. 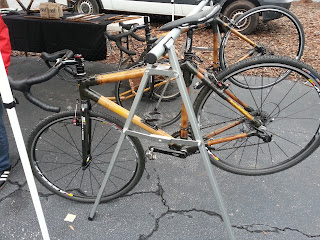 These bikes are handcrafted in out of bamboo (duh) and joined with carbon to make one really light bicycle.  The pictured above was a road bike, but they also had a cyclocross, touring, and even a fixie. 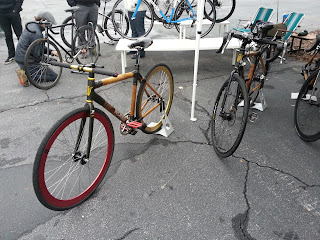 They were prtty neat to look at, touch, etc.  Word around the campfire is that they will be introducing a 29er very soon too.  I’d like to demo one to see if it can withstand my power.

You may ask, “Did you actually ride anything out there?”

Well, yeah, we did.  I just don’t want to get into to it today.  So yes, I will drag out a post over two days as usual.

Be back here tomorrow.