Last week I had a grand idea.  I knew that most of the local trails would be closed, and with some travel coming up the next few weeks I didn’t feel like driving out of town.  Instead of riding inside like I’ve been the last several Saturdays, I decided that a long-ish outdoor road ride was in order.

The plan:  Ride from my house on the north east side of town to the Whitewater Center (on the total opposite side of town.)

It sounded really far at first, but when I started looking at a map I realized that it would only be a little over twenty miles one way.  I looked at The Google, loosely planned a route, and scribbled some stuff down on a makeshift cue sheet.  I was ready.

The next morning I took off.  It was a little cold, but the forecast called for a high near seventy degrees.  A light DeFeet base layer, arm warmers, and knee warmers were sufficient, even though I was a little chilly.  My route took me out of my neighborhood and straight to TomTom’s house, where I would hit the local greenway for a small section. 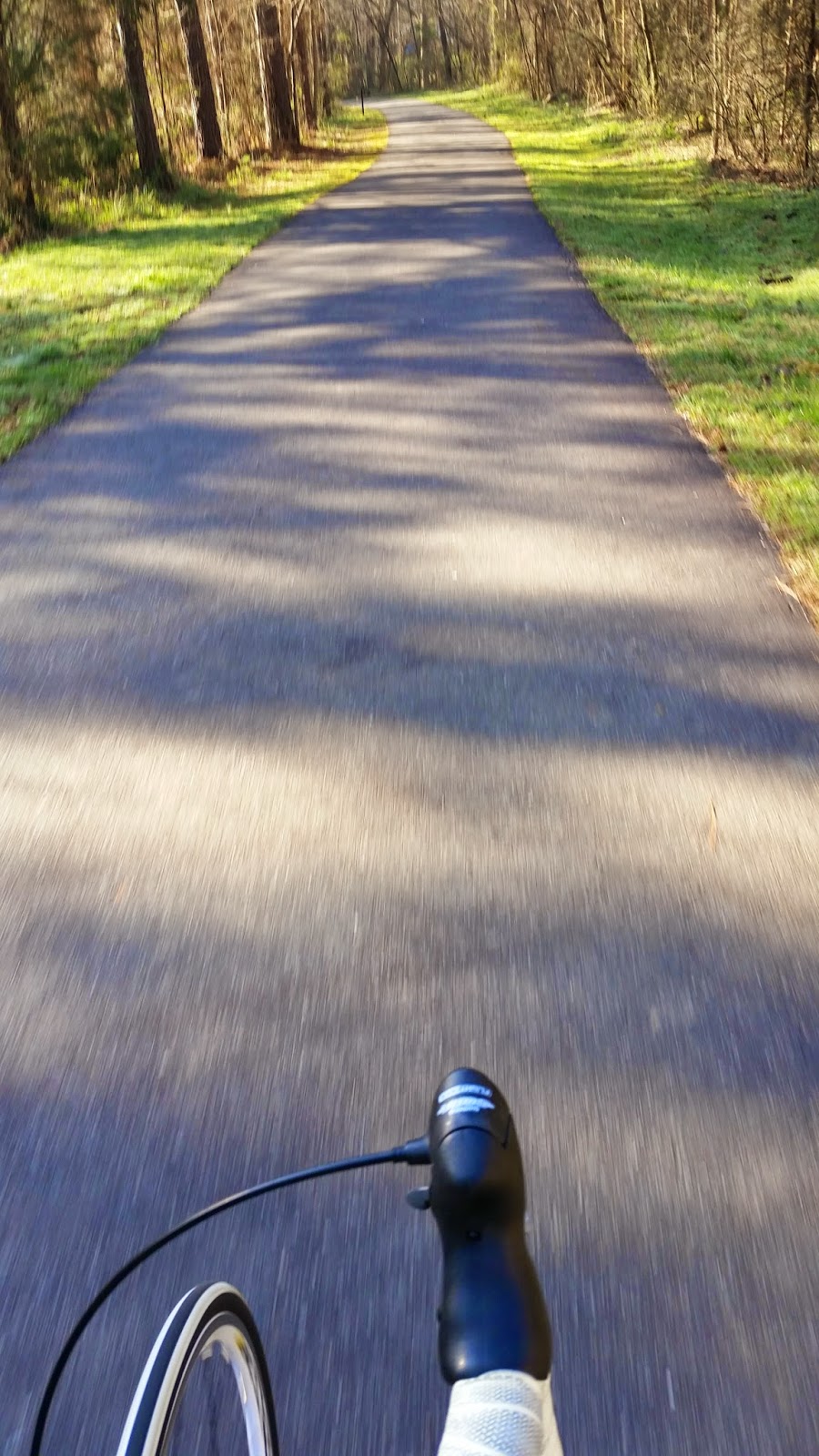 After that I had to wind around through several neighborhoods.  This is where the cue sheet came in handy.  Some turns were made after a few hundred feet; others after a half mile or so.  It was a little confusing but nice because it kept me off of some busy roads.  Eventually though, I had to mix it up with traffic.  I was a little worried but there were plenty of bike lanes.  Too bad they were full of gravel and other assorted debris. 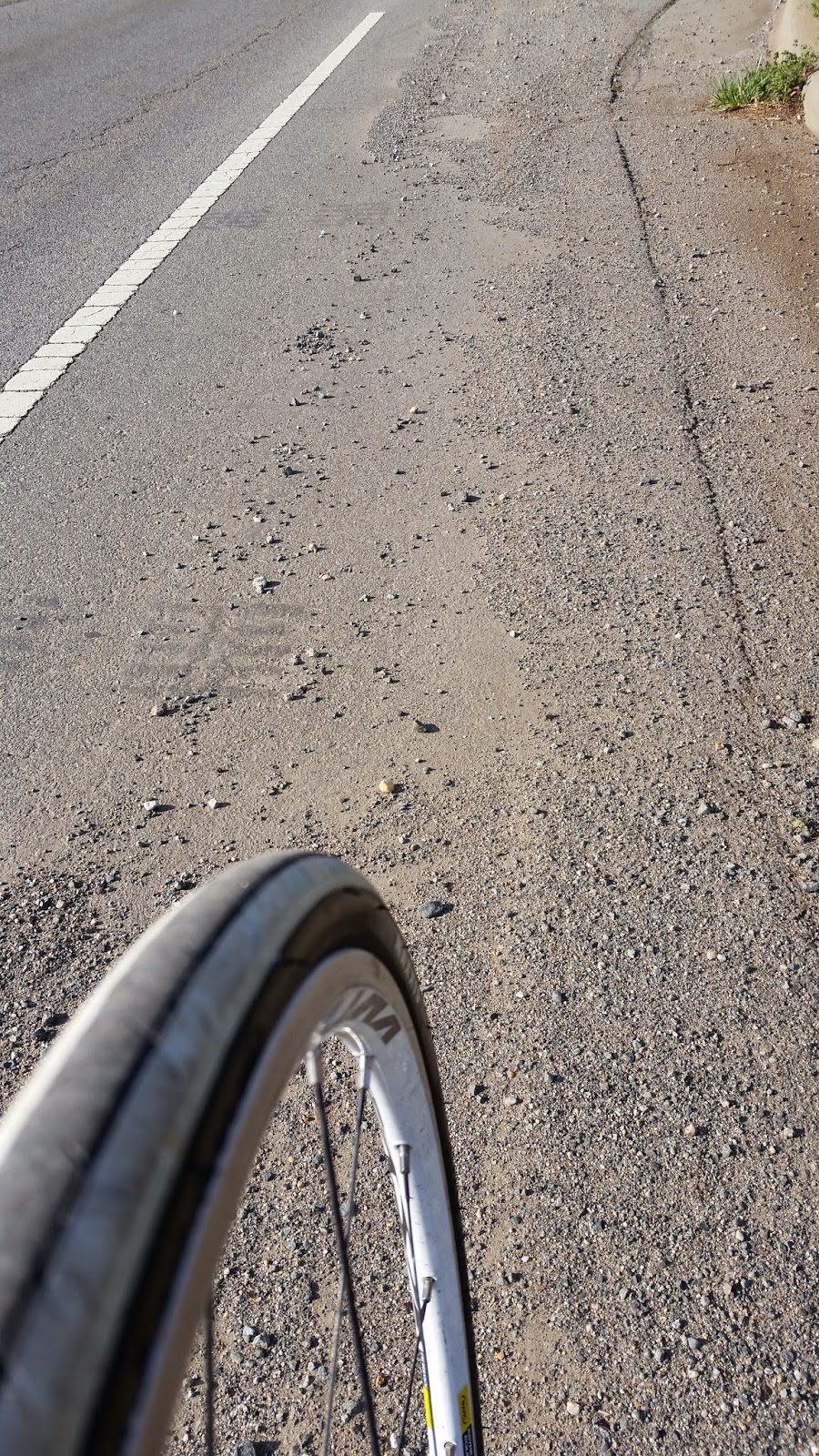 That section was the longest on one particular road, and the worst part was that the bike lane ended (pushing me right into busy traffic.)  About a mile without a bike line lasted what seemed like forever, but eventually I ended up on some lightly traveled country roads.  It was like that until I reached Paw Creek. 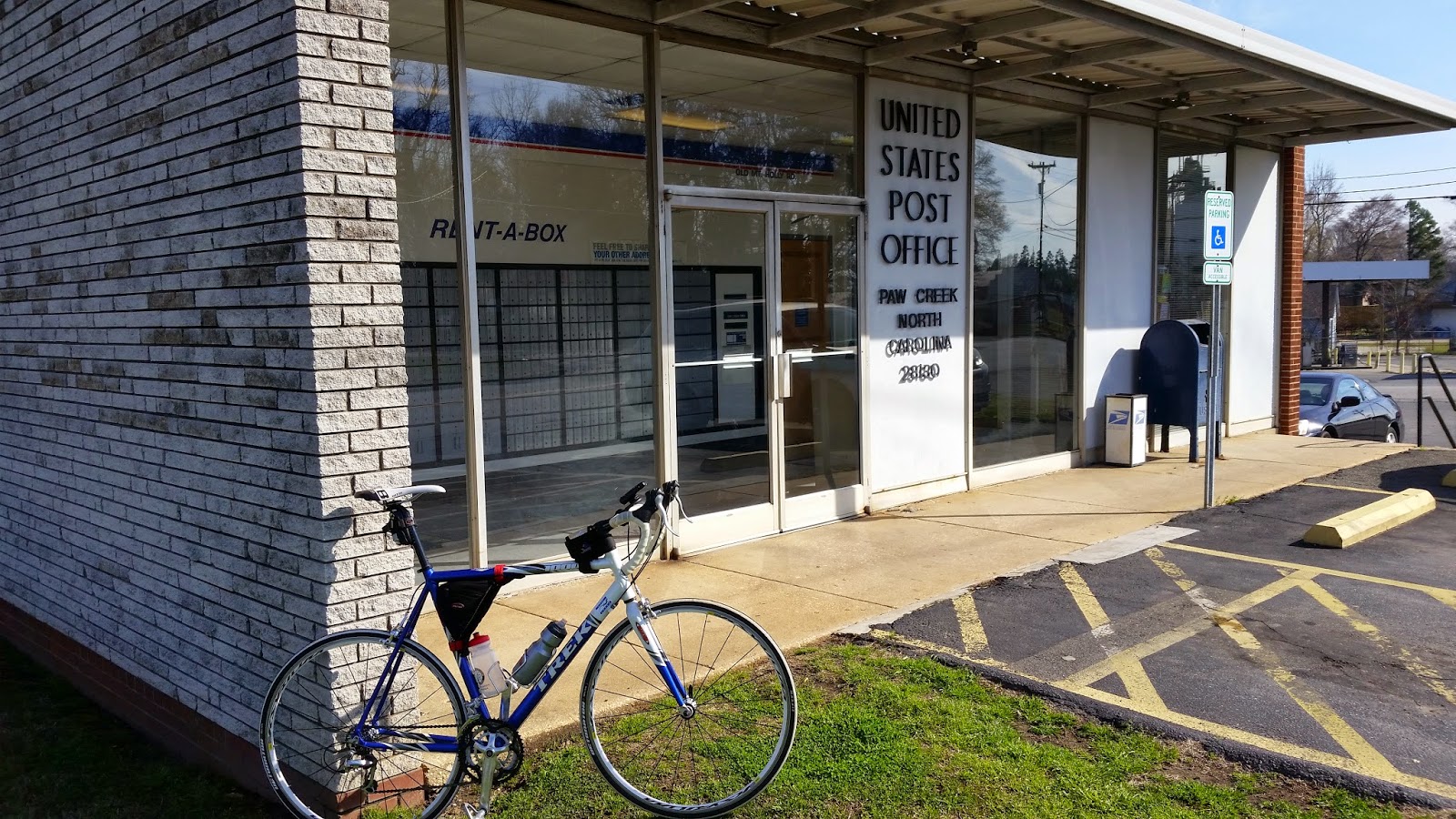 Paw Creek is also known as the Tank Farm, where all the area’s gasoline is stored while it waits for tanker trucks to pickup and deliver to gas stations. 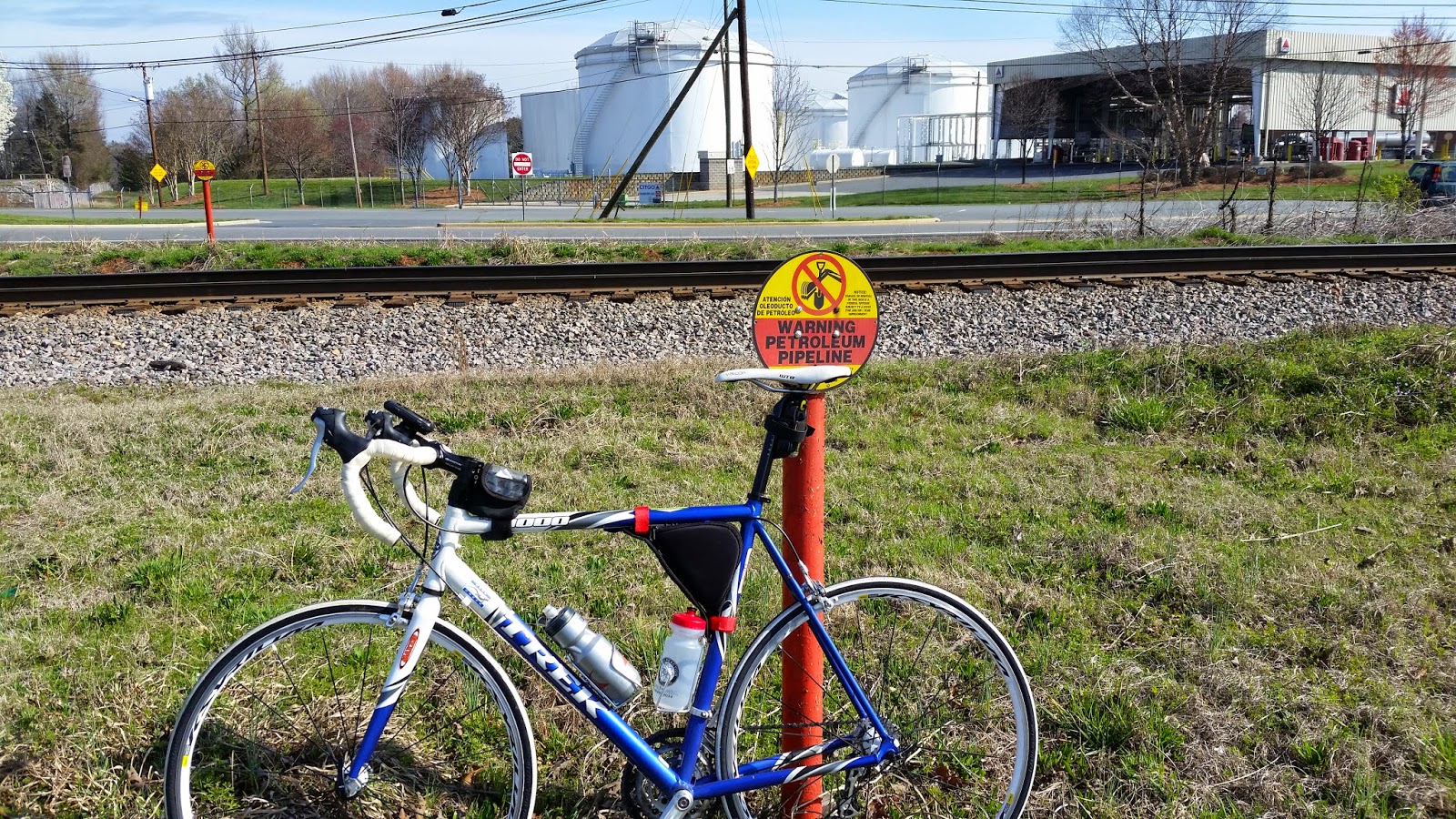 Since it was a Saturday the traffic is that industrialized area was pretty light.  It remained that way until I got close to my destination too… 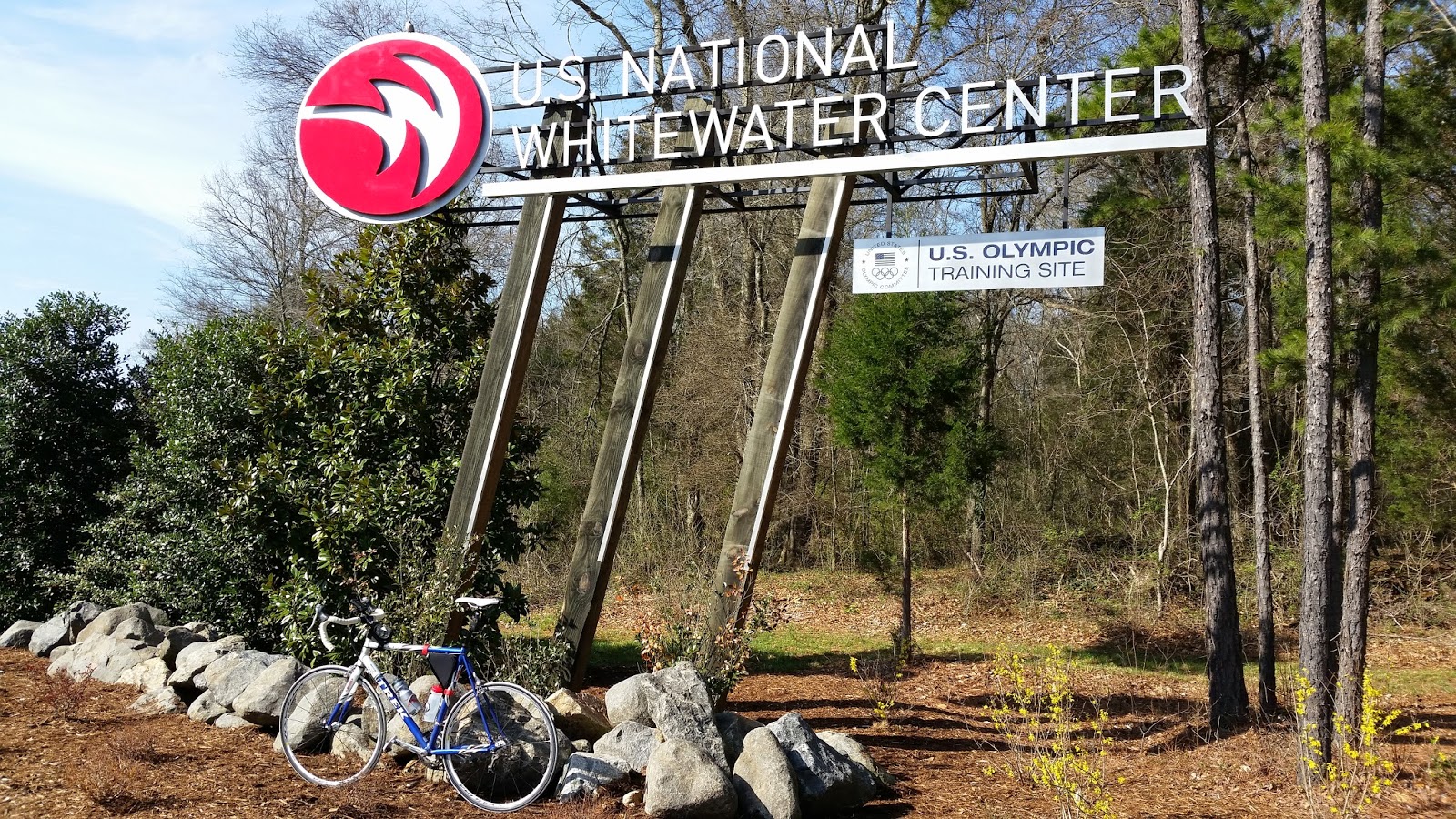 I still had a mile and a half or so until I reached the actual whitewater park, and that road was also lightly traveled since the trails were closed.  I’m glad they were, since I obviously brought the wrong bike for trail riding. 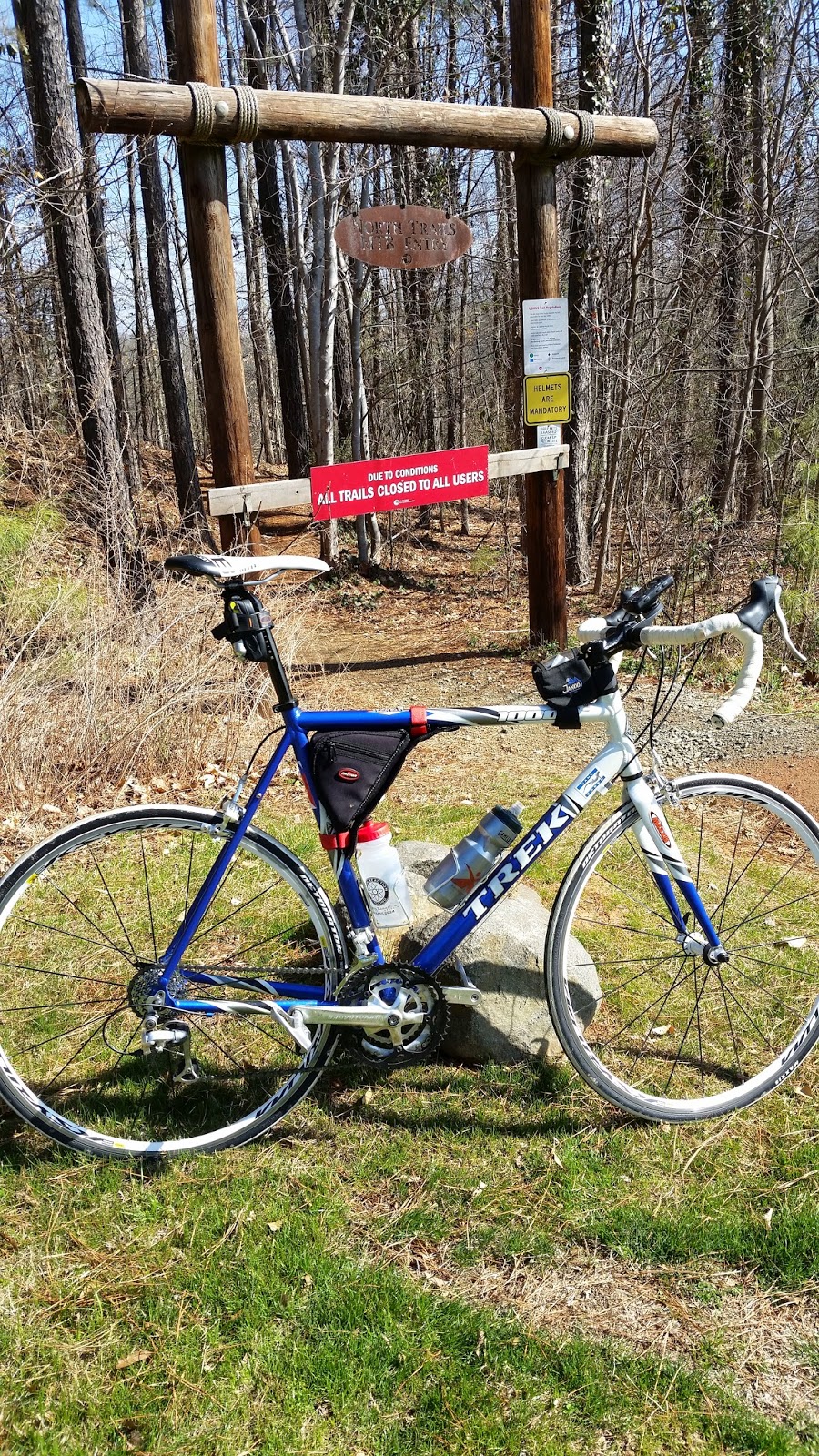 After a small potty break and a lap around the man-made river, I started to head back towards home base.  The highlight of my day was when a car pulled out ahead of me with balloons hanging out of it.  They were driving really slow as no not lose any, which meant that I would eventually start to gain on them.  Once I got close, they pulled over.  The passenger hopped out and proceeded to stuff the balloons into the back seat. 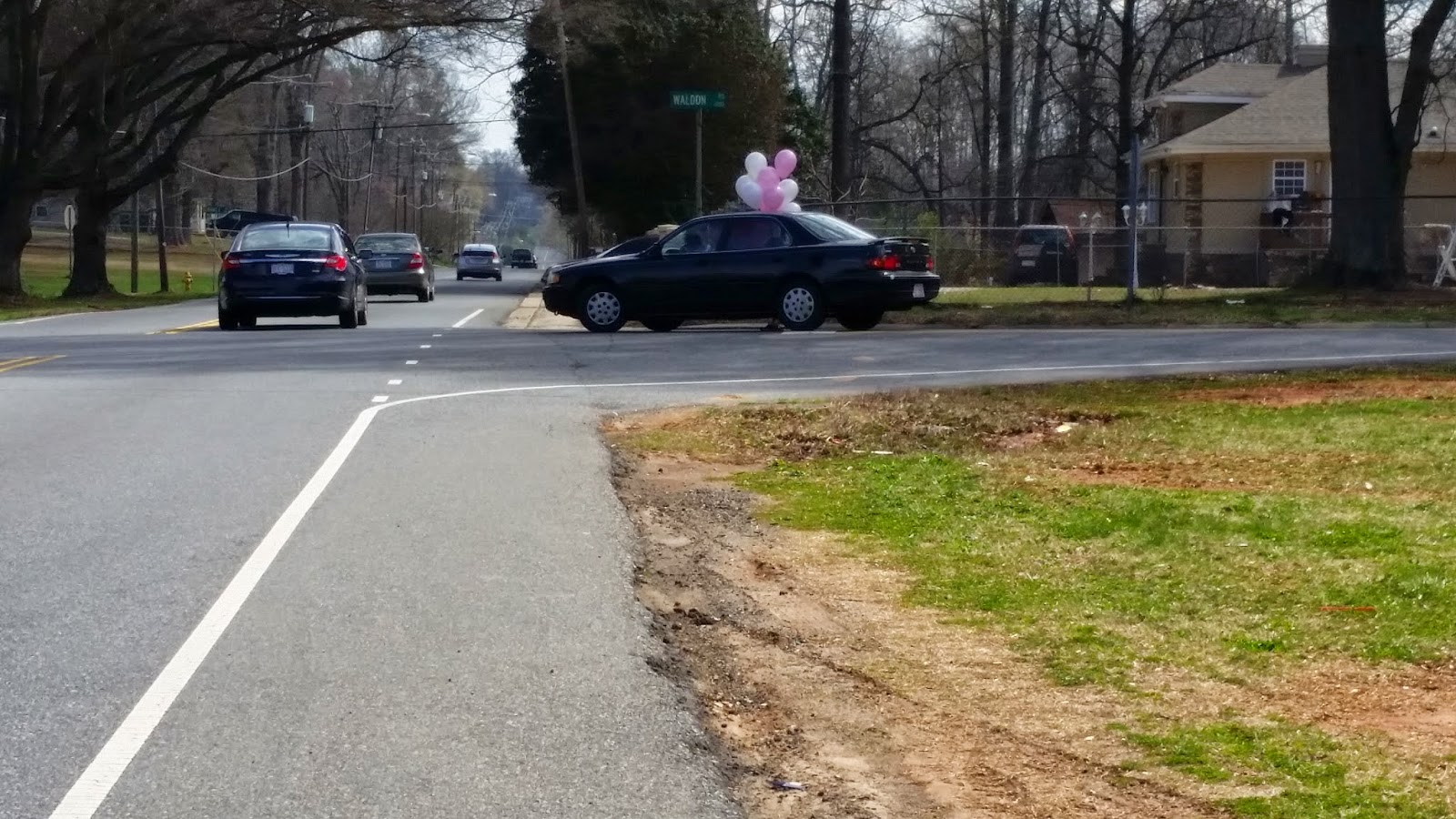 It was funny as hell, especially when they drove off again in a car filled to the brim with party favors.

I pretty much took the same route back.  I took a few photos of stuff I missed the first time though. 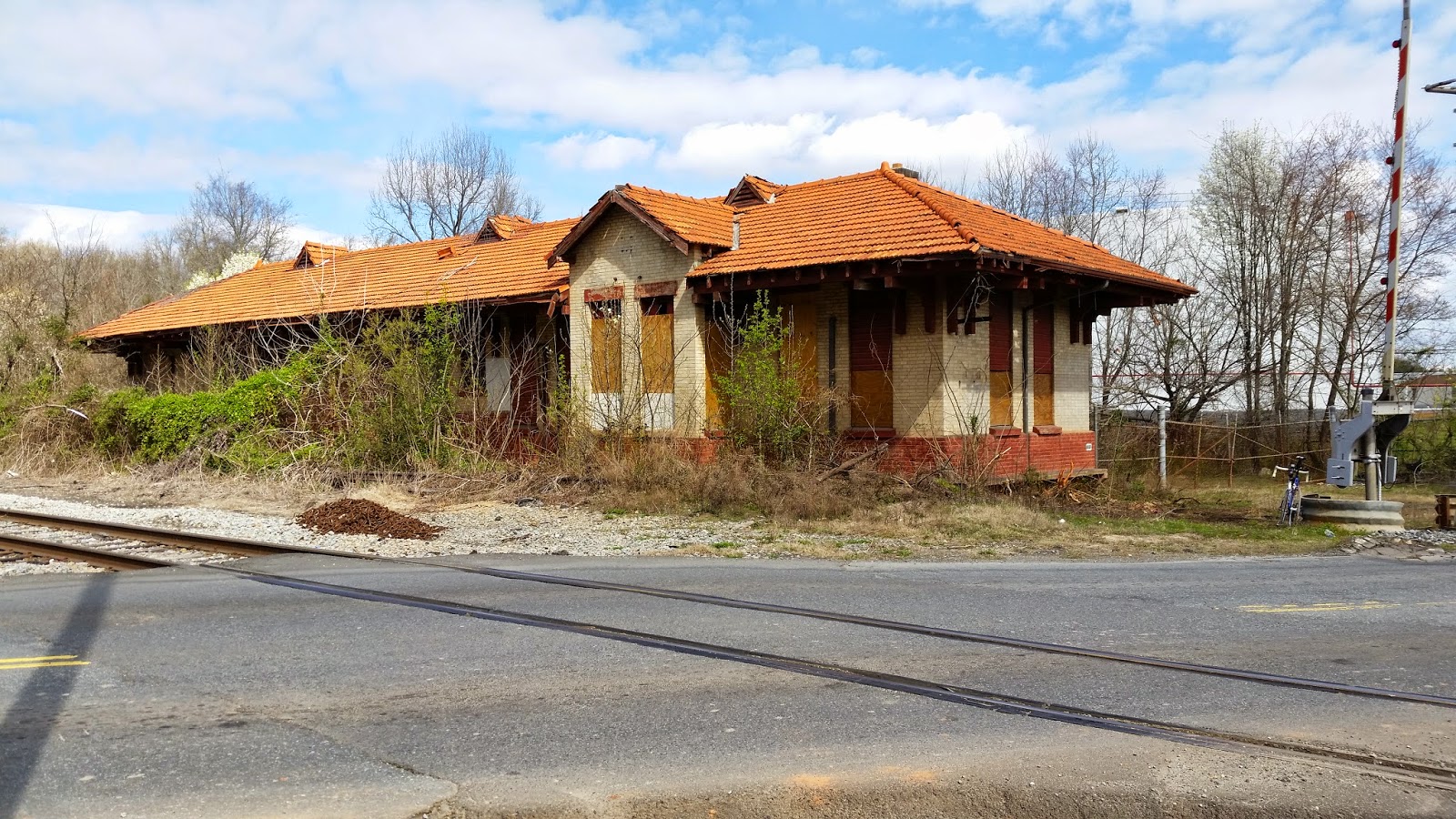 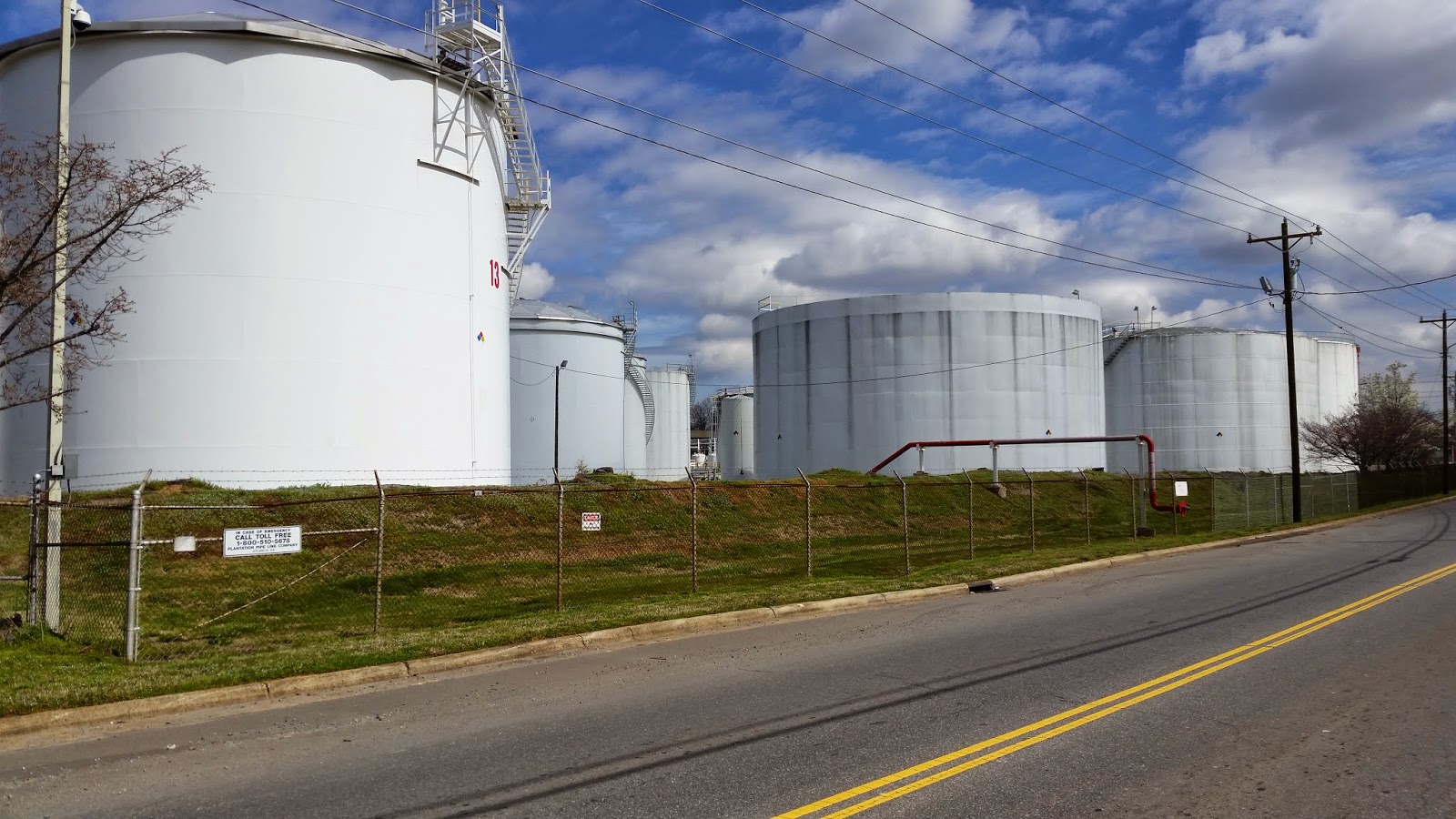 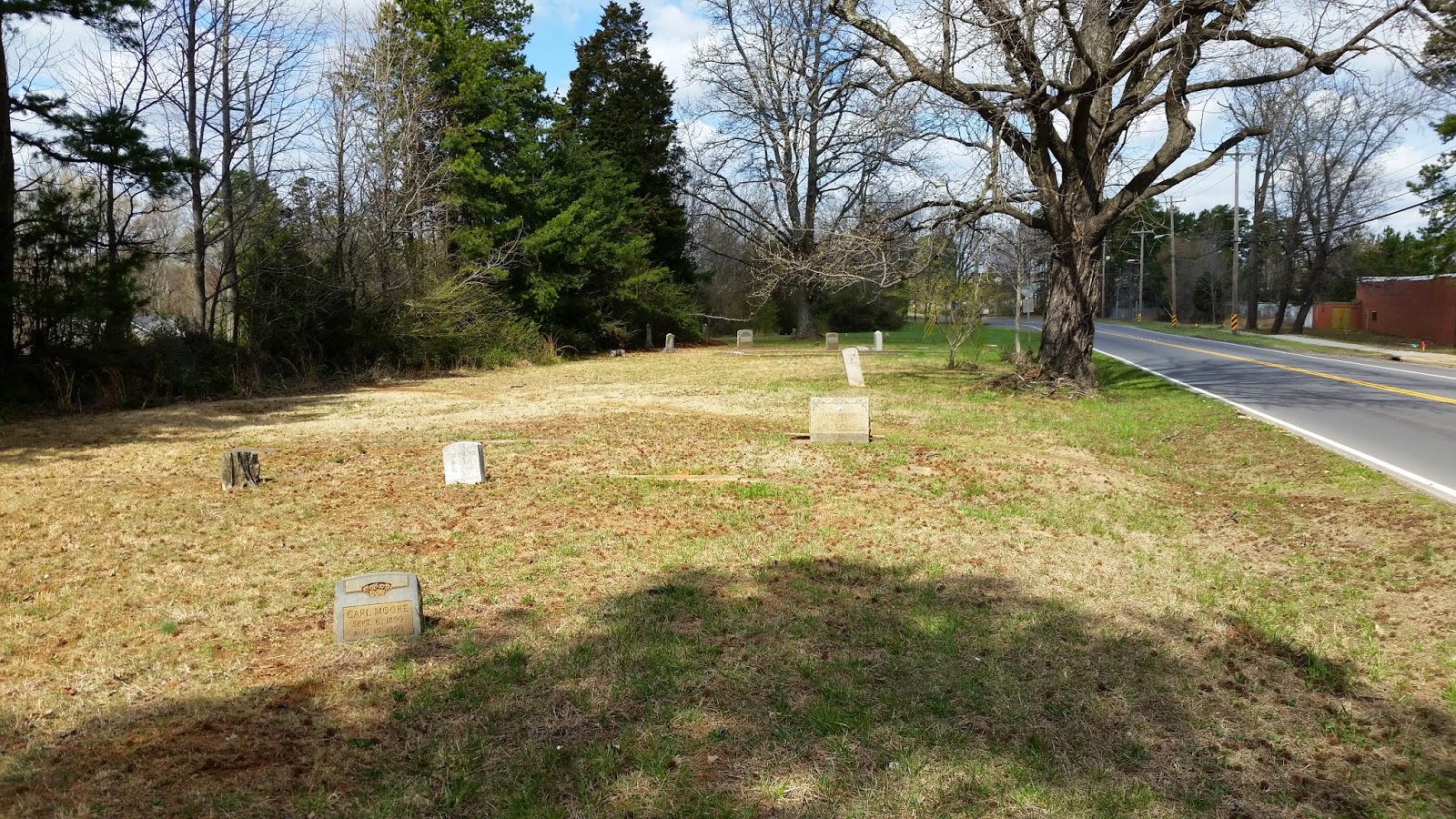 The busiest road I had to cross on the way back had a bike lane leading into it.  The turn arrow (in the bike lane) suggested to me that I would be spit out onto that busy road which I knew for sure didn’t have a bike lane. 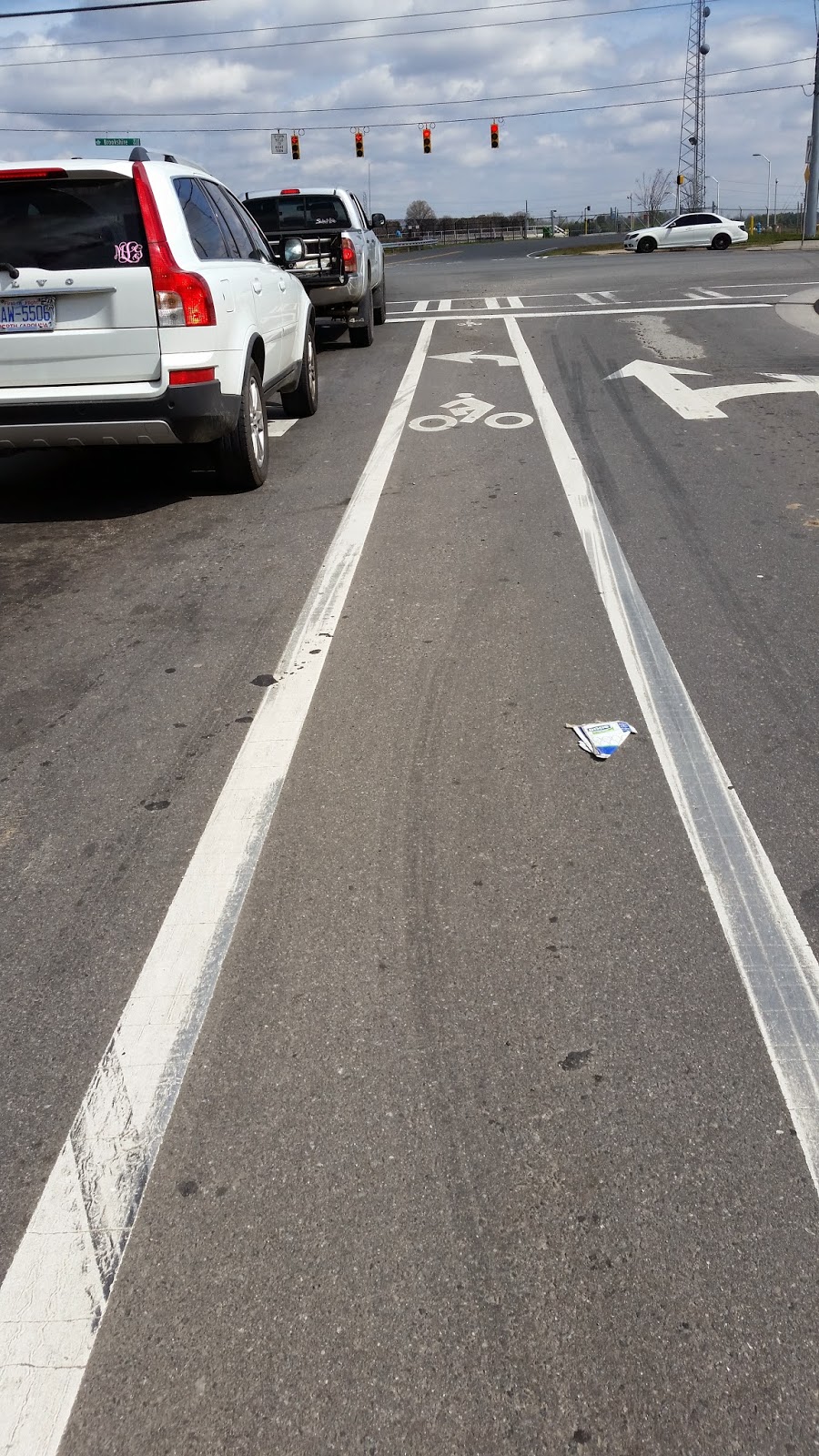 I was wrong though, because as soon as I crossed the intersection, the arrows directed me towards a nice little bike path. 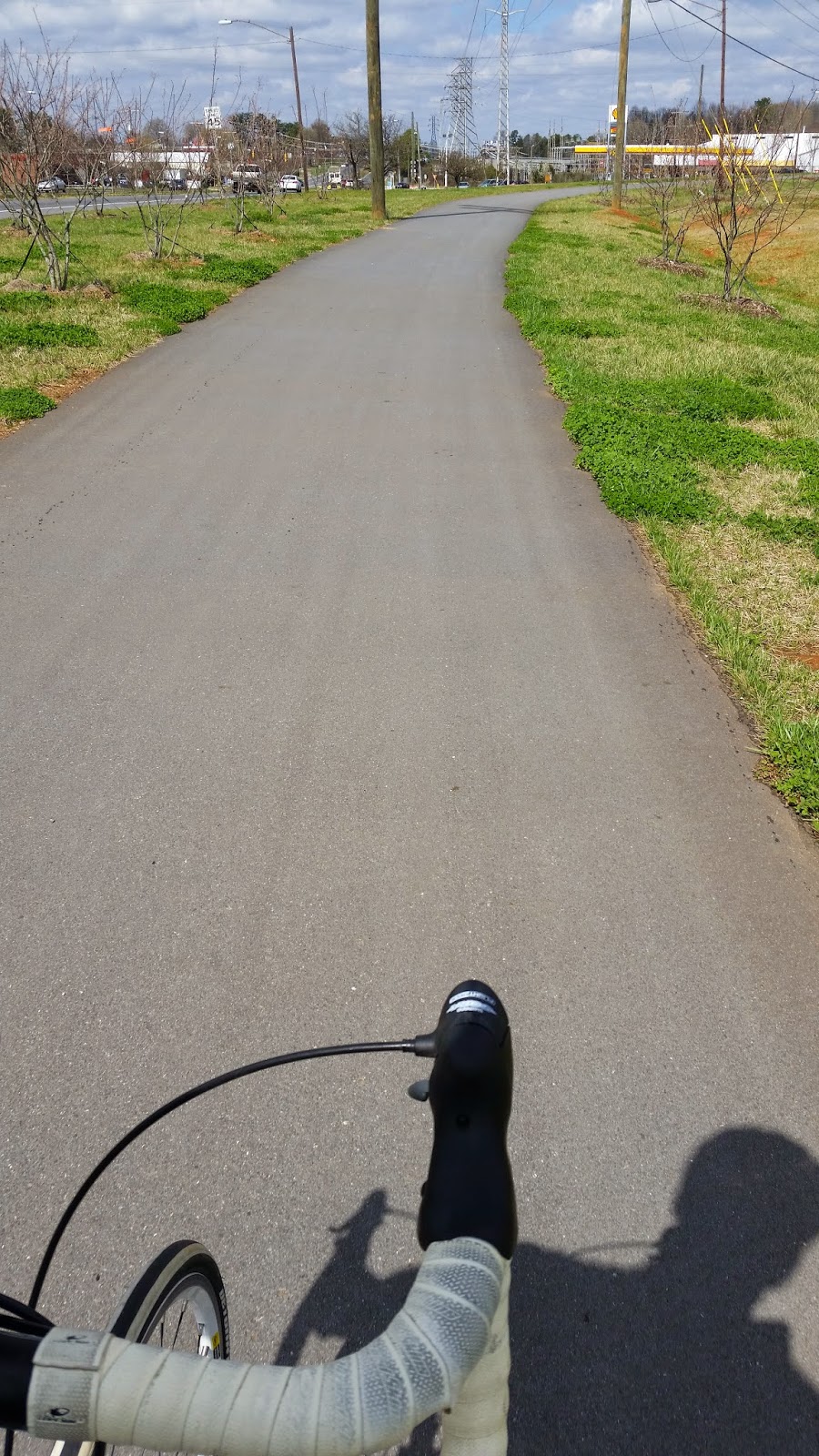 The rest of the ride was nice too, and I even stopped to get another picture.  This time is was sorta scenic. 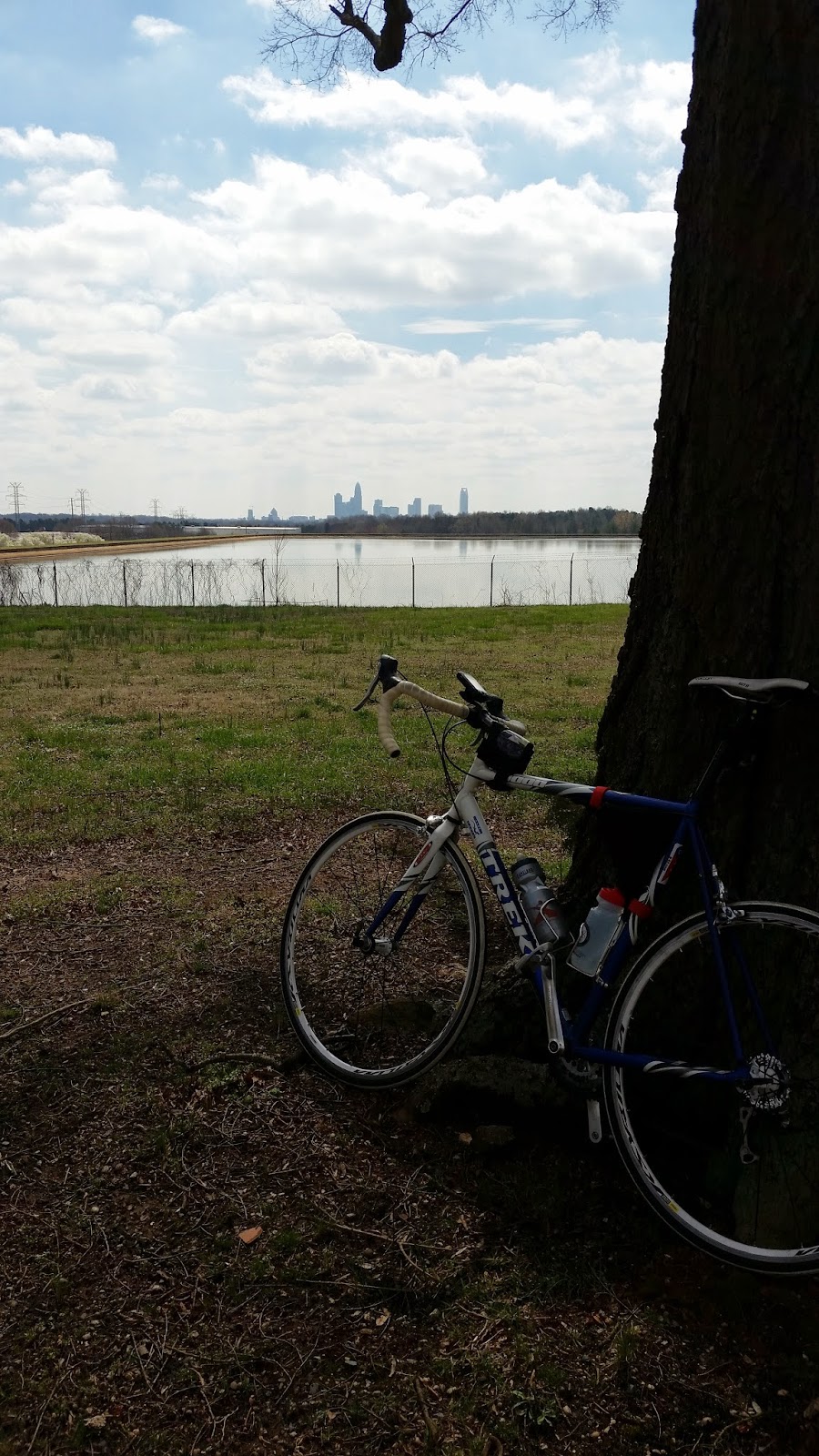 Once I got back home, I’d tallied 43 miles for the day.  Not bad, and I sure as hell didn’t feel drained.  It was really fun, and other than stopping at my destination and to take some photos I kept a pretty speedy pace.  I really enjoyed being out on the road on such a beautiful day, even if it was on skinny tires.  I was alone, on a bike, and had a ton of fun.