I've been using a dropper post (excuse me, drooper) for the last few years.  Three, I think. 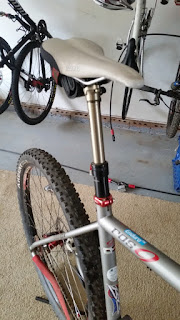 The problem is, I only have one and I have three mountain bikes.  It's difficult to go back and forth between drooper and non-drooper bikes, so I usually end up taking The Executor on rides where it's sorta overkill most of the time.  It's a big bike built for stuff like The Pisgah, but the drooper post makes it fun for local stuff too.  Well, I don't have to worry anymore, because now I haz solution... 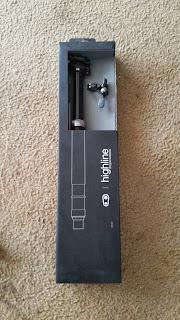 I picked this up back at CycloFest from the crankbrothers booth (they support me, you know) and I hadn't had a chance to figure out what to do with it.  Busy with the move, settling into the new house, etc. it became a low priority.  Now things are sorta "normal" again, so I decided to put it on one of my bikes.

I know some of you don't care much for crankbrothers, but I do.  They have been good to me, and more importantly, I haven't had any issues using their stuff (pedals mostly.)  The drooper thing was different though, because they failed miserably when they tried it in the past.  They will be the first to admit that too.

The highline drooper post (they use a lot of lower case on their website) was redesigned from the ground up, making it totally different from what they've done before.  Servicing is easy (Number One Bike Mechanic The Gentle Ginger said he was impressed), and it's simplicity leads to function without much chance for failure.

While a little pricey (like most droopers), it's cheaper than the one I'm currently using and hopefully will hold up a lot better.  I've had a few issues with that one, including a warranty replacement.  That company has good customer service too, I suppose.

Anyway, it was time to install it.  Since I wanted to put it on a bike that would see the most rugged testing environments, it was an easy decision to replace the one I'm using now.  If you are elite I probably offended you.  Who gives a shit.

So, what was in the box? 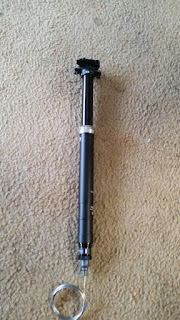 They also included all the hardware, a cable, housing, etc. and a set of instructions that would make Ikea proud... 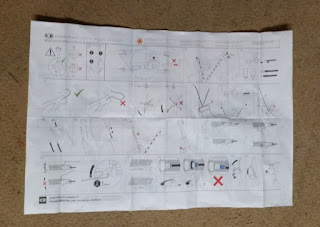 Instead of trying to decipher that nonsense, I headed to the CB website and found a whole bunch of links to videos.  I skimmed through the installation one and figured I'd seen enough.  If you want to watch it though, here it is:

It was actually pretty useful though, especially the part about measuring the cable housing and all that.  Anyway, I didn't take pictures every step of the way like I had intended.  Actually I only took two.

One of the cable housing coming out of the bike frame: 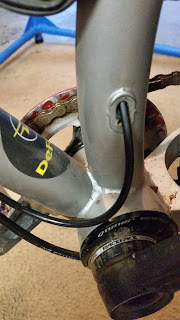 Stealth routing.  Rad.  My other one didn't have that.  Not their fault though.

The other photo I took during the installation was of the lever, which is pretty damn awesome: 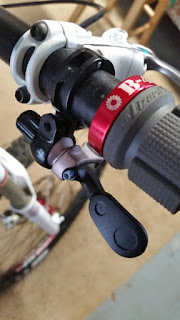 Way more comfortable than other droopers out there.  I dig it.

Total install time?  Maybe about 20 minutes.  I tested it out quite a bit too, since I have plenty of big ass rocks all over my yard from whence to drop.  Actuation is quite nice and very smooth...

and dat lever tho.  Nice.

Cheers to crankbrothers for making me all giddy about drooping again. 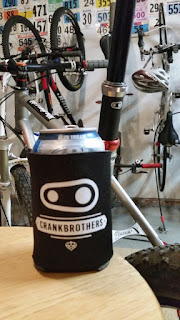 Yes, I'm a product whore.  But I'm loyal.  You don't find that much among bike folks these days.

Oh, and since I'm such a whore, here's another video to get you all excited about the highline:

I'm not selling or giving away the drooper I took off.  It's still decent, and I haz plans for it.