Yup, I’m in “training.” For what? I don’t know. Although I’m pretty close to being kind of sure about which version of the Tree Shaker I may or may not have decided to do, I still need to get ready to race. If getting ready means drinking lots of beer and hoping that my bike doesn’t fall apart, then I guess I’m as ready as I’ll ever be. I still need to ride, I guess, so Sunday I headed out to one of my favorite trails, Fisher Farm: 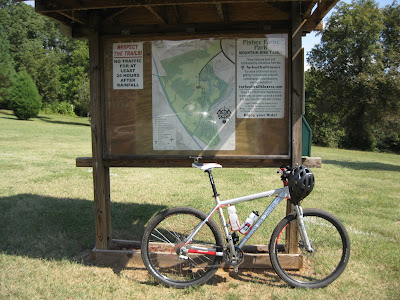 I was all alone out there, so the plan was to ride until I either got bored or I got too tired to ride anymore. When I ride alone the former usually happens. I started out with one medium-paced lap just to get the blood flowing. I didn’t get my heart rate up too high, and I felt pretty good. I wasn’t working hard enough to even take a sip out of my water bottles, so the next lap had to be harder. Without any kind of rest break, I started on my second lap.


This lap was much, much faster. I stood up and hammered on the climbs, and pretty much pedaled the whole time. I guess I was plenty warmed up, because I didn’t feel tired at all. I did drink a little water this time, so I must have been working a little harder than usual. As I started to approach the end of lap two, I started planning my exit strategy. There’s no way I would get in tons of mileage on the ~5 mile trail without getting bored as shit, but I forced myself to do one more lap before I called it a day.


Lap three would be different. With less than a week until the Tree Shaker, it would be impossible for me to make any kind of gains on my bike fitness at this point. I was really trying to make sure my bike would hold up, and I hoped that I would be able to find any mechanical issues in time to repair them. Anyway, this last lap would be more of a “scenic” tour of the trail. I hadn’t been there in about a month or so, and I noticed some “new” trailside features during my first two laps. Before I get into that though, I’ll start at the beginning (of lap three anyway.)


After the first mile or so, I was cooking along at a pretty good pace. Well, that is until I ran over this guy: 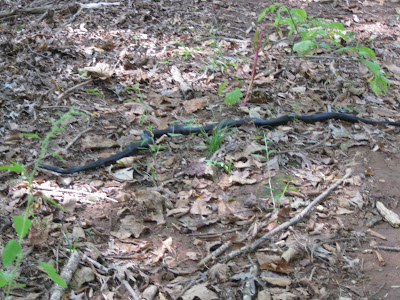 Oops. I wasn’t afraid (I like snakes), but I felt bad that I ran this fine creature over with my fat tires. I tried to apologize to him, but he wasn’t having it. Then I realized that snakes don’t have ears, so it was pointless to try to negotiate with him. Since he was in danger of being run over by the next trail user, I decided that I would remove him from the side of the trail and place him safely in the woods. I got a little closer to see if he was still pissed at me: 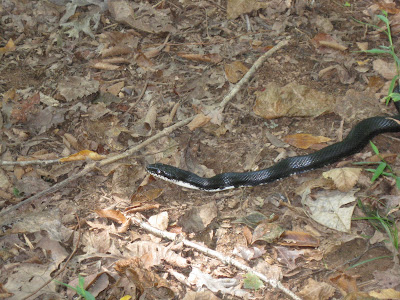 Being that close didn’t seem to bother my new scaly friend. He was actually pretty docile for a snake, so I quickly grabbed him and walked down into the woods to release him in a safe place. He thanked me in his snakely little way (by not biting me), and I was on my way. About 50 feet down the trail I saw something on the side of the trail, so I stopped again: 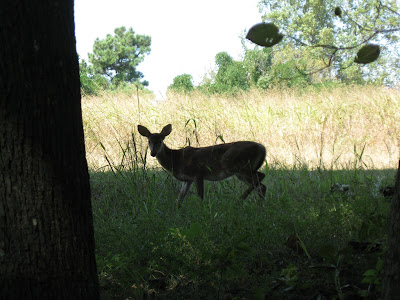 This deer just stood there and stared back at me, and we continued this for a few minutes. I asked if I could take another photo, and it obliged by telling me to kiss it’s ass: 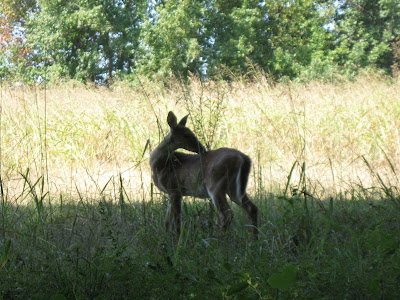 Just seeing a couple of nature’s creatures made my day. I was glad that I chose to do another lap, but the trailside features were far from over. Like I said before, there are some new things out there. A few miles into the trail, I noticed a little statue right where the blue and green trail splits: 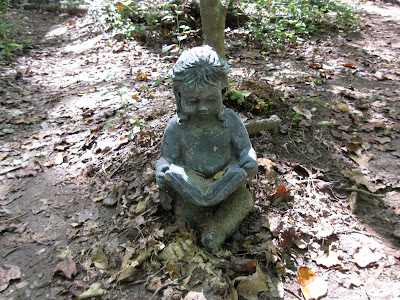 A little while later, I saw another deer. This one was not real though, so at least it wouldn’t tell me to kiss it’s ass this time: 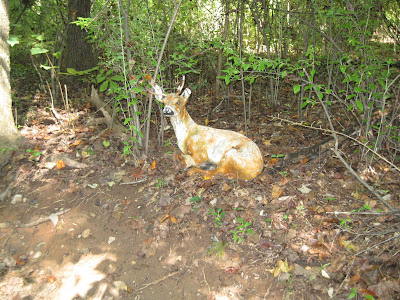 It was as if someone methodically placed these things along the trail for my enjoyment. This next “creature” had somewhat of a deformity though: 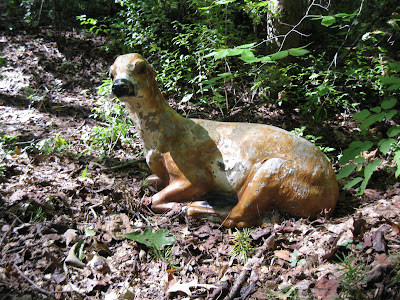 Rolling along, I saw another one of those angel thingys. I didn’t notice it on the first lap though, but I remembered where it was on lap two. On lap three I was ready for it: 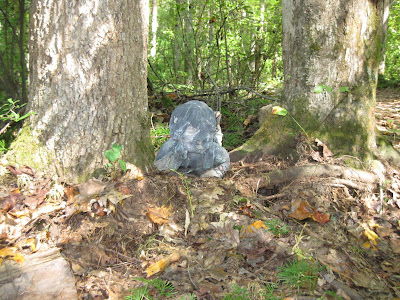 Just when I thought I had seen it all, this next thing popped up in my sights. 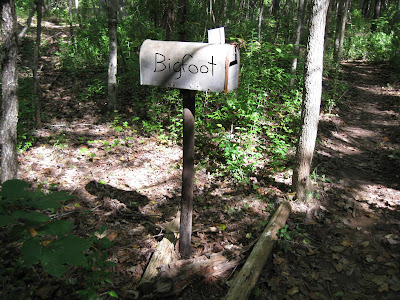 So that’s where the North Carolina Bigfoot lives. I never knew that. Maybe we should send him a postcard or something.


So, rather than bore you with a plain ol’ mountain bike ride on one of my local trails, I figured I would give you the ‘in-depth” tour. It was actually a nice ride, and I had zero, count ‘em zero mechanical issues. The trail was in the best shape I’ve seen it in a long time, and my legs felt pretty good. I don’t know if I’m ready for 6 or 12 hours of abuse this weekend, but at least I’ll be able to give it a shot. My decision will come soon, hopefully before I line up to start the race. You’ll have to wait, because I can’t make up my damn mind.
Posted by TheMutt at 8:13 AM

Email ThisBlogThis!Share to TwitterShare to FacebookShare to Pinterest
Labels: lawn ornaments, snakes on a trail, training