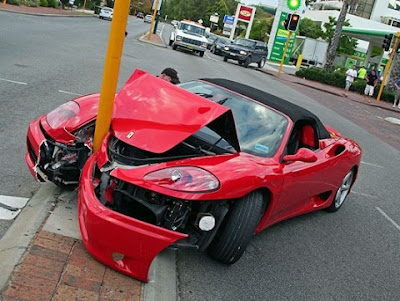 Even though that’s a Ferrari, this post is all about bike stuff. The photo above represents what could happen if I kept riding the brakes I put on my 29er, The Big O. When I built up my big-wheeled bike back in April, I cheated a little to git er done. I used sub-par parts when it came down the the finishing touches, and I’ve been regretting it ever since. The brakes were the main issue, but I’m just now getting down to replacing them. Here is what I’ve been riding: 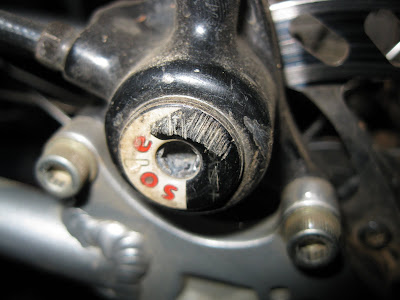 In case you can’t decipher any details from that shitty photo, I’ll tell you all about it. I’ve been riding on a pair of Hayes Sole hydraulic brakes. They are without question the shittiest brakes I’ve ever used, including v-brakes. I got them for next to nothing a while ago for another project I thought of doing, but when it came down to needing brakes for my 29er project (The Big O) I grabbed them. Big mistake. They are sort of a hybrid hydraulic brake, with manual pad adjustment on the calipers. They don’t do well stopping my 225 pound ass on big ass wheels. One could argue that I was faster riding with them, but I’ll tell you that I actually used more brake than necessary on more than one occasion. I did a lot of panic stopping, since I never really trusted them. 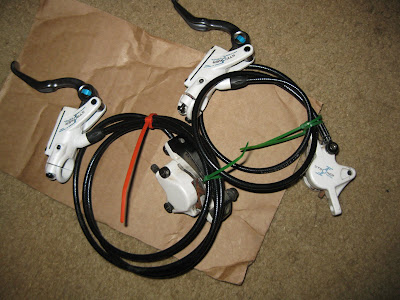 These are Hayes Stroker Trail hydraulic disc brakes. They’re not top of the line, but they aren’t even close to bad either. I read a lot of good reviews, and I’ve also talked to a few folks that use them. I got these brakes on the cheap (which is a huge plus), so I couldn’t pass them up. They have tool-free adjustable levers, which enables me to change the lever position on the fly. I like simplicity, so these brakes fit the bill so far.


Installation was a breeze too. So easy in fact, that I didn’t bother activating R2-D2 to help (I got my own beer this time too.) In a matter of minutes, I had removed my old brake levers, my custom Lizard Skins lock-on grips, and shifters to make room for the new brakes. I got everything installed on the handlebars, and then it was time to move onto the calipers. They were just as simple. Here is the result of my, uh, hard work: 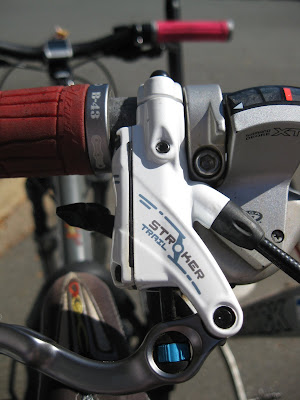 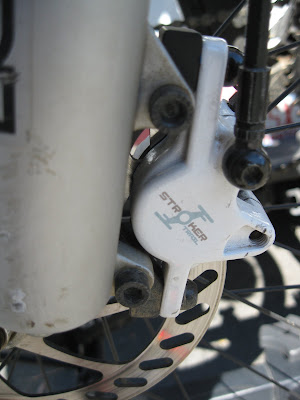 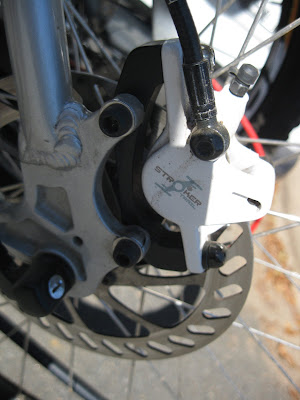 After a little tinkering on the work stand, I had them adjusted properly for optimum stopping power. I took a small test ride on the road in front of my house, and I was shocked at the difference. Actually I shouldn’t have been shocked at all, since the old brakes were worse than trying to stop my bike Fred Flintstone style.

Satisfied with the installation, I headed out for a little test ride. I went to North Meck, since it was close to me and the trail is really short. If I had some kind of catastrophic brake failure, then I’d rather not have to walk my ass off to get back to the trailhead. Anyway, the initial test ride was a success. I was actually faster, and I didn’t need to use a lot of brake power to adjust my speed before the turns. I’m happy with it so far, but a more in-depth test is in order. I have plenty of riding crap going on this weekend, so I guess I know for sure then.


Wait, and entire post about new brakes? Yup. I have to write something, and this is it. You can’t expect me to shit out a gem every time I sit here to write stuff, can you? Now, go find something more productive to do with your time, since you’ve wasted enough of it here.
Posted by TheMutt at 8:16 AM