Where was I? Oh yeah, dragging out another race report. When I left off yesterday, I was having second thoughts about going out for my second lap. It was so shitty the first time, that I was less than happy about. In fact, I was madder than a three legged cat trying to bury a turd on an icy lake. I went out though, hoping for the best.


You know what? The trail was totally different. I was if the muddy conditions never existed. I was shocked, but more than happy to have a trail to ride that wouldn't throw me off of it like the first lap. I had crashed four times on lap one, and my battered, broken body was happy to be able to just ride along. I picked up the pace, and I was actually having fun this time. 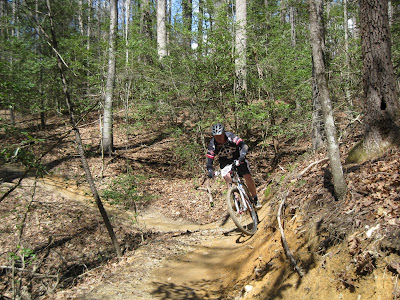 
Seeing my kid out on the trail snapping photos helped a little too. He saw the look of disgust on my face when I headed out for lap two, but he knew this one would be better. I was able to ride at a good pace, but I had lost so much time on that first lap that it didn’t matter anymore. I would never gain any significant ground, but at least I was enjoying myself. In fact, I even got to ride with my Bike29 teammate, Dicky. Huh?


Yeah, of course he lapped me. When I let him by, I decided to speed up and get on his wheel. I stuck with him for a while, and I shouted out that I never get to ride with him and this was my chance. That was definitely not my “endurance race pace”, but it was fun to go that fast for a bit. When we got to a long climb though, he dropped me like a sack of dirty diapers. Since I probably outweigh him by 75 pounds or so, it was expected. Oh well, it was fun while it lasted.


I came in from that (much better) lap, and swapped out my bottles. I felt pretty good, aside from my crash injuries on lap one. I took a small break and headed back out for one more. I had told Lunchbox to meet me at the rock garden (near the end of the course), so I was working hard to get there as fast as I could. I was surprised at how good my legs felt, as I was able to climb with plenty of power still. All was not well though, because my knees were giving me problems. Also, my back had tightened up a lot, and that made it hard to sit and climb. I found myself counting down the miles to go, giving myself encouragement along the way. Once again Dicky passed me, and I rode with him (a lot less that time though.) When I finally got to mile 12, I knew I was almost there.


The funny thing about these mountain bike races is the amount of roadie types that show up. I don’t understand why someone would want to spend all that time on a trainer, riding on the road, and attending spin classes to to do well at mountain bike races. Sure, they train hard, have plenty of power and endurance, and can ride fast, but they have trouble on the technical stuff. I noticed this all over the trail, but it was really obvious in the rock gardens. 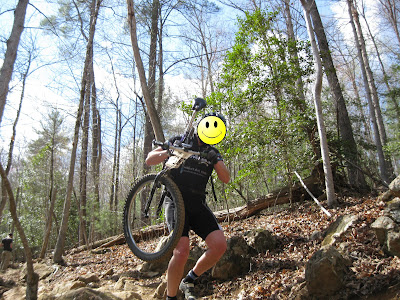 Photo altered to protect the innocent.

Okay, maybe that guy wasn’t one of those roadie-types, but you get the idea. I ride my mountain bike to train for mountain bike racing, and I actually have fun doing it. That’s what it’s all about anyway, isn’t it? I got through the wicked garden with no problems, by the way. 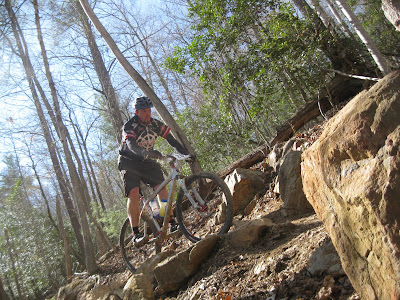 I got skills (sometimes.)

That was the home stretch. Lunchbox cut across the trail in a mad fury, just to get another photo of me racing to the finish. 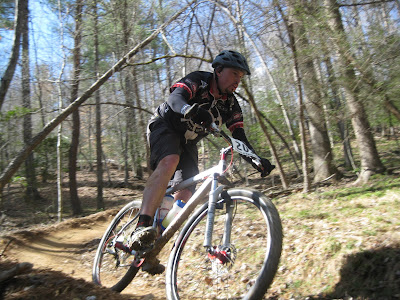 I had plenty of energy left, even though my knees and my back were hampering my riding ability. I crossed the finish line, with no more time left. I only did three laps, but they were hard fought. Since they lengthened the course from last year, I actually surpassed my mileage from before. I was pleased, I guess. At least I stuck in there and didn’t quit like I wanted to on the first lap. I think I finished around 200 out of 300 and something, and 60 out of like 99 in my class. Yeah, it sucks, but it’s good enough for me. That is the furthest I’ve ridden this season so far, and definitely the longest (distance-wise.) I’ll be back next year for sure.


It was a long day, and I was beat up. I have bruises all over from my crashes, but at least my knees and back have recovered. I will live to ride another day. Lucky for you, because you still get to read all about it. Okay, maybe that’s not so lucky.


P.S. Don’t give me any shit about the roadie stuff (or you can, I don’t care.) I’m out there to have fun, but I think some of these guys take themselves way too seriously. I always try to do my best, but the main goal is to enjoy myself on the bike (even when I’m suffering.) If you’ve been around here for a while, then you already knew that about me. If not, then now you know. Don’t get your spandex in a wad, okay?
Posted by TheMutt at 7:57 AM

Email ThisBlogThis!Share to TwitterShare to FacebookShare to Pinterest
Labels: 6 Hours of Warrior Creek, dragging it out, Endurance racing

Nice report. Glad you had fun after suffering through that 1st lap. Its okay - rib the roadies. Rocks are fun! :)

Warrior's Creek is that one trail EVERYONE loves at first....the only ones that KEEP loving it are either 1) roadies, 2) locals or 3) mountain bikers who only ride it once a year!