First off, I’d like to apologize for the piss poor excuse of a blog post yesterday (they're all piss poor, but that one was worse.) While it was neat that I could blog from my phone, I didn’t really have time to make it interesting. The Man was holding me down, but today I’m free to post as usual. Sometimes work gets in the way, and that’s just fine. At least I have a job, and it does pay the bills to allow me time to ride my bicycle and blog about it. Mr. Shepherd was kind enough to post up something on Sunday, so at least you had something to read.


Now, back to the main event.


On Saturday, Little Miss Sunshine and I planned on hitting up Anne Springs Close Greenway in Fort Mill, SC. We loaded up the bikes around lunchtime, but I got called into work for a little while (I was on standby in case some shit went down.) I left LMS with her bike, and told her that I would meet her down there when I was finished. At around 4:30 or so, we finally got on the trail. 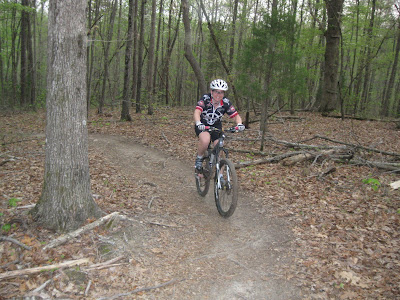 It was a nice ride (at first.) We had a reason for riding that particular trail, but I won’t get into that just yet (probably next week.) Anyway, about four miles in we noticed that the sky was getting a little shitty looking. We knew there was supposed to be a storm rolling in, but we thought there would plenty of time to get a ride in. However, the sky quickly turned to this: 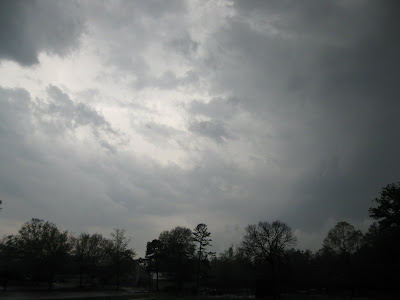 We high-tailed it back to the trailead as quickly as we could, but not before the rain started coming down. I didn’t want to damage the trail by riding it wet, but with the bad weather coming in it was the quickest way out. In addition to the rain, there was thunder and lightning aplenty. I briefly thought of taking shelter in one of the several tunnels out there, but we decided it would be better to just get the hell out of there. The weather got worse though.


Suddenly, hail started falling from the sky. At first, it was about the size of marbles, and few and far between. Then, it came down hard and heavy. The size increased to golf ball sized, sprinkled in with ones about the size of a baseball. They beat the shit out of us while we rode out of there, and it looked like there was no letting up. We had no choice but to keep going.


I kept hearing (and feeling) the hail strike my helmet, and I was getting the crap smacked outta me all over the rest of my body where there was no protection. Little Miss Sunshine toughed it out too, but we started to wonder if we’d make it out of there. It was a little scary, but we couldn’t stop. I started to feel like we would be stranded out there like freakin' Gilligan or something. Eventually I saw some lights beyond the tree line though, so we cut the trail (we could hardly see it anyway) and made our way to a parking lot of some apartment complex. We weren’t back to our vehicles yet, but at least we could find shelter if we needed to.


As soon as we exited the woods, the hail stopped. The rain was still coming down though, but we were relieved not to be getting beat up by frozen chunks of ice. After a short ride down the sidewalk, we made it back to the parking lot (just as the rain stopped.) We were glad to make it out of there alive, especially since the weather had chilled for a bit. It was still kinda creepy out there though. 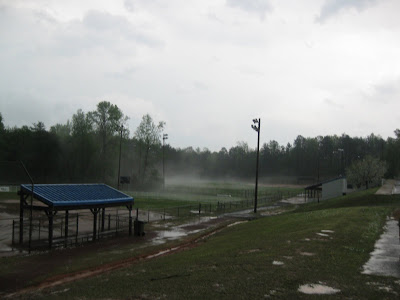 I suffered some hail damage on my truck, but I only got one photo of that. 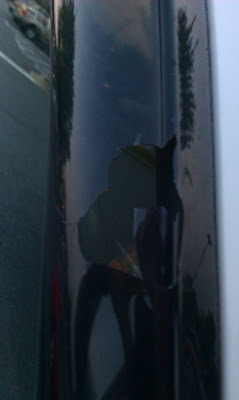 Just before we packed up, I walked up to the trail to snap a photo of the icy shitballs. 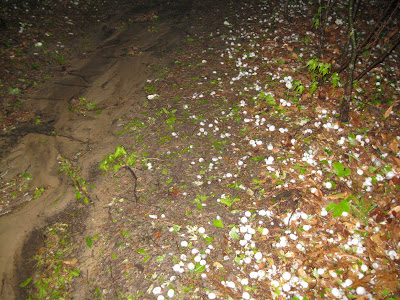 It was much worse than that on the trail, but I wasn’t about to stop and take a picture while we were trying to get out of there. There was so much hail in some spots that it looked like it had snowed there. I ran back to my truck right after that photo was taken though, because more of the shit storm was on the way. The sky turned black as night, and the power went out at the complex where we parked. We got out of there just in time for the next round, and headed to a local watering hole to lick our wounds and enjoy a little liquid refreshment. 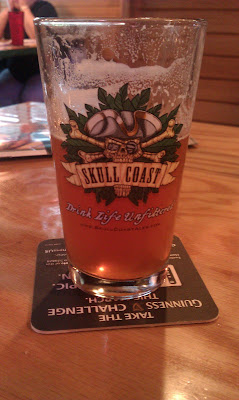 In all, we got in about eight miles. Half of it was fun, and the other half was scary as hell. Looking back, it was a little fun to ride in that mess, but I wouldn’t do it again if I had the choice. You can’t really predict the weather around here sometimes, but maybe we should have stayed a little more local for our ride so we would have finished well before Mother Nature unleashed her fury. I do stupid shit all the time, so this was another thing to add to the list. At least I got a ride in over the weekend though.
Posted by TheMutt at 8:23 AM