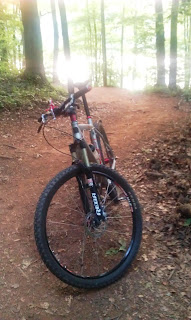 Is going for a bike ride in the woods.  Yesterday, I headed out to the U.S. National Whitewater Center for an after work ride on my single speed.  There were no special plans, other than the fact that I wanted to check out a new trail out there.  The new trail was bitchin’, but I’ll save that for another time.

A co-worker of mine has been talking about riding mountain bikes with me for a while now, and he really seemed interested in riding at the since he lives pretty close to there.  While he does have a bike, I never really thought he would ride with me.

He thinks I’m some kind of expert (since I race and junk), so I guess that’s a little intimidating to someone getting started in this sport.  He mentioned that he might go home and grab his bike, and meet me out on the trail.  When I finished the new trail out there, I was pleasantly surprised when I got a call from him.

I met up with him and took him on a short tour of some of the easier trails out there.  We took a few breaks here and there, but he did a pretty good job for someone that hasn’t ridden a bike in years.  I kept asking if he wanted to stop, and he kept telling me that he wanted to ride until he couldn’t go anymore.

So, like any good teacher, I took him on one of the more advanced sections.  The log skinnys, giant roots, rocks, and drops were fun for him, and he actually had a great time on the climbs.  Now he’s even talking about getting a new bike so he can enjoy it a lot more.

I really love getting people hooked on this sport that I love so much.  The joy I feel out on the trail is something I want to share with everyone.  You don’t need a fancy bike, a pro cycling kit, or even supreme fitness to enjoy mountain biking.  You just need a little dirt in the woods.