No Rest For The Wicked

My back is still pretty sore, but I can’t really afford any time off the bike to rest.  I’ve been doing my best to get myself right again, but it will probably be a slow process.  Even though I didn’t have the greatest race on Sunday, my effort was good enough to bump me up to 3rd in the overall standings for the series.  I guess that’s okay, but it also means that I have a long road ahead.

I found two reasons that Sunday’s racing fiasco transpired.  For one, the Dirty Party Cycle grabbed one of my tires when I loaded the bikes up after the race, and noticed that I had way too much air in them.  That’s one of the things I forgot to check before I started, and it probably made the ride a lot rougher than it should’ve been.  I think I had a hair over 40 p.s.i. in there, which made the roots beat me unmercifully the whole time.  I guess I better check that shit from now on.

Also, I somehow managed to forget my music playing device.  As soon as I started slowing down due to the pain in my back, I realized that I was riding in silence.  I heard every root go right to my back, and that made it much more painful.  At least with music, I would’ve had something to take my mind off of it.  I got there Sunday morning with plenty of time to get ready, so there was no excuse.

I don’t know what the hell I was thinking trying to race anyway.

I forgot to mention one other thing, although it doesn’t relate to my race at all.  My pal D-Wayne didn’t show up, because he was busy racing his bike somewhere else.  He did have his better half pass along a gift though: 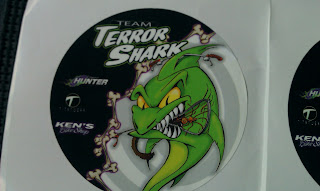 He made this sticker, since he is a fancy designer.

Very nice, and much appreciated.

I did some other stuff over the weekend (besides racing), but I’ll get into that tomorrow.

Here’s a little hint for y’all: 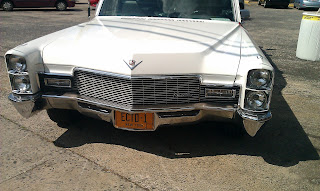