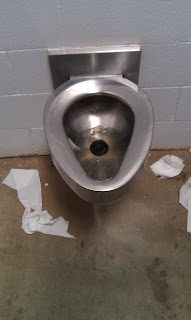 Okay, I won’t take today’s post in that direction, although my race yesterday was certainly in the crapper.  I guess I was referring to my position in the race before it all fell apart. 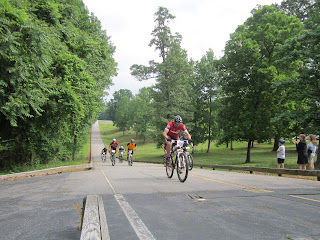 Yeah, I sprinted up that damned Derby Hill.  I didn’t mean to do it, but somehow I ended up around 2nd (hence the number two reference.)  I felt good lungs and legs wise, but something else happened when I got to the top… my back kinda locked up.

I’ve been a little sore in my lower back area this past week, but I figured that once I got going in a race that it would work itself out.  That wasn’t the case, and I quickly dropped to 3rd in the race, with the rest of the pack gaining fast.  I was in pain no matter what I did, and I wasn’t even a mile into the race.

I lost a few more places, but kept riding along.  I wasn’t about to quit.  In fact, the only way I would get out of there without crossing the finish line was if someone carried me out.  I “raced” on, and a few miles in I saw my kid hiding in the bushes again. 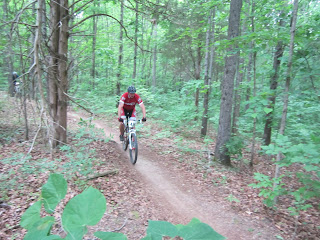 At this point I was still in 6th place, and I just knew I would eventually work my way back to DFL.  I didn’t care, since my goal was just to finish.  Once again another guy in my class went by, and there was another right on my wheel waiting to do the same.

The seven mile lap actually went by pretty quickly even though I wasn’t riding very fast.  I started to loosen up a little towards the end of the first lap, so I slowly started picking up speed (and losing the guy behind me.)  I crossed the start/finish line at full sprint, but that stupid ass hill was waiting for me.

It didn’t matter, because I actually climbed it pretty quickly.  The guy in my class that had been on my wheel was gone, so I started thinking about catching up to the rest of the group.  About four miles into lap two I caught a glimpse of Rodney, and I heard him yell, “Come on, Chris!”

Weird.  I’ve never seen anyone cheer for someone that was trying to catch them.  It’s all good though, because he’s just that kinda guy.  In fact, the guys in my class are all pretty good guys, probably because most of us don’t take ourselves too seriously.

I later learned that there was no way I was catching up to Rodney, since the switchback action on the trail made him appear a lot closer than he actually was.  I still felt good about the fact that I was able to pick up the pace a little bit though.  When I saw my kid waiting in the bushes again, I knew I was almost at the end. 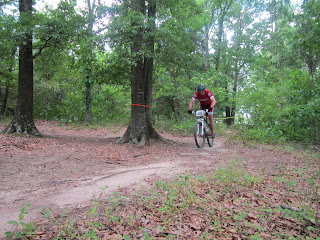 I sprinted out to the finish line, and crossed the line in 7th place.  As I tried to spin around for a minute to cool down, my back got really tight and I had to stop and stretch before I fell over.  I felt like shit, and immediately started thinking about how I could get myself right again.  I stretched a little more, and I was finally able to walk back to my truck and change.

I needed some medicine for my aching back, so we got the hell outta there and headed to downtown Winston Salem.

I found the perfect remedy for a shitty race. 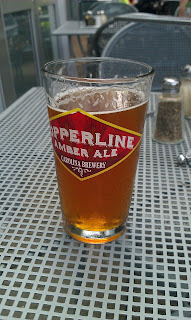 We sat around and enjoyed the nice weather, and I even gazed up into the sky for a while to forget about my ailment. 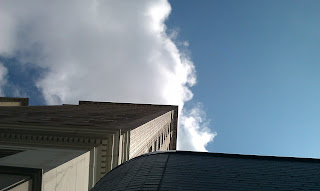 I finally did start to feel a little better, so me, Lunchbox, and the Dirty Party Cycle (did I forget to mention that he was there?) took a walk around the downtown area. 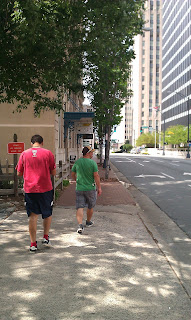 It was good to stroll around the city, and we even found out where the Super Friends have been hiding. 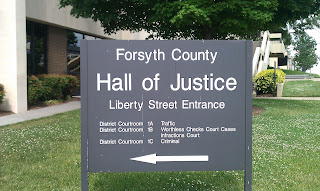 Now if I could just find the Legion of Doom…