Fixed It Right This Time

With the chain dropping issues that both Lunchbox and I experienced during races, it was time to take care of that shit once and for all.  And no, I didn’t put the full set of geared shit back on.  I’m talking about the N-Gear Jump Stop.  Two of them arrived at the B-43 Worldwide Headquarters and it was time to put them on.

That other shit had to go. 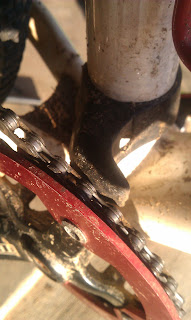 Rather than take the time to wash both of our bikes before the installation, I cheated a little.  I used a Pro Towel from ProGold to get the grime the hell outta the way. 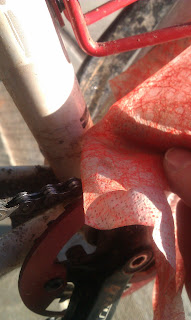 The Pro Towels worked great, even though our bikes probably could’ve used a good washing.  I eventually washed my bike, but if you don’t feel like washing and want a quick clean up the Pro Towel is the way to go.

Anyway, I installed the new chain retention device and adjusted it. 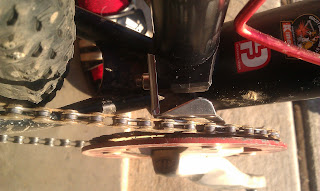 I still needed to clean my chain though.  Don’t worry, I did.

Anyway, since I did this over the weekend, I needed to test it before I raced last Sunday.  We figured that the best place to test such things would be on a short, social ride during the Tarheel Trailblazers ride and cookout last Saturday.  The trail down there had plenty of roots, and I was pleased with the performance of my new N-Gear Jump Stop.  No chain issues at all, and if you recall, I didn’t suffer any during my race either.

We didn’t just ride down there though.  In fact, we spent most of our time off the trail. 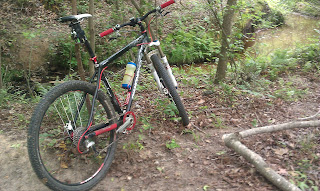 Lunchbox wondered why we weren’t really riding much. 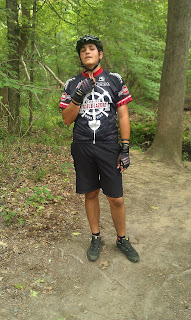 This little guy is the answer: 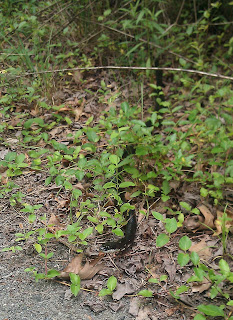 Actually, he wasn’t a little guy at all.  We stopped to play with our new found friend, and it seemed like we may have spooked him a little.  When I tried to pick him up, he wasn’t having it.  He just kept trying to get away, so I let him get the hell on.  He was about six feet long, and his body was so big that I had a hard time getting my hand around it anyway.  Maybe he just ate a big meal or something.

We ended up leaving him alone, and looked around for more snakes to play with.  It didn’t take long to find this peculiar looking feller on the trail. 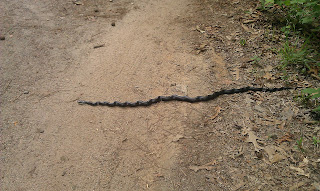 This one was a little smaller, and a whole lot friendlier.  He didn’t seem to mind me handling him, and we both stayed really calm.  I even got to help him climb a nearby tree. 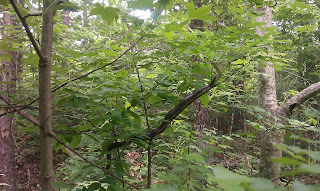 Before you get your panties in a wad, I like snakes.  In fact, I’ve been handling them since I was a little tyke.  I have plenty of experience with snakes, and even once dreamed of being a herpetologist when I grew up.  Now I just dream about growing up.

The ride/snake wrangling session eventually ended, and we joined the rest of the partygoers for some grillin’ and chillin’. 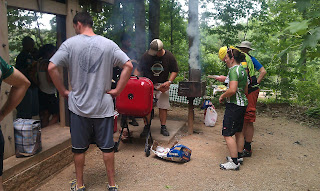 After that, we headed over to Free Comic Book Day.  Wait, what?  Yeah, Lunchbox is a pretty big comic book fan, so we make a point to hit up a few local comic book stores every year on the first Saturday in May. 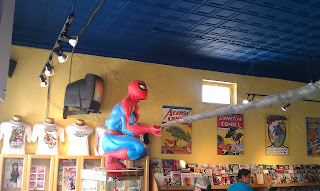 I don’t read comics anymore, but there was still plenty to see.  The Ghostbusters even made an appearance. 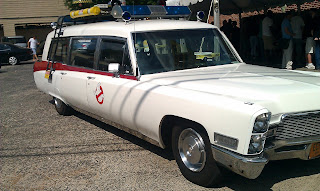 I ain’t afraid of no ghost.

That’s enough for today.  Bike mechanicin’, snake wrangling, and ghost busting, has worn me out.  Plus, I rode last night with the Dirt Divas and didn’t even talk about it.  Damn.