I’m Supposed To Be Taking It Easy 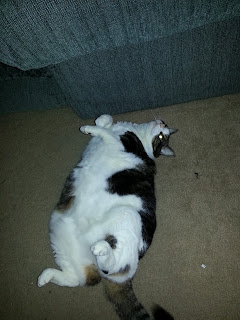 Even though I was here on Friday, I took the day off of work.  After three plus weeks of feeling shitty, I finally caved in and took a day to rest.  I slept in a little, napped throughout the day, and hoped that the antibiotics I was taking would help me get better.  In the middle of the day I started to feel a little better, so I headed out to the garage for a little bike work.

For some reason, I hadn’t touched my single speed in a while.  Having a bike with gears made it easier to slack off on my rides, so I spent a lot of time on it the past few months.  Plus, I wasn’t really digging the rigid fork I put on it.  I’m not saying that a rigid fork isn’t for me, but the thought did cross my mind.  I still have a lot to learn as far as front tire pressure and bike handling over rough terrain, and in my current condition I thought it would be a good idea to replace the rigid fork with a squishier version.

I’ll put the rigid fork back on eventually, but I think I need to get a different tire up front first.  I’ve been looking at putting a big fat Maxxis Ardent on it, in hopes that it will dull the pain a bit.  I’ll get on that really soon.

In other news, I built myself another “play” bike.  I say “play” because it has really tiny wheels. 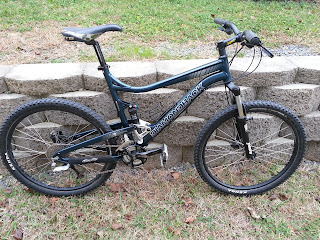 I attempted to part this bike out, but I had trouble getting rid of the frame.  It’s an XL, and coupled with the small wheel size there just wasn’t a market for it.  So, I dug through my parts collection and found enough shit to bring it back to life.  You won’t find me racing this beast or even riding it in the mountains, but I will use it to play on some of our new “secret” stuff.  I’m a little scared to ride such a tiny bike, but I think it might be fun every once in a while.

Oh yeah, I’m not fully recovered yet.  I feel a lot better, but I would put my health at 95 percent.  I was able to get out this weekend for a nice ride, and I even did some trail work.  I’m easing back into this stuff, in the hopes that I won’t return to my sickly state.  If there’s any good that’s come out of my illness, it’s the fact that I haven’t put on my traditional offseason weight.  This time of year I’m usually up to about 235 pounds (with more to go), but not I’m pretty happy that I’m going the other direction.  My “in-season” weight is right at 225 pounds, but I’m actually lower than that right now.  The scale at the doctor’s office said I was 222.  I hope I get better soon, or else there will be one less Clydesdale on the racing circuit.

I better start drinking more beer or something.