After “organized” trail work on Saturday and a nice little ride (and beer) afterwards, we weren’t done.  TomTom and I headed over to “The Trail” (it still doesn’t have a proper name yet) for a little recon mission.  With the first phase nearly completed, it’s time to cross a creek and head out into a giant piece of land that will make all of our wildest dreams come true.  Since we spent the day doing other things, we didn’t get out there until just before dark.  We started walking the new section and flagging a little bit, but it was getting so dark out there that it was difficult to see the contour of the land.  We decided to call it quits and come back the next morning. 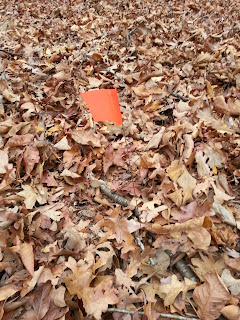 I could barely drag my ass outta bed, but when I finally did Lunchbox and I headed over for another workday on our soon to be local epic trail system.  TomTom was already there, and Good Guy Greg had showed up again to help.  We decided to check our work from the night before, and keep flagging new trail until we ran out of flags.

It was a simple process.  Eyeball where we thought the trail should go, and put flags in the ground. 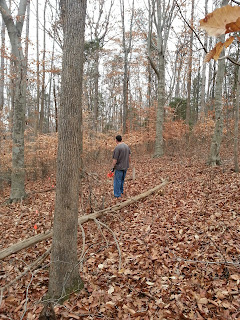 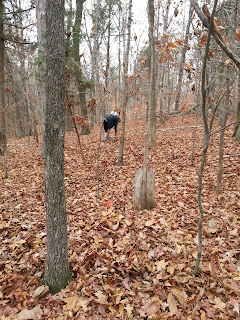 We we finally ran out of little orange flags, we headed back to the main trail for some more clearing and benching work.  By that time, Irish Luke had showed up ready to help. 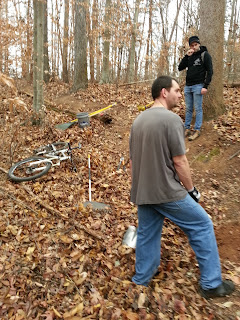 Holy shit.  We actually have sort of a real crew out there, and we’re starting to get somewhere.  Good Guy Greg and I rerouted a turn, and by the time we finished it was time for me to go (I had some other non-biking shit to do.)  Good Guy Greg left shortly thereafter, but the work didn’t.  TomTom texted me later and told me that they finished the creek crossing, and they also put in new trail across a nice rocky section that looks like you’re in the mountains.  He also told me that Irish Luke put in an optional line over some really rocky shit that is “very BYT like.”  They are calling it the Irish Graveyard.

I’m really excited about the possibilities we have out there, and the work that’s been done so far.  My only regret right now is that it’s dark when I get off work, so the only time we can get out there is on weekends.  I guess that will have to do for now, but when the daylight starts becoming more plentiful I imagine that we’ll be out there a lot more.

I love it when a plan comes together. 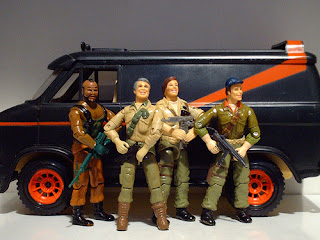 Wildest dreams, huh??? So you REALLY think that EVERY Washington Redskins player over 200 lbs is gonna show up for the USAC MTB Clydesdale World Championships in 2013 and bow down as you bunny-hop the ENTIRE Irish Graveyard?