Did You Lose Weight?

For some reason that’s all I heard at yesterday’s first Winter Short Track race.  Yeah, I ballooned up to 245 at the start of last year’s race, but I quickly got down to 225 and stayed there (where I am now.)  Maybe my sexy new Drunk Cyclist jersey has a slimming effect or something.  You know, because they know the people that wear that jersey like to consume alcoholic empty calories.

But I did look pretty good in it, regardless of whether or not I “lost weight.” 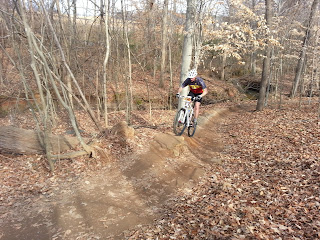 It was also the racing debut of my shiny white geared bike, TK-421. 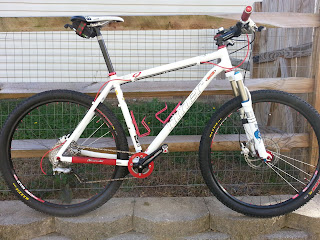 Anyway, no one cares about that.  I raced, which was something I wasn’t even close to being ready for.  I didn’t have high expectations, but I knew I would get out there and try my best anyway.  As usual I tried to take off full speed, but this time I just didn’t have the power to keep up with the lead group.  When we hit the singletrack, I was somewhere in the back.  I was behind a bunch of brake grabbing dirt roadies, and after only a minute into the race, I was frustrated.  When we got out of the singletrack and onto the fire road climb, I tried like hell to get by the group.  I wasn’t far behind the leaders, but my legs didn’t have enough power to chase them down.

I would have to spend the rest of the race trying to catch up, it would seem.

On lap two, I started passing riders in the class that went out in front of ours.  It sucked for the most part, because they were also riding their brakes on the downhills.  Plus, the time it took to get around them just put the leaders that much further ahead of me.  I was still feeling okay, but the legs weren’t fully recovered from the Death Virus 2012.

Still though, I was having fun. 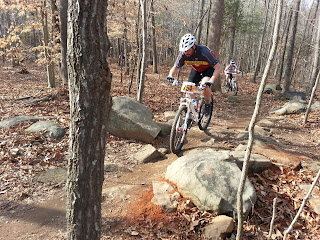 TomTom gets the cred on this one too.

No matter how hard I tried, I just couldn’t catch the leaders.  I saw them every once in a while, but my legs wouldn’t let me put the power down.  After thirty minutes of racing, I finished in 11th place.  I don’t remember how many others were there, but it ended up being a mid pack finish.  Not bad, but not too good either.

I have a long way to go, but at least I don’t have to lose any weight this time around.

Oh yeah, there’s another race that needs to be covered too.