This is not about one of my favorite albums from way back in my youth by De La Soul.  I’m talking about my solo mission to work on “The Trail” after a good rain. 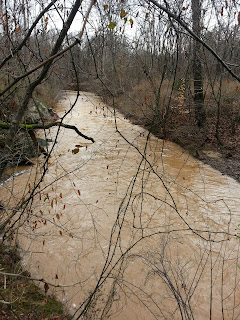 The creek was pretty high (it’s usually a little more than a trickle), and I was concerned that the trail would be in sad shape.  There’s another creek in the woods that flows into this one, and it was overflowing as well.  I sorta ruined our rock-armored crossing. 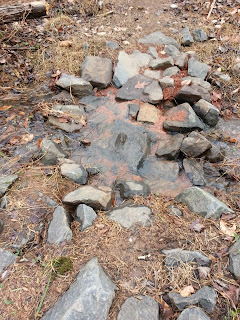 And it cut right through a low spot we had to go through. 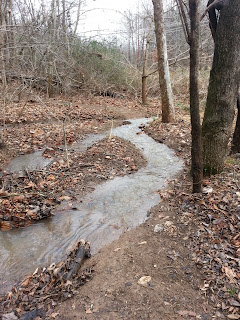 Eventually we'll put a couple of bridges through there.

The rest of the trail was in pretty fine shape, with the exception of the end of the Irish Graveyard. 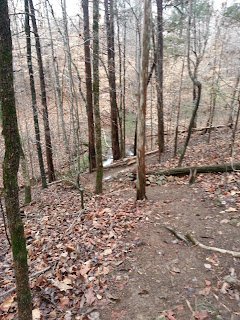 The good news is that there’s more work to be done on that part.

I decided to walk to the end of the trail and keep pushing.  The trail held up pretty well for the most part, and the moist soil made cutting new trail pretty easy. 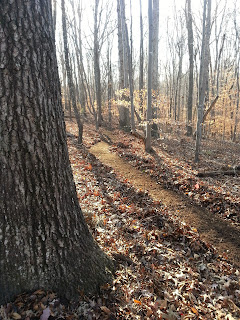 And I had a little helper that followed me around for the few hours I spent out there. 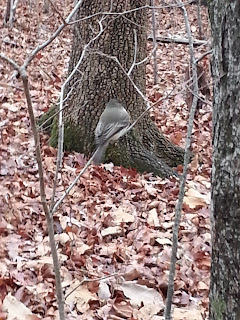 Fast forward to this past Sunday, and we were out there again for yet another work day.  This time though, we had a new recruit. The Space Cowboy decided to forgo a ride and get dirty with us.  His much appreciated extra, yet soft and girly hands helped us get quite a bit more trail cut in, and we even built a new feature that will forever be known as The Space Cowboy Jump. 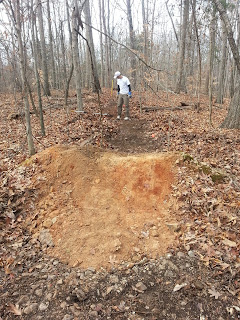 We also cut through another rock section that leads to a natural rock jump, because TomTom had his heart set on using it.  I think it will be really fun. 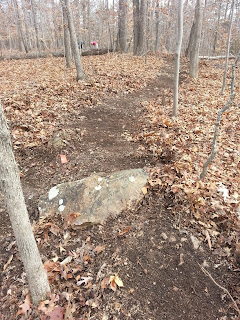 We worked really hard out there.  And by worked hard I mean texting, telling stories, and standing around. 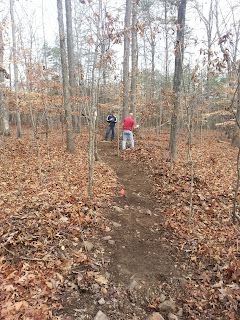 When the “work day” was finally coming to a close, we decided to walk down the hill to see where the new downhill line will go.  You see, now we’re at the top of the hill, and this part will be fast, flowing, and even kinda dangerous.

It all ends with a rock drop off that would make Irish Luke very proud. 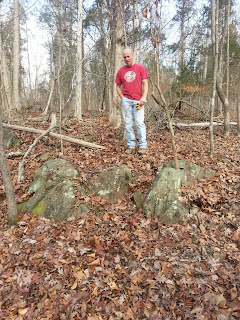 We’ve completed well over a mile of quality, hand built trail now, and if you use some math skills you can figure out that as an out and back you can get in over two miles of fun in the woods.  It’s not ready for the general public yet, because we want to get lot more put in before everyone starts using it.

But, we can’t keep everyone off of it right now. 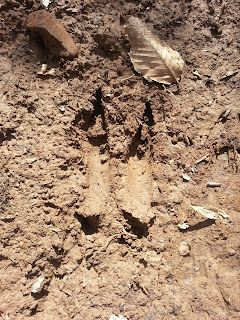 It’s not a huge secret by now, but we’re still keeping this as a “limited invite” trail for a while.  If you want to ride it, the only requirement is that you come out and help build it.  If you’re local, you know how to get in touch with me.

We’ll even provide the tools. 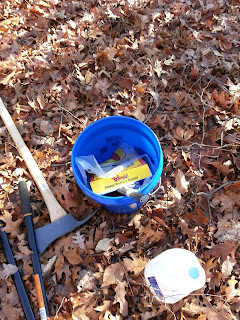 You bring the biscuits though.  I can’t afford to feed all y’all.