I Can’t Take This Anymore

It’s been raining here…a lot.  That means that the trails are closed, and any chance of riding my bike in the woods while I was away was pretty much gone.  I feel like I wasted most of my days off from work staring out of the window waiting for the rain to stop, and it was driving me batshit crazy.

Something had to be done.

When our yearly New Year’s Day ride was cancelled due to rain, I decided that I had enough and needed to find a way to go ride.  I nearly grabbed my road bike (even airing up the long since flat tires), but I thought better of it.  I don’t mind riding in the rain, but riding on the road in the rain is asking for trouble because people around here drive like shit.  I needed to get out on my mountain bike, and I have too much respect for the trails that our club builds and maintains around here.  If you like to poach the local trails because you think you’re an exception to the rule, then you’re an asshole.  You probably don’t do any trail work anyway, and rely on everyone else to do all the work while you get in your hot laps.

Anyway, the only option I could come up with was an urban ride.  I grabbed my bike light, a backpack, and my single speed.  I took off without any kind of plan, and immediately found myself riding around in the woods across a power line cut near my house.  That little jaunt didn’t last too long. 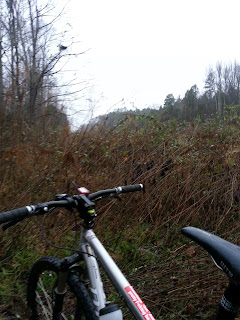 I turned around, and decided that I would make the ride a little more interesting.  I hit my usual urban spots near the house, and made a quick run to the store for some beer.  I picked up a four pack of Sierra Nevada Torpedo tall boys, and got on my way.  I headed through a few more parking lots, and somehow ended up in the woods again.  This time though, I knew there was some trail nearby. 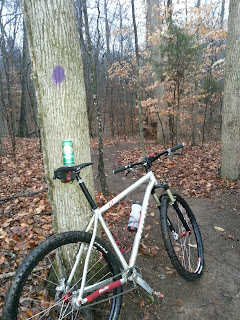 But this trail wasn’t closed.  Why?  Well, because it’s the one we’ve been building for the last few months.  We’re making it an all-weather trail, and even if I did fuck something up I’m the one that has to fix it.

It was a little slick, so climbing was difficult on a single speed sometimes.  I made it up the steepest shit out there though, and I had a blast. 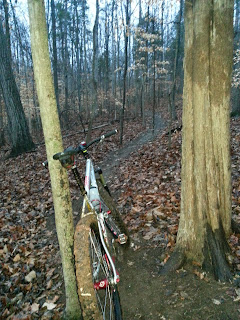 We have a little bit of distance out there now, and it is good enough to get in a decent ride.  I rode all the way to the end, and it made me excited that we are making progress. 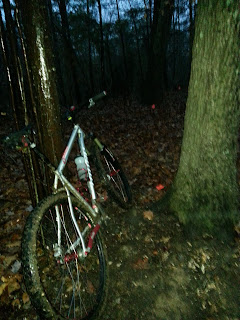 I ran into TomTom out there, and he was doing a little work.  It was raining and getting dark, but he was out there busting his ass so we can have a nice place to ride when everything else is closed.  I turned around and rode the trail back down (it’s all climbing right now), and I had more fun than you could shake a stick at.  Riding in the cold rain and mud was good for me, and it kept me from losing my freaking mind sitting in the house.

Speaking of mud, the shitty conditions gave me a chance to test how good this stuff is: 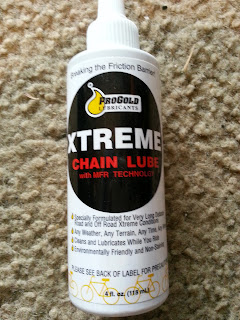 ProGold Extreme was perfect for the job, even if I was riding on only one gear.

I did spend quite a bit of my time away working on this new trail, and I’ll probably get into that in the near future.  For now though, I’m just glad we have something to ride without screwing it up for everyone else.  It was a great way to start off the New Year, you know, drinking beer while riding my bike.

I need to do shit like that more often instead of sitting around complaining about the weather.