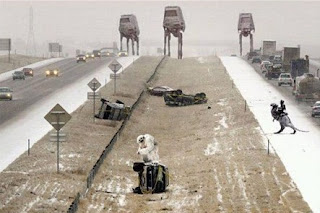 Well, sort of.  It’s been cold here for sure, but we haven’t had much in the way of winter weather.  They say that we may get something that resembles snow/ice/sleet this afternoon, but I’m not counting on it.  Weather people are not usually correct with the forecast, you know.  But, the DOT has been busy putting car-eating salt on the roads just in case.

What does that mean for the weekend?

I will carry on as usual.

Tomorrow, Lunchbox and I are rolling down bright and early to do some legit trail work at one of our local parks.  This new trail system hasn’t opened up yet, but that’s why we’re going there.  There’s lot of work to be done.  And that’s why I’m bringing my man-sized kid along.  He can lift heavy stuff and dig in the dirt without getting tired like us old folks.  It’s gonna be colder than a brass toilet seat on the shady side of an iceberg early in the morning, so I’m guessing that he would stay home in his warm bed if he hadn’t already commited to being there.

Hell, I would too.

Next up, race number three in the Winter Short Track Series.  It’s finally gonna feel a winter race because the temps will probably be somewhere in the low 20’s.  Luckily I don’t race until 11:30, so hopefully it will be at least 30 degrees.  We’ve been spoiled again this winter with nice weather, so I really shouldn’t complain.

But I will, because sometimes I have nothing else to do.

Luckily, my feet won't be cold.  I have the best socks in the world to keep them warm. 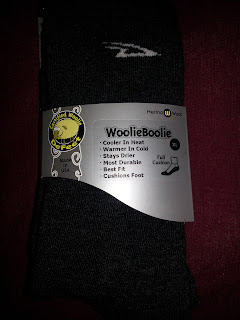 Yup, DeFeet Woolie Boolies.  Made right here in , to keep me warm on these chilly days.

They work in other places too, where it’s much colder.

And now you can stop complaining, because I’m out of here.