I rode last night, and it was fun.  However, today's post is about something else.

No, this isn’t about 80’s music, or even anything from the 80’s.  It’s about my man-sized child (from the 90’s by the way), Lunchbox, and his racing exploits.  Even though he’s not a serious racer child, it makes me proud to see him out there riding as hard as he can.

And, he’s a snazzy dresser. 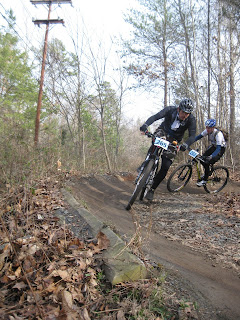 He took off somewhere in the middle of the group, and his first lap was pretty fast.  The course was still pretty slick during his race, but it didn’t bother him one bit.  He’s a mountain biker after all, and he’s got skills that these dirt roadies wish they could even come close to having.  Instead of training on the road working on his fitness, he spends time on his technical skills. 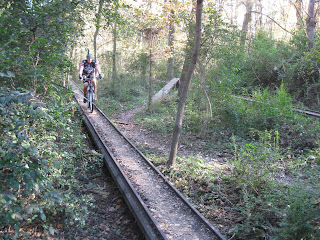 Poo tracks.  He has them.

Anyway, carrying around 225 pounds over the course of a thirty minute race was wearing him down.  He has tons of power on climbs, and he’s faster than bad chili through a hound dog on the downhills.  That’s not enough when racing against people half his size though, because the climbs hurt the worst.  So, he suffers worse than they do. 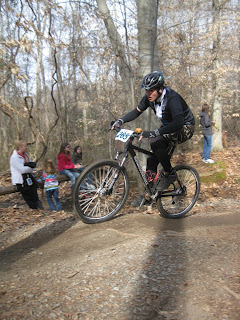 Taking a page out of my book, he gives it his all out there even though he’s not the fastest.  He doesn’t quit.  That makes me a proud papa. 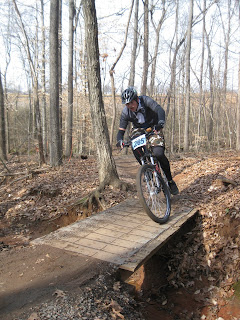 I don’t like to see him suffer though, and after several climbs up the fire road he was pooped. 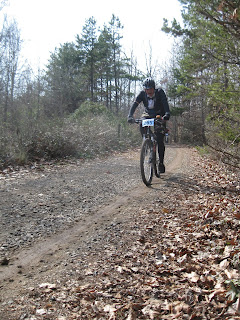 I had to run out of the woods to get ready for my single speed pain session, so I didn’t watch the rest of his race.  I saw him come across the finish line though, and he looked pretty good.  Even though I wasn’t out there cheering him on anymore, he had his own fan club out there to keep him going.

TomTom was out there in the woods still, and got him taking the tabletop jump. 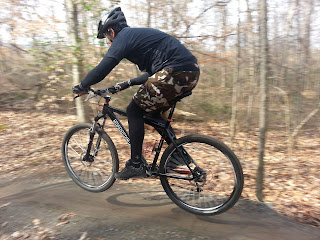 He had a great time.  It’s not about winning or having the fastest lap times.  It’s about fun, especially for the kids that go out there and ride.  They will grown up one day, and if they continue to race let’s make sure they don’t turn into a bunch of Strava loving, can’t call out their passes, dirt roadie douchebags.