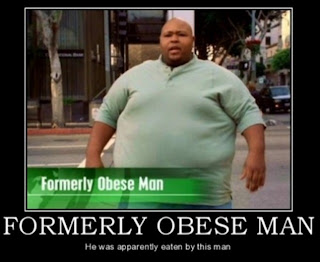 I work in a hospital.  While I don’t do anything clinical (I’m a tech guy), I still figure that the employees that help sick people get well should have to set some kind of example.  However, most of the workers in our health care facility (just like the rest of the population) are out of shape to say the least.  All day long I see people shoving down fistfuls of snacks in between taking care of patients, all while they complain about needing to lose weight.  They take the elevator to go one floor (down even), bitch about walking across a parking lot to their cars, and gossip all day about all the TV shows they watch every evening.  It’s really sad.  It’s not just here though for sure, because I see this all over the place.

If you wanna get back in shape, lose your holiday weight, or whatever the hell else you want to call it, just follow this simple plan:

That’s right, it’s that easy.  Quit bitching about how tired you are, or how you’re not as skinny as you used to be.  Go take a walk, ride a bike, or use the stairs whenever you can.  Stop sitting on your fat ass all day putting down calories that your body can’t burn off.  Your body isn’t meant to sit around all day.  Get out and do something.  Use those muscles for more than changing channels and walking to the fridge to get more snacks.

Which brings me to the next step…

You like to eat, I get it.  However, you’re not a teenager anymore.  My sixteen year old can eat whatever he wants, but you can’t.  He’s pretty active by the way, so it’s not just because he’s a kid.  I learned that as I started getting older, a second or third helping isn’t required.  When I got joined the Army in 1990, I was 6’1 and 146 pounds, skinny as a rail no matter how much I ate.  They made me eat more, and with the traiing we did I bulked up to 200 pounds a year later (I also grew three more inches taller during that time.)  I eventually leveled off at 225, and I’ve been there ever since (aside from the occasional “offseason” fluctuations due to inactivity.)  The point is, you can’t eat like a starving teenager anymore.  Your metabolism has slowed down, and you eat like shit nowadays too.  If you’re gonna eat more than you think you should, then go back to number one up there and mutiply that by how many cheeseburgers (or beers) you consumed.

If you’re happy being a Lardassian, good for you.  I’m not talking about you at all then.  If you’re on the large and in charge side and you’re currently working to get your weight in check, that's really awesome.  I’m not talking about you either.  If it seems like the weight isn’t coming off as fast as you want it to, just be patient and don’t give up.  Most of the people that complain about needing to lose a “few pounds” don’t seem to be doing anything about it all though.  That’s a damn shame.  Quit bitching about it and go take care of yourself.  You don’t have some sort of genetic defect or abnormally slow metabolism.  You’re just lazy and you eat too much.  Get off your ass and put the fork down.

I’m going to ride my bike so I can drink beer.

Read this one, it was our article of the day here at work, a complex solution to a simple problem

I so agree with you. Take it from one to takes the stairs, always park far away for the walk (and protect my truck) -ask Heather :-)and try to ride when I can. Great blog!! You write so well...