Two races in one day:  one with gears and one without.

My second Winter Short Track race was in the single speed class, and after getting my ass handed to me earlier in the day I had to go back for more.  Since I had a little energy left, I figured I should grab the Falcon (my SS bike in case you forgot) and ride with the super fast single guys.  I kept telling people all day about my plan, and no one tried to talk me out of it.  They all said I was crazy, but I think deep down they all wanted to watch me suffer.  I could’ve backed out, but I didn’t.

I make dumb decisions sometimes, like trying to catch air when everyone is waiting for racers to crash. 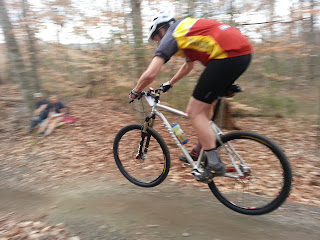 When I lined up at the start, I was up front.  I saw my boy Marcus under the tent, and when I yelled at him he ran over and tried to make out with me.  It was all in good fun, I think.  Or maybe it was because he had crashed earlier in the day.

Since I was all creeped out, I wasn’t really nervous about lining up against a stacked field of experienced single speeders.  We took off, and I pedaled my ass off to get in the woods somewhere in the middle.  There are dirt roadies in the SS class too, so I knew I would be riding all up on people that were squeezing the shit outta their brakes. 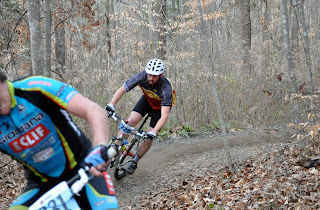 Photo cred (from here on out unless otherwise noted): Eastwood

I hung in there in the woods, and when we hit the fire road I stood up to mash.  A couple of faster guys went by, but I was going all out and stayed with them.  I knew I didn’t have much energy, so the plan was to leave whatever I had out on the trail.  Lap two was a little more of the same, but I managed to get into a group that didn’t use the brakes as much (but it was still too much.) 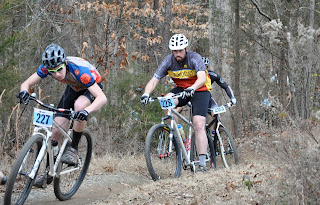 My legs were starting to hurt a little, but it wasn’t too bad to fight through.  The climb up to the rock garden wasn’t easy (after racing earlier), but I was at least having fun. 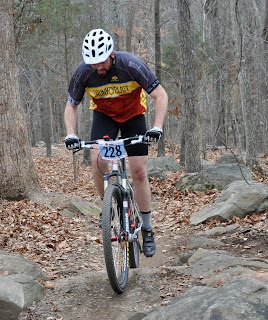 After crossing the start/finish line the second time, I couldn’t keep track of what I was doing.  I do remember cheers from random spots along the trail, including a group of hecklers at the Dicky Jump (named that because he built it I guess.)  The Evil Ginger, Dicky (of course), and a bunch of other folks were yelling every time I hit the jump, and it was all I could do to keep from crashing.  I guess they didn’t cheer loud enough.

When I got to the rock garden again, the crowd was even bigger.  They were chugging beers, and cheered even louder when they saw my Drunk Cyclist jersey. 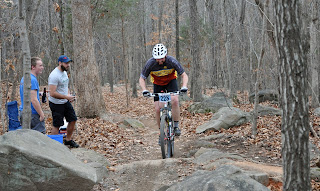 That was sofa king rad, and it kept me going.

Every time I finished the fire road climb and rounded the corner for the start finish line, Good Guy Greg and TomTom were there yelling too.  By the looks on their faces, they knew I was crazy for getting out there a second time.  I just laughed (to hide my suffering.)  The climb out was killing me at that point (about thirty minutes in), but I wasn’t about to quit.  I was having way too much fun in the woods. 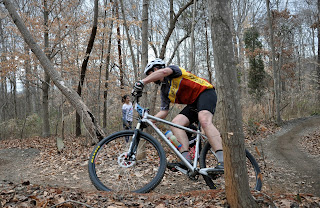 When the announcer yelled “Two to go!” all I could think was, “Shit.”  I was hurting, and I didn’t know if I had two left in me.  That lap was a blur until I crossed the start/finish line again, when I finally heard, “One to go!”  I sped up a little, but I felt like I was slowing down.  I looked behind me and some fucking dirt roadie was trying to draft off of me.  I swerved to the right and said, “Hell no you don’t”, and he backed off.  I gunned it into the woods one last time.

The final climb wasn’t so bad, even though it still hurt.  I knew the race was almost over, and part two of my “Race your way into shape” training plan was complete.  I didn’t feel like I wanted to pass out at the end, although if I had stopped right away I surely would have.  It was a helluva lot of fun though.

I never did find anyone to give me a beer hand up during that race though. 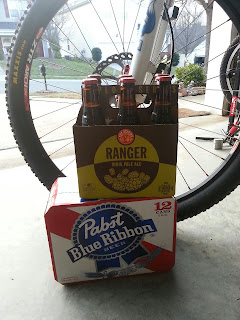 I ended up sharing a little and drinking the rest after the race.

Maybe next week someone will toss me a beer, if I can find someone I can trust not to drink it all.