Without any input whatsoever, I made a decision on my own.  Tomorrow morning, I’ll be lining up on the start line in Old Fort, NC for the Jerdon Mountain Challenge.  Sure, it’s not as big of a deal to some of you as ORAMM, but for me it is.  It will probably be the biggest race I’ve done so far on a single speed, and that pleases me.  I’ve been in kind of a funk lately, so a little time spent in the mountains suffering would probably do me some good.  Besides, it will be a good tune up for Single Speed .

Now the only question is, which gear do I run?  Well, I have lots of choices.. 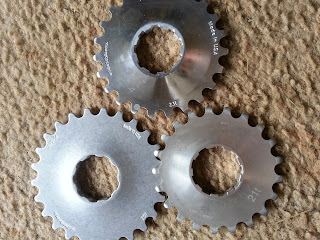 Do I run the super hill-friendly, pie plate-looking 25 tooth cog, the slightly harder, yet no less ridiculous-looking 23, or do I man up and run the 21?  The 21 might be the best choice for the road sections, because if I was running one of those bigger gears I might as well get off my bike and run.  I’m not crazy about spinning my ass off on the road between the end of Kitsuma and the start of Star Gap, so I’m leaning towards the 21.  I’ll make that decision tonight though.

Nothing says race-ready like working on your bike the night before an event, right?

If I survive, I will have completed over thirty miles with about four thousand feet of climbing.  It’s a pretty big deal for someone of my size I guess, and being on the single speed makes it even tougher.  Sure, I could put the gears back on and race in the Rhino class (200lbs +), but that would just be stupid.  Riding with gears in the big boy class might take the edge off the suffering a bit, but not enough for me to wuss out and do it.

I gots this little thing called pride, you know.  Plus, there’s no turning back from the Dark Side now.

If I don’t die or end up in the hospital for an extended period of time, I’ll be back here Monday with some kind of report.  Maybe it will be just a report of how many beers I consumed in the creek after the race, but at least you’ll have something to read.

It’s not like you’re out doing anything exciting this weekend, so keep your ass on the couch and drink a few for me.