I found plenty of things to get into over the weekend, and I think it might be too much to talk about in one day.  So, I guess I can work backwards from yesterday.  It’s back to shitty weather around here again, and every local trail was closed.  I couldn’t go all the way to the mountains (I’m on call for work), and going another day without riding would have certainly make me go ape shit.

So I grabbed Darth Maul and we hit the road. 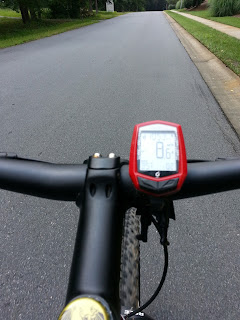 I’m only about a mile and a half from a local greenway, and since I wasn’t on a road bike that was my destination.  After doing a little urban action, I rode down a few paved hills and ended up near my local creek. 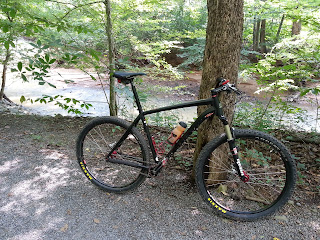 I was right around the corner from our private trail (RTS), so of course I had to hit that.  I headed that way, and I was surprised at how many people were out there riding (the greenway, I hadn’t made it to the trail yet.)  As I rolled down the last hill before the trail entrance, some fruity looking runner called out to me:

“Be careful, there’s a ssssssssnake!”

The only thing I could think to say back to him was, “I’m gonna pick it up!”

Turns out he needed me to pick him up.  He was partially on the pavement, and in severe danger of having someone come around the blind corner too fast and squish him.  I gently picked him up and helped him into a nearby tree. 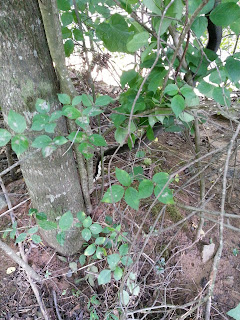 And he was so happy that he kept going to the top. 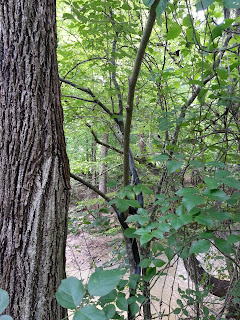 Now he can jump out of the tress and scare the shit outta that runner that was so worried about him.

Anyway, it was time to hit the trail.  Our little slice of heaven in the woods was bone dry despite all the rain we’ve had, and I enjoyed the hell out of it.

After a tough ride (that shit has a bunch of climbing), I hurried back home to get ready for a party.  That’s right, yesterday afternoon was the Grand Opening Extravaganza for Good Runnings, ’s soon to be famous bicycle delivery service.

It was your typical party in the park. 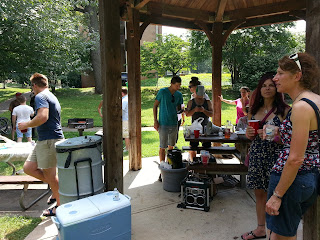 With your typical shenanigans: 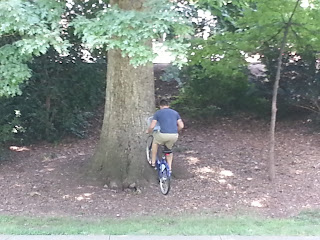 But you know a party ain’t a party until Dicky shows up with a beer in his bib shorts. 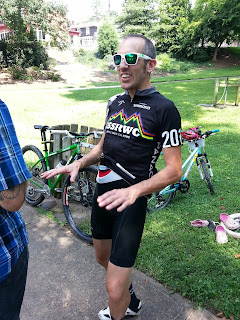 And then there was the slip n slide: 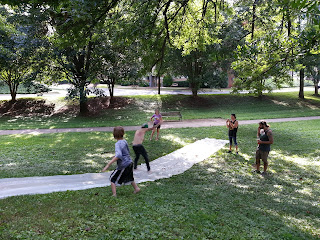 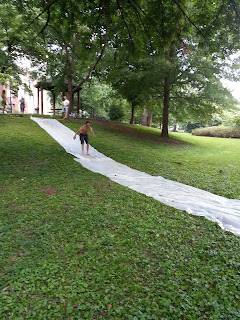 Actually, it was a really fun time.  Beer, food, bikes, and fun people for sure.  It was a good way to spend a Sunday afternoon and I was glad to have something fun like that to do.  For once though, I didn’t close down the party.  I had to leave to go sell the last of my geared, squishy bikes, but I didn’t walk away from there empty-handed.

I got a cool cycling cap: 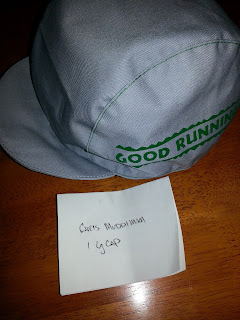 I’m not the cycling cap type at all (I prefer hats), but maybe I’ll try it on and see how I look.  Of course I’ll share that with you.

Well, only the almost good stuff anyway.
Posted by TheMutt at 8:38 AM