Thanks to your input, I made the decision to get myself a crabon frok for my newest single speed.  As it turns out, making that difficult decision was the easy part.  When I called my local shop to get one, he tried his best but came up short.  He did offer one in white though, to which I politely said hell no.  I was ready to buy, but I couldn’t find what I needed.

That’s how lucky I am sometimes.

After searching high and low and calling in a few favors to some people that shall remain nameless, I was still coming up short.  Eventually I found one, and it was on its way to the B-43 Worldwide Headquarters.  I’m still deathly afraid of carbon bicycle parts though, so I wanted someone to help me with the install that had some experience.  I called upon Dicky, who offered his assistance when it arrived.

Plans were made which involved a few people giving me assistance.  The frok was set to arrive sometime yesterday, so Lunchbox was waiting at the house to keep an eye out for it.  When it showed up in the afternoon, he brought the box in the house and notified me that it had arrived.  The next phase of the plan was to get it to me here in the city.  Little Miss Sunshine got off work early, and with a planned ride back this way she offered to deliver it to me after work.  While she was on the way, Dicky let me know that he was backing out to go shopping for a new skirt.

No worries, since I had a backup plan.  I called Good Guy Greg, who, just like his name might suggest, is a good guy and always willing to help (and he has a carbon frok too.)  The only thing he really needed was a way to install my new crown race on my new frok. 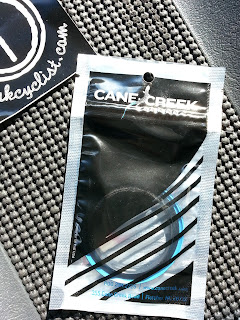 I told him I would head to the local home improvement store and see if I could find something that would work.  I managed to piece together some PVC parts that would do the trick, and I started to head his way.  That’s when I looked in my rear view mirror and realized that I’m a dumbass.

I had forgotten to bring my bike with me.

Since I knew that would be my only free night this week, I made the decision to rush back home, grab my new SS, and head back to the city.  I lost some valuable beer drinking time in the process, but at least I knew I would be riding a rigid bike again soon.  When I got to his house he was waiting, and I unboxed my new frok so we could behold its awesomeness. 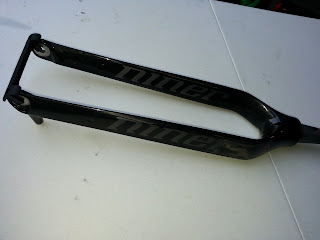 And now it was time to get that squishy shit the hell off my bike. 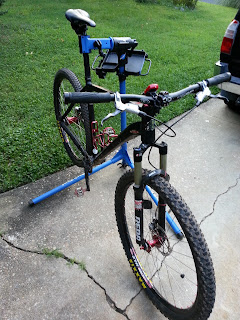 Beers were poured, things were measured, and things were cut (only once, too.)  Once the new frok was installed, I was giddy like a little school girl.  My bike was super light now (yes, I’m a weight wiener I guess), and it was dead sexy. 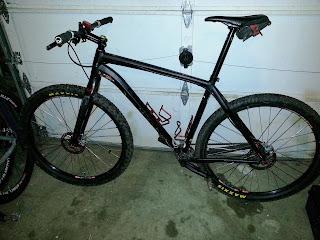 On the very first try, I got the spacer height exactly how I wanted it.  No other adjustments  were needed, aside from the brake calipers.  With all the shit I went through to get the fork here and installed, it was nice to have the rest of it go so smoothly.

And now I get to test it.  Tonight’s ride is on one of the rootiest trails around, so my return to rigid will be a trial by fire.

What, no gif of the stem cutting. Shame on you. At least you guys did it right - with beer!