So I couldn’t resist.  I went back out to RTS to work yesterday, even though my goal for the day was to ride somewhere (or even there.)  I texted TomTom to see if he planned to go out there, and he replied by saying he was at the beach.  He’s a travelling man these days.

Since I was already out of the house, I stopped by the trail to get in a little work.  I only had an hour or so, so I made the most of it.  First, I had to find the flags. 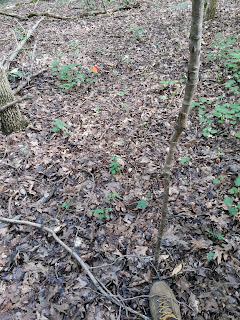 Then I started roughing out some more trail. 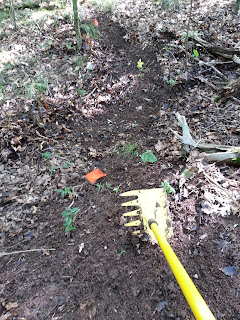 I started high up on the hill, working my way back to where we left off the day before.  Roughing out trail is pretty quick work, and you can tell the difference between it and finished trail. 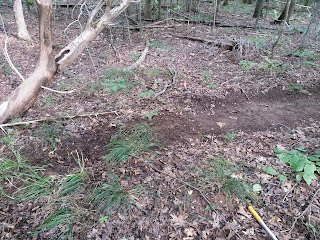 After about forty five minutes of digging in the dirt, I started thinking about getting out of there.  Just then, I heard a noise.  I looked up and saw this: 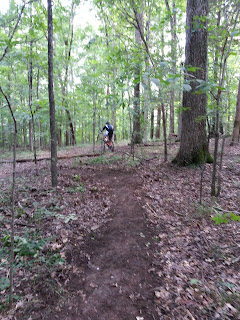 He was heading downhill, so I waited for a bit while he made the long, grinding climb back up to where I was working.  He stopped and talked to me for a bit, and I finally got some feedback from someone riding the trail that wasn’t out there working on it.  He said it was really tough, but fun as hell.  He decided to ride there after finding out that everything else local was closed.  He’d been there about a month before, and noticed that we’d put in a lot of work since then.  I thanked him for the feedback, and he thanked me for helping build a fun trail that can be ridden anytime.

I was glad to hear that.

There’s still more to do, but I can see the light at the end of the tunnel now.

We’re doing a group ride there tonight, and there will be some people in attendance that haven’t ridden it before.  Hopefully they will like it too.  Maybe I can sucker them into doing a little work when we're done.