I didn’t think I would survive the Jerdon Mountain Challenge.  That might sound kinda stupid, but for some reason I was really nervous.  I haven’t been nervous before a race in a long, long time, but right after I registered at the 11th hour I started to have second thoughts.  Although I had just ridden the course a month ago, Saturday would be the first time I would attempt it on a single speed.  There was no way I would chicken out (or waste the money I spent on registration), but all day at work on Friday I started thinking the worst.

I know I was overreacting, but something just didn’t feel right.  I got home Friday night, made sure my bike was ready, and got some rest to prepare myself for a long day.  Lunchbox and I hit the road at the crack of dark, and during the two hour drive to Old Fort I calmed down a little.  Just before the race started I got my game face on. 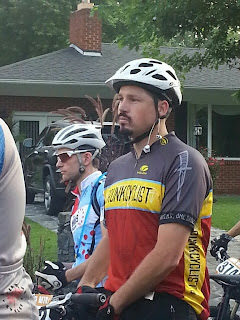 After the pre-race announcements, we rolled out through town. 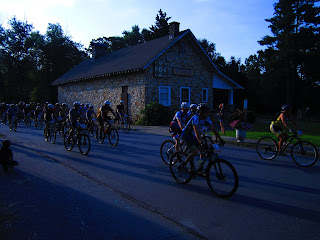 I started out kinda up front, but that changed quickly.  Running a 32x21 had me spinning like crazy, and I couldn’t keep up with the geared people.  I resisted the urge to spin my ass off to keep up, and when we hit a couple of climbs on the road I passed a few people.  During the flat sections I got passed again, but I realized that maybe I might have a chance to keep up with such an easy gear as the race went on (and as the climbing increased.)  After a few miles the paved road ended, and we started climbing up 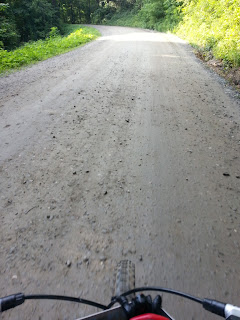 Photo cred:  Me.  I brought my phone along just in case.

During the long climb up the road, I noticed that the geared riders were spinning with the lowest of gears.  My gear ratio was perfect for that climb, and I started passing people left and right.   Every time I went by someone I heard, “You’re crazy for riding a single speed.”  I just smiled, said thanks, and kept on pushing.  My legs felt pretty damn awesome, so when I finally reached the top I decided to blow by the first rest stop.  Next up was Kitsuma, which after a series of switchback climbs turns into some of the raddest downhill out there.

I was ready, or so I thought.

On the first downhill I grabbed a little brake to scrub some speed and I noticed that I had nothing for a rear brake.  Zero.  Zilch.  What was supposed to be a fun section turned into “Oh shit, I hope I don’t die.”  I got my ass way off the back of my seat, and somehow managed to control my speed and not die (or worse) using only my front brake.  I also noticed that my rear tire pressure was really low for some reason, but I had just enough air to make me pucker up a little around the corners.  Towards the bottom of the trail I ran into a little traffic, and my first thought was to stop as soon as I could and shoot a little CO2 into my tire.

I guess I forgot, because as soon as I got out I gunned it.  Back on , I realized once again the disadvantage of my gear choice.  Spinning at only eleven miles per hour, I took my hands off the bars, grabbed my phone, and texted Lunchbox to let him know that I was approaching the halfway point.  As soon as I sent it, I rolled up to the geyser and saw a crowd of people cheering and taking photos. 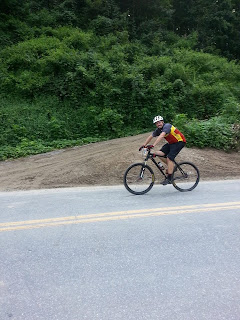 Lunchbox had hitched a ride there, while Little Miss Sunshine waited for her friend to roll through so they could ride Star Gap together.  I probably should’ve stopped to borrow an air pump (which I found out later they did indeed have), but I was making good time and didn’t want to ruin it.  Instead of turning up to climb again, we went straight through to aid station number two.

I had to stop this time, since both of my bottles were empty.  It was a quick stop though, since one of the very helpful volunteers filled them both for me.  Thirty seconds later I was back on the bike, headed for Star Gap.

The easy part was over.