Our convoy arrived at DuPont ready to have a fun day.  We started out climbing up some fire roads, and when we got to the first intersection we noticed some signs that looked like they were marking a race course.  Just then, a few runners came by.  We cheered and heckled them, then took off towards the Hilltop trail.  As we hit the singletrack, the runners started coming by more frequently.  We pulled over and let each one go by, but it was starting to get a little annoying (especially on the fast downhill stuff.) eventually we hit the end of that trail and got away from the runners by checking out some waterfall action. 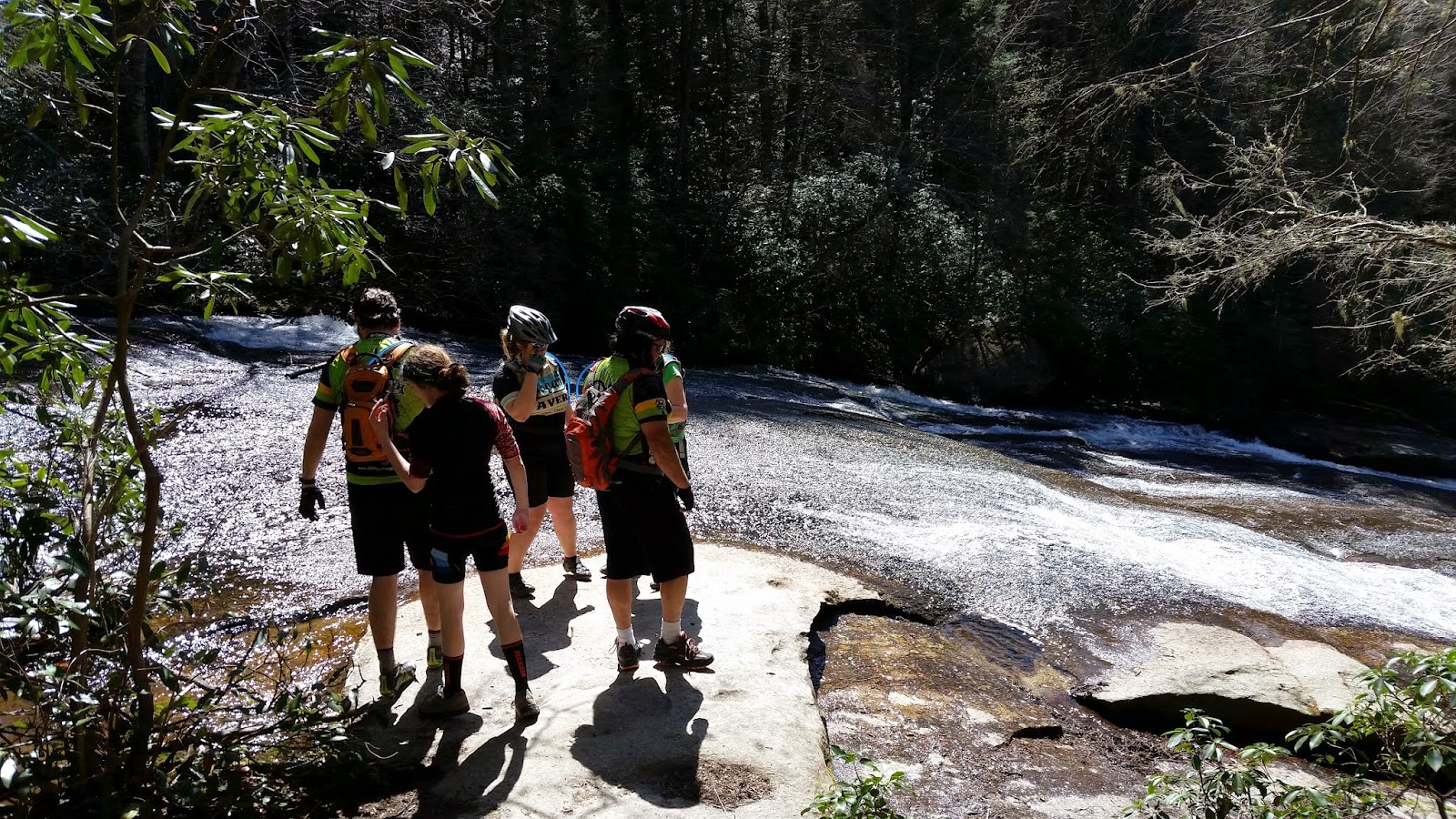 After that, more fire road climbing.  We didn’t really see anymore runners, but the roads were busy with other cyclists and some hikers.    Taking a slight detour off our route, we stopped at a covered bridge to check out the top of High Falls. 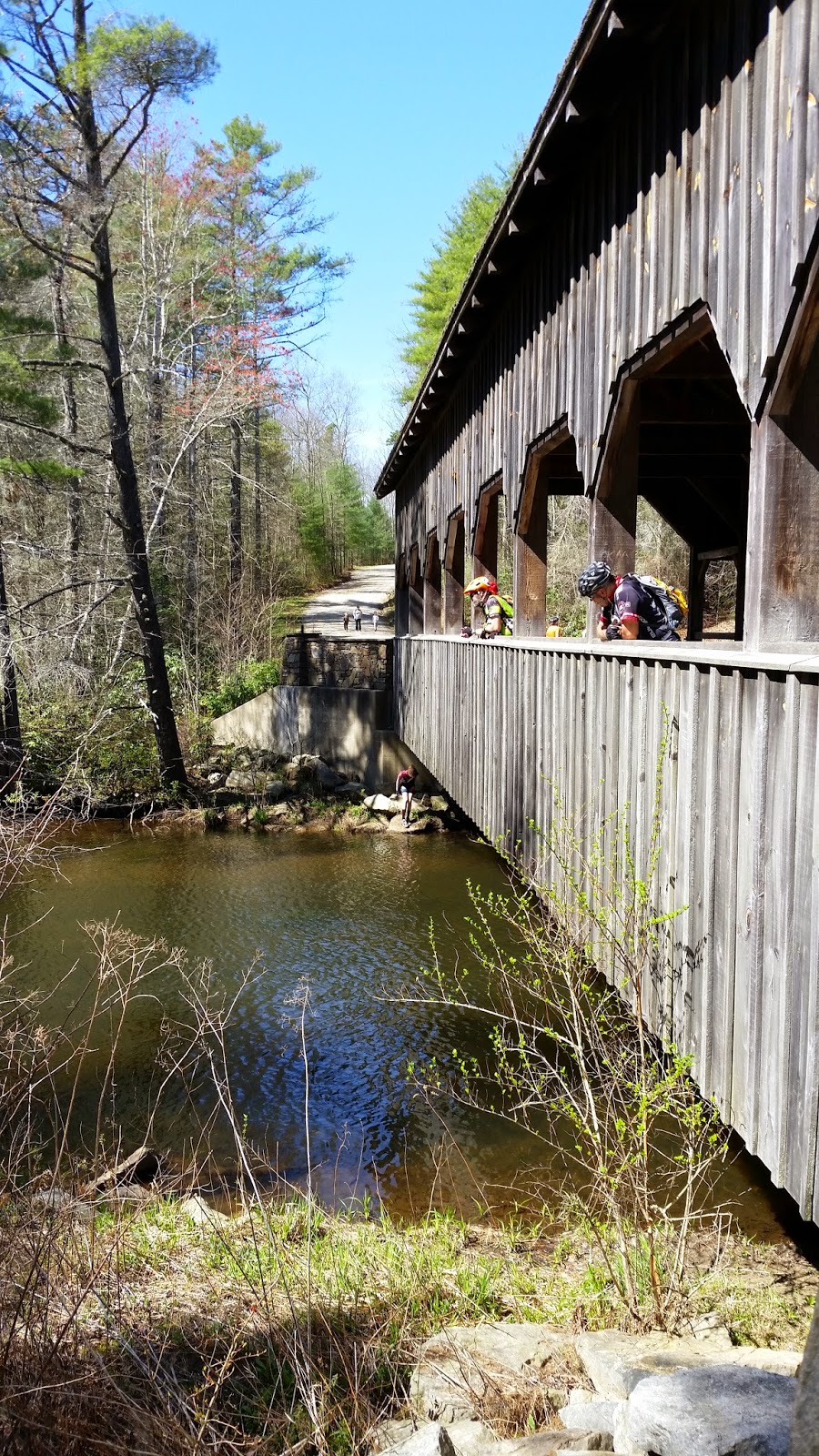 We had some first timers in our group, and the route I took them on was a nice intro.  Before we left the covered bridge, I warned everyone that the climb would get a little shitty.  It did, but at least it was on a fire road still.  Once we made the final grunt to the top, we got to ride on the airstrip and were rewarded with one of the nicest views out there. 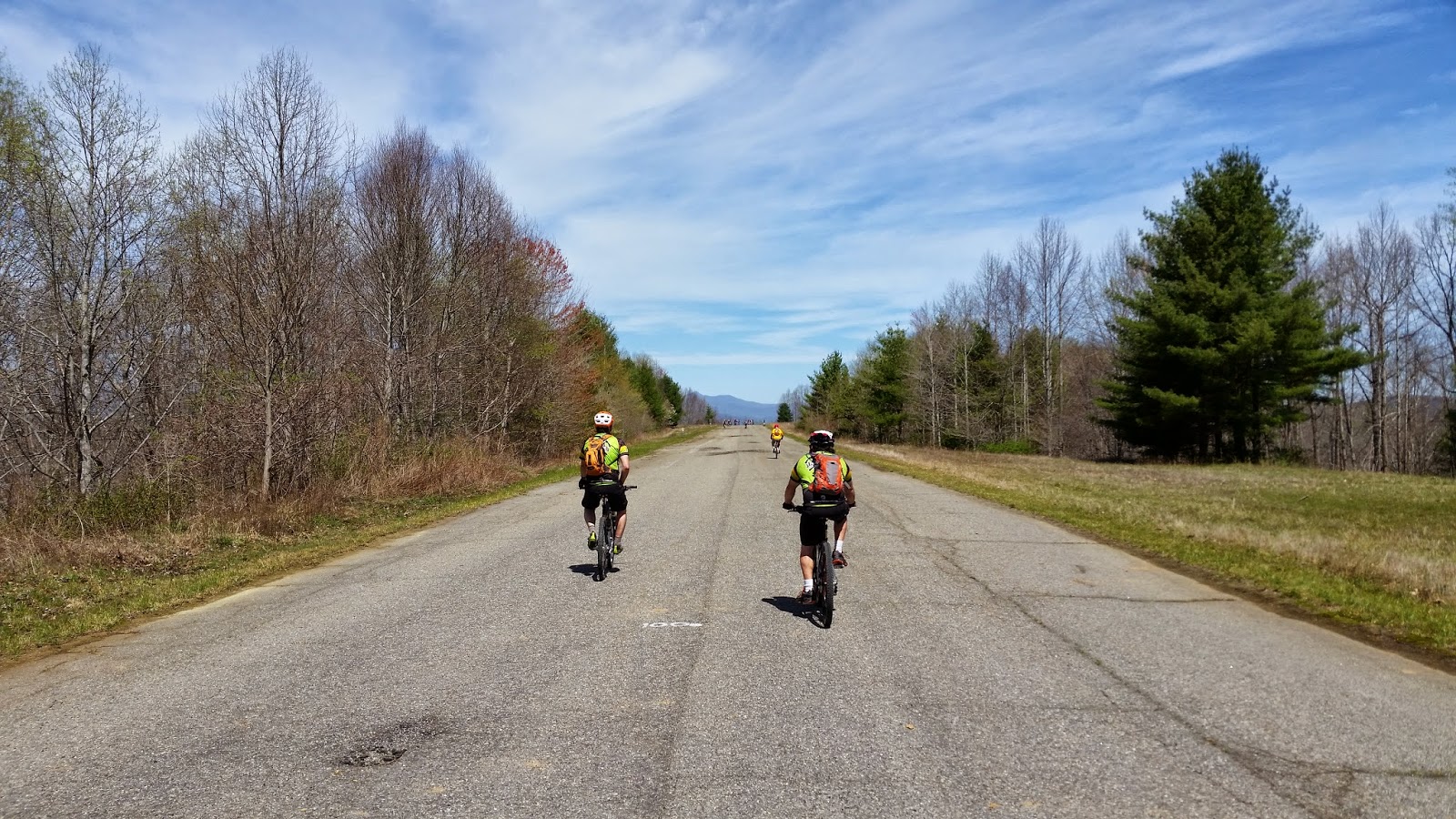 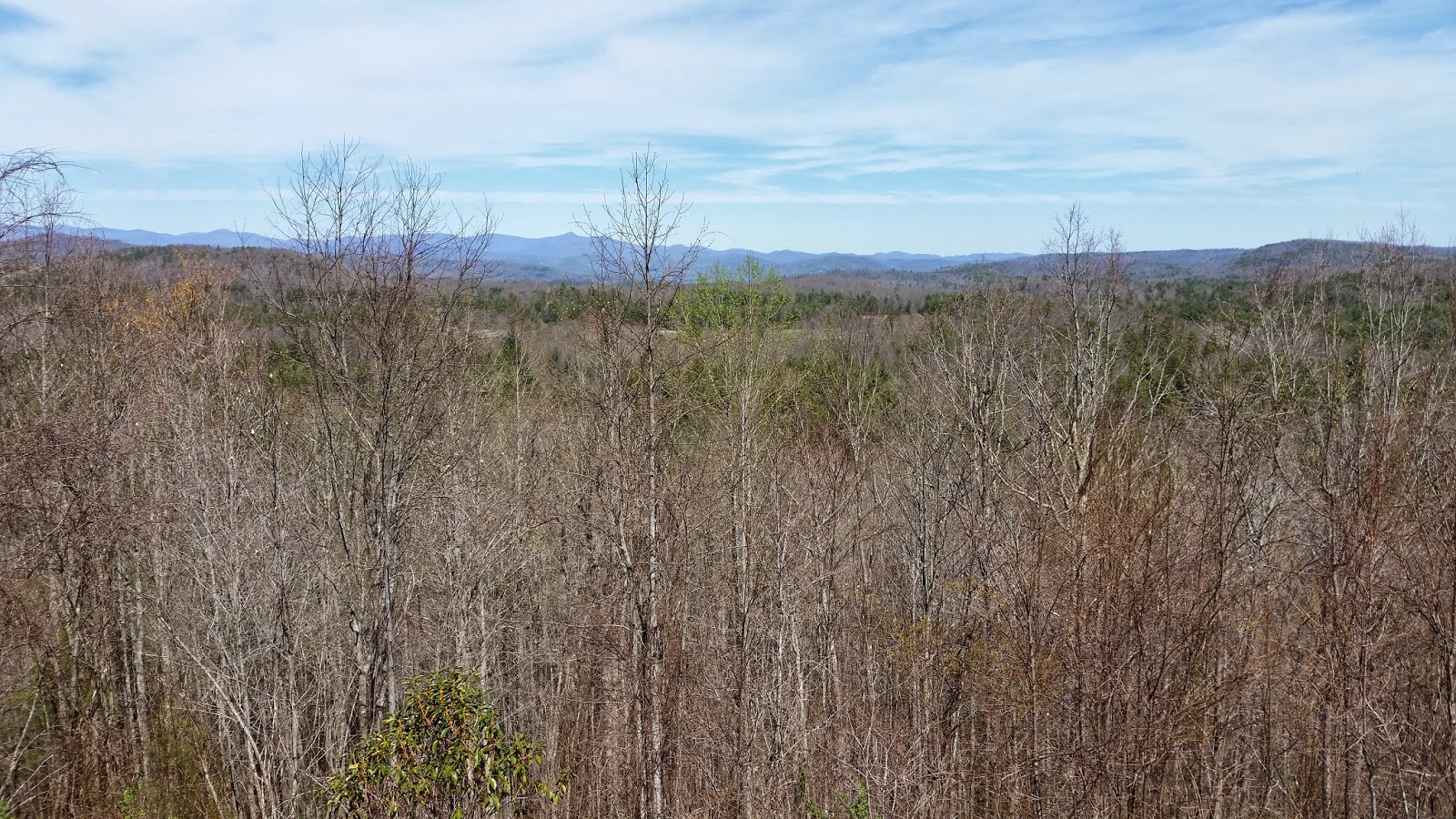 After hanging out for photos and conversation, we descended the Airstrip trail in a hurry.  The group loved the fast downhill, and everyone was all smiles. 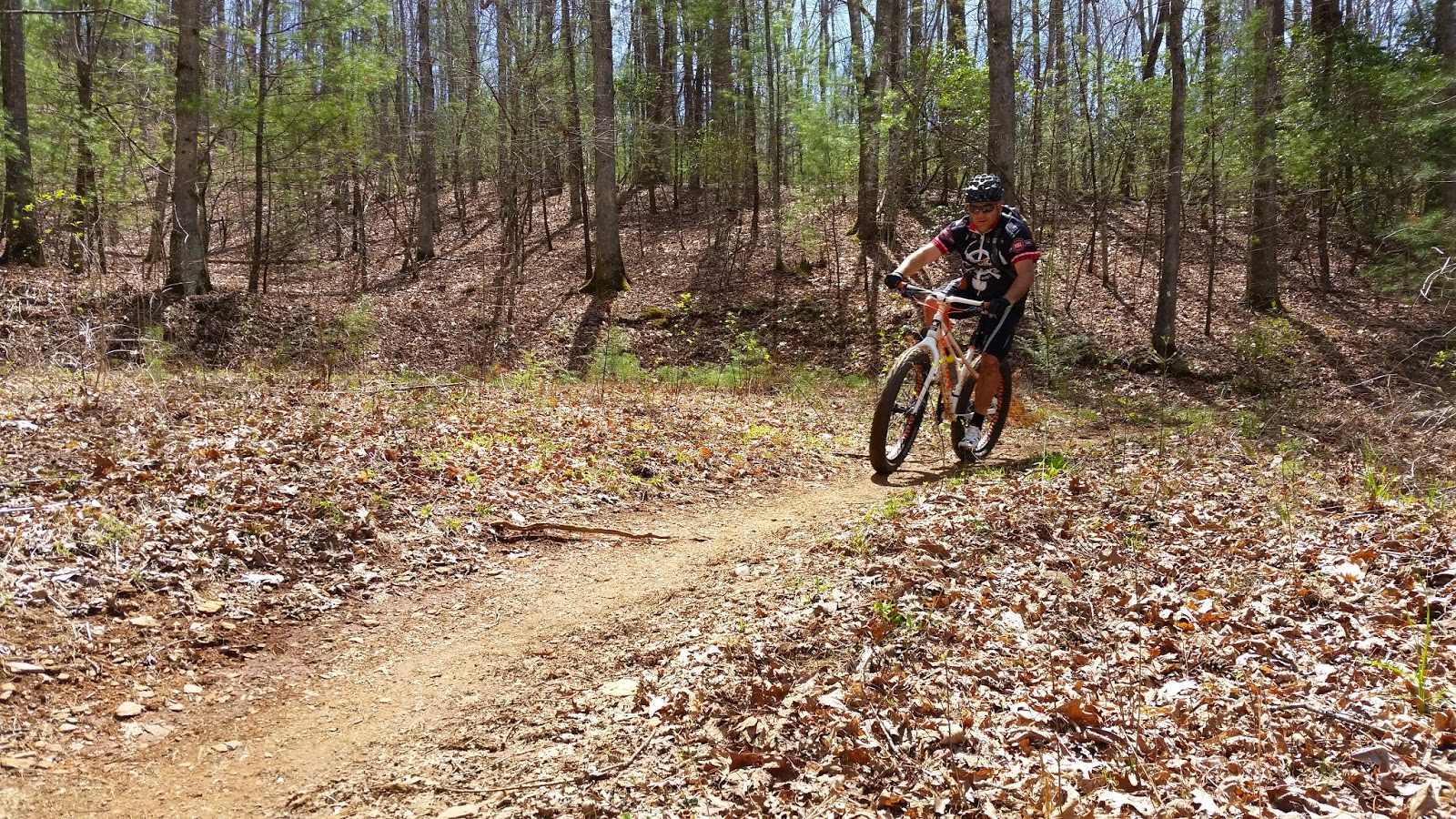 I decided to change the route up a bit at this point, and since we were close we decided to hit Bridal Veil Falls.

I’m glad we did, since it’s one of the neatest things to see out there. 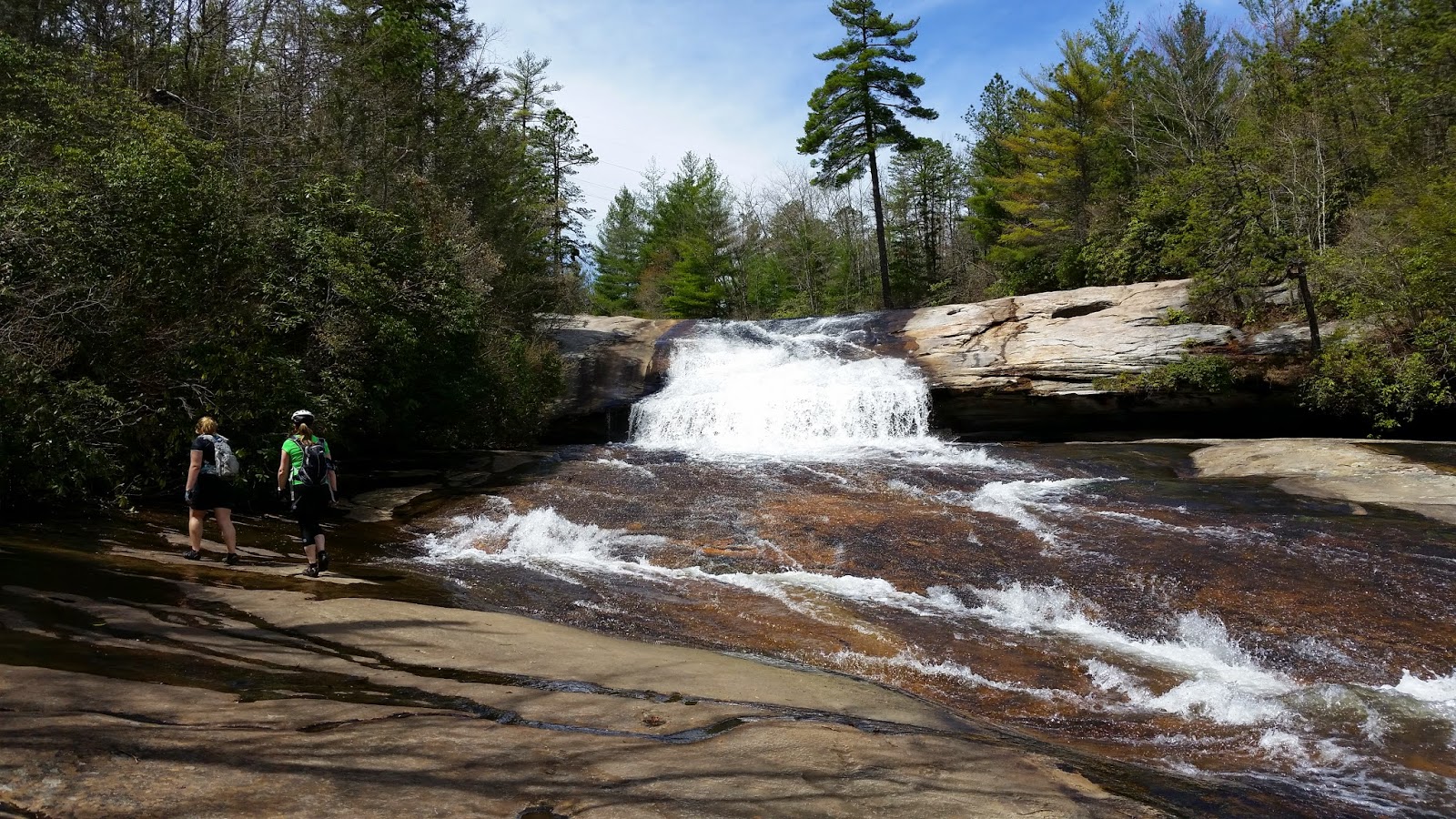 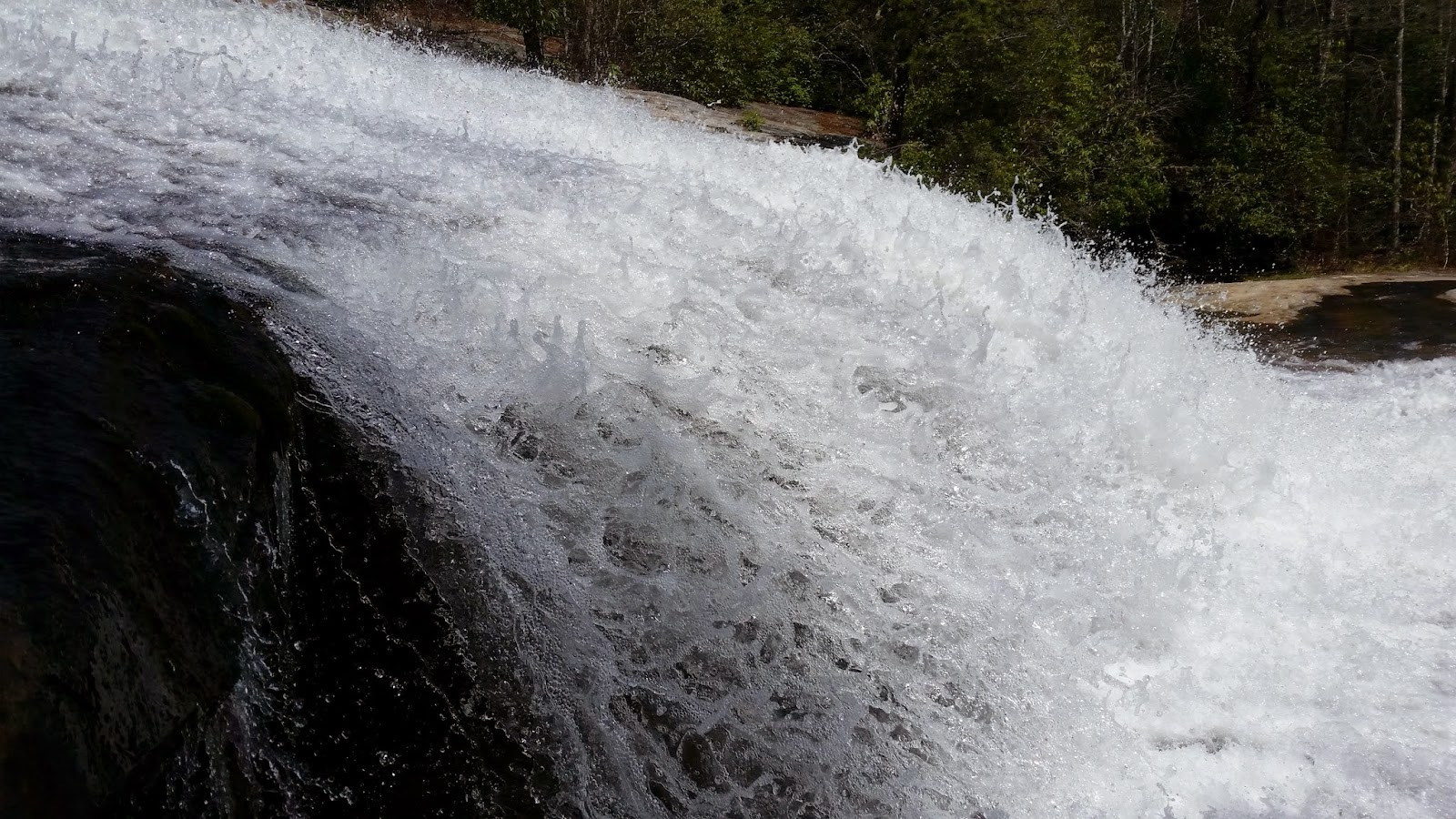 And since there were no longer any signs stating otherwise, we went behind the falls. 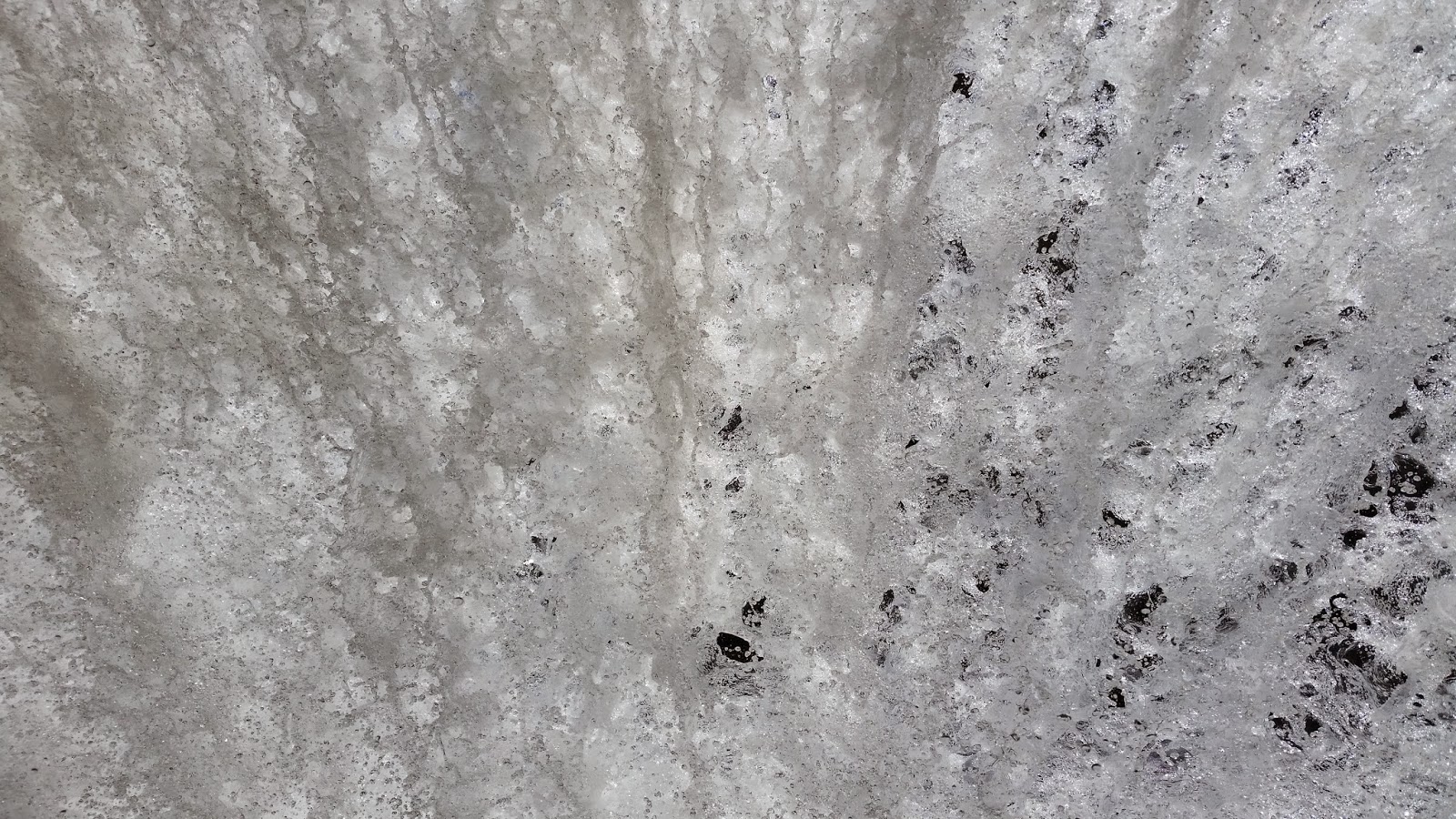 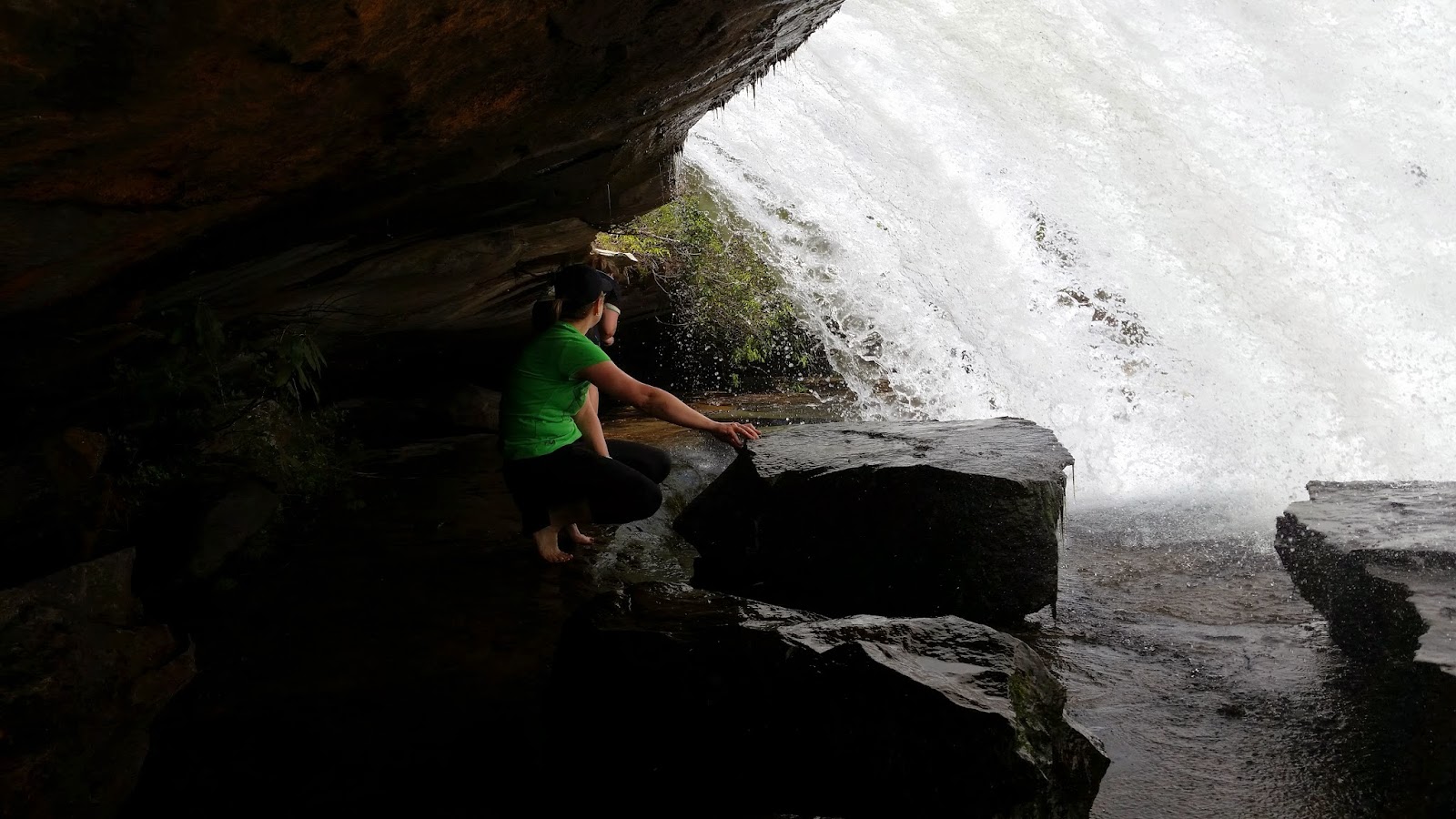 The rocks were slippery, but I learned a long time ago that if I take my shoes off, my DeFeet socks give me way more traction. 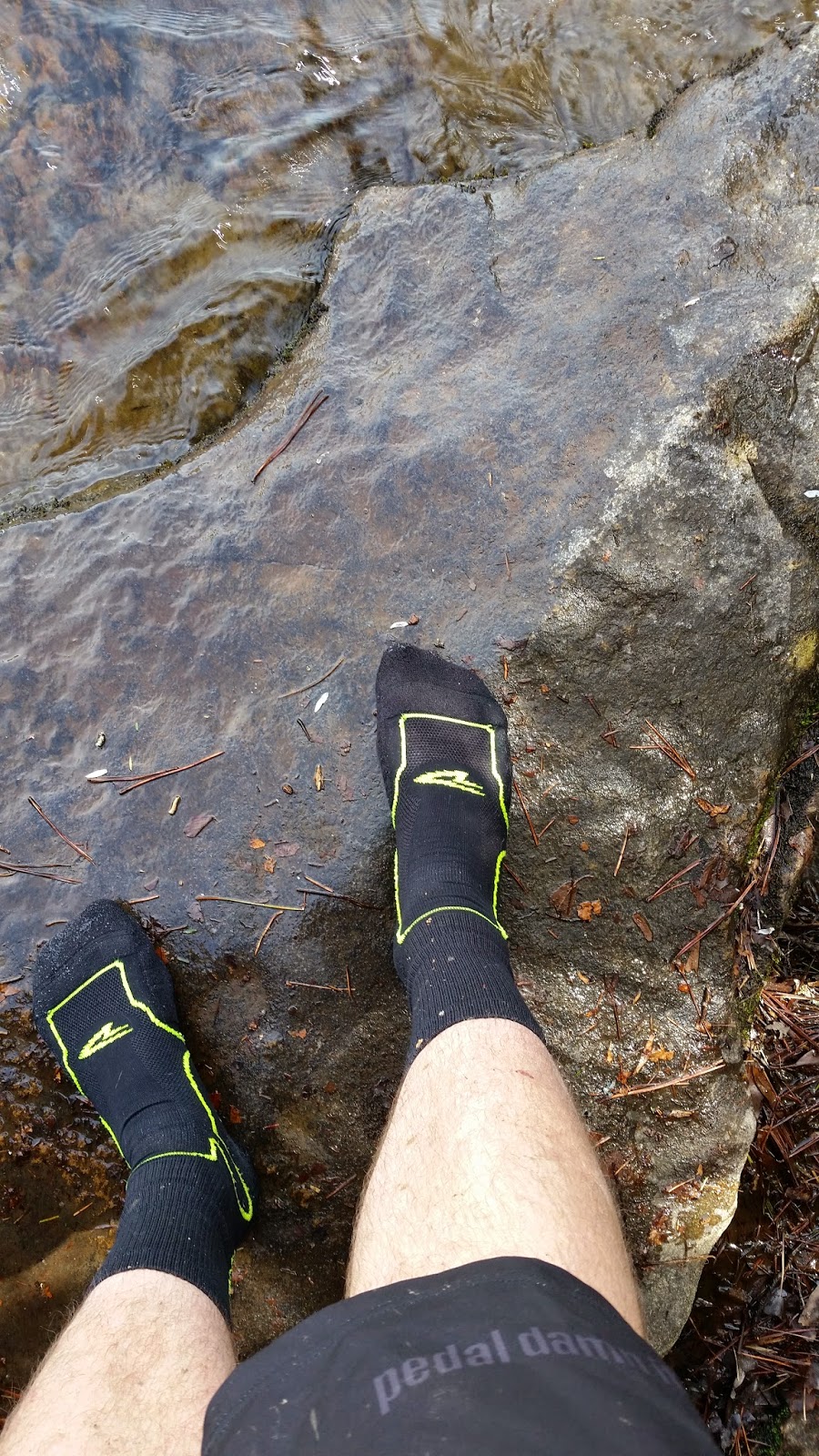 We were far across the forest, and the next part of our route would take a while.  After finishing up at the falls we had to climb up a gravel path to get to the main road.  It was at that point my stomach started feeling the effects of too many breakfast burritos with way too much hot sauce.  The group rode up while I pushed my bike (for fear of having an accident.)  On the way up I ran into the Dirty Party Cycle and The Z Crew, and while I did have a nice conversation with them I was hoping that I would make it to a bathroom.

Sorry if I seemed to be in a hurry.

Anyway, we rode lots of fireroad, and along the way I contemplated stopping in the woods to uh, alleviate my stomach issue.  I fought it off, but it kept getting worse.  Like a mirage in the desert though, the top of the last climb had an oasis of porta potties. 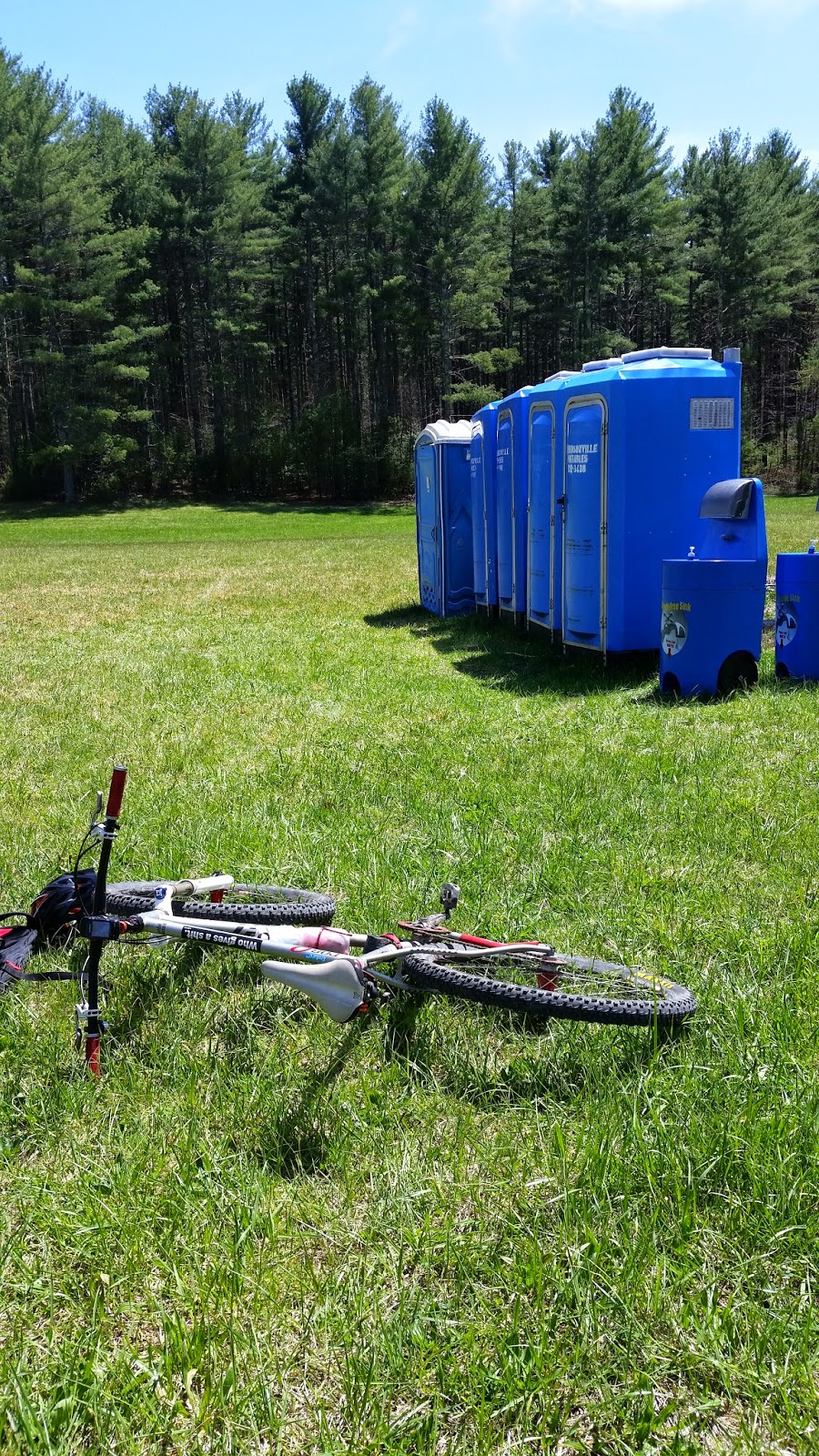 It was a photo finish.  That’s all I need to say.

Now that I felt better, we played around on the skills area nearby. It was fun as always… 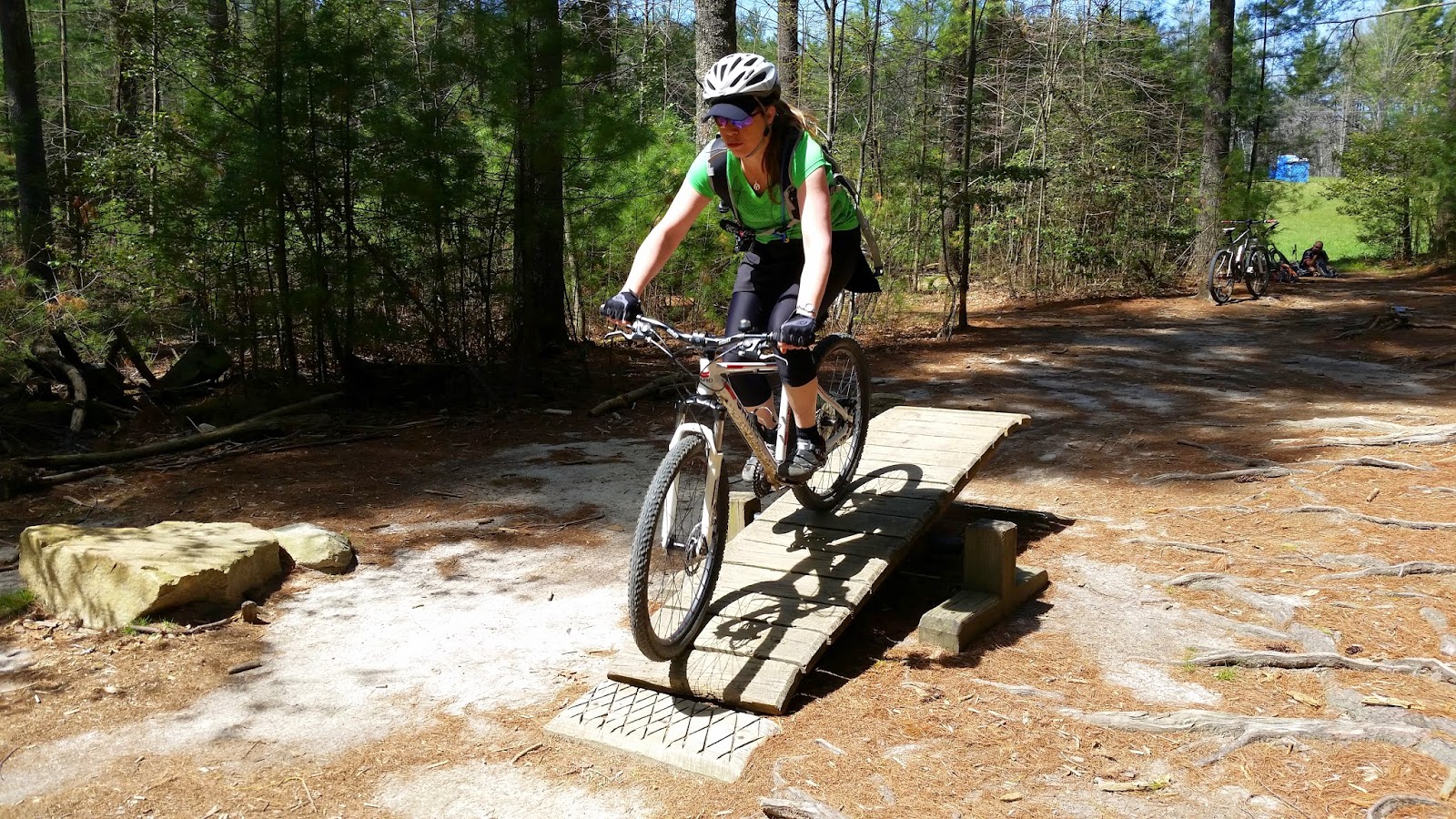 Some people were getting tired since we’d been out for so long, so I assured everyone that we had “one more climb” until some rad downhill.  We all made it, and the reward was a fast, fun descent down the Ridgeline trail.

We all took off one by one, with me somewhere in the middle after trying to wrangle the group.  The trail was in perfect condition, so I was letting it all hang out by going as fast as possible.  Coming around a corner, I spotted a bunch of horses (with riders) coming up the trail.  I had plenty of time to stop and pull over, and they were very kind as they rode by.  They told me there were eight of them, so after I counted them all I hopped back on the bike and let it go again.  I weaved around a blind corner after scrubbing a little speed, then let off the brakes again to hit the last half mile as fast as I could.

Out of nowhere, there were two more horses.  I grabbed both brakes as hard as I could.  I had my drooper post down and my weight all the way back, but my bike started tipping forward.  The first horse was jumping around like crazy, either from being scared to death of being hit or the fear of me kissing it on the mouth.

Yeah, I was that close.  Yuck.

I hopped off my bike and pulled to the side of the trail.  The horse riders said nothing until I asked if there were any more behind them.

They seemed pretty clueless about everything.  I wasn’t mad, but I wondered why they would pick that trail to ride up with horses.  You know, the one that always has mountain bikers flying out of it at high rates of speed.  I think our group did a great job of sharing the trails, but it was still pretty scary.  I guess I’m glad me or the horse didn’t get hurt.

It was still a really fun day.  A long day in the saddle riding some sweet singletrack, checking out some pretty waterfalls, and hanging out with cool peeps.  I enjoy it every time we go.

Our camping trip was once again a success.  We had some good rides, drank good beer at the best shop up in the hills, and ate like kings. 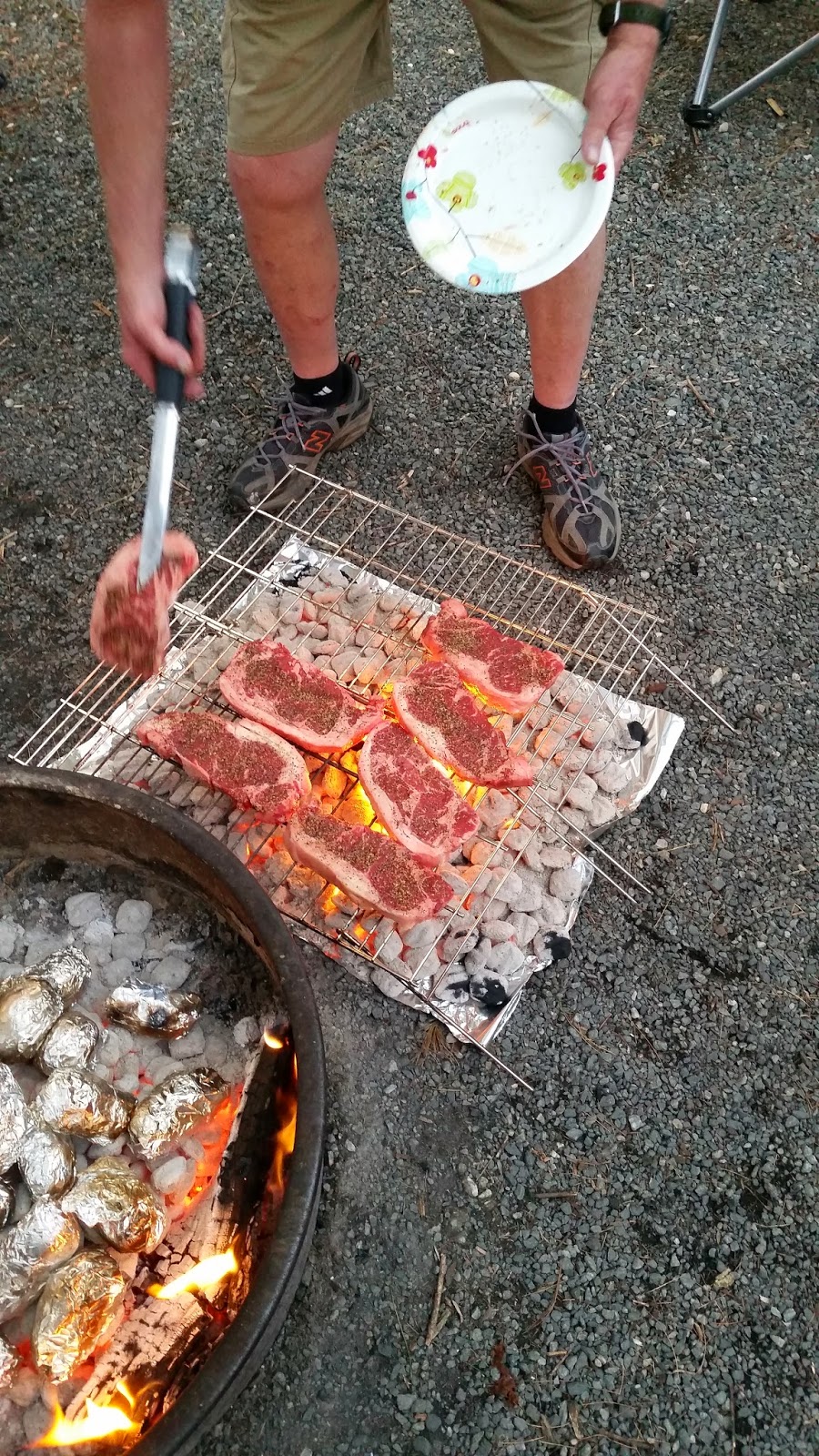 And adventures like these are why I love mountain biking.

Did not realize you were that close to the horse. Good thing you made the blue shelter before huh?
Thanks for leading this. It was a great trip.

nice seeing you out there, that steak looks delicious on the coals