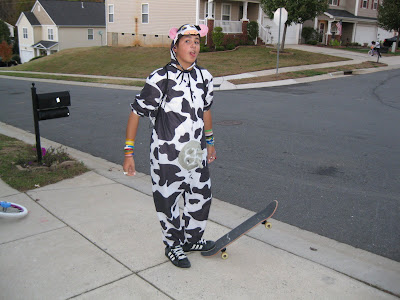 I’m still recovering from my injuries, and it’s been a little difficult (especially when your kid is skateboarding in a cow costume.) When I woke up on Saturday morning, I could hardly move. I was supposed to wake up on this chilly morning to go for a ride at the Kerr Scott Trail System, but I didn’t see that happening. I had spoken to the MadSS the night before, and I informed him of my injury. I was more pissed about the fact that I might miss the ride than anything else. I was looking forward to it, but it wasn’t looking good. I told him that I would let him know for sure in the morning.


When I woke up at 6:30 a.m., I decided that I would use my better judgement and bow out of this one, much to my dismay. My rib was killing me (not literally, but whatever), and it was difficult to get out of bed. I sent a text message to my singlespeeding pal and told him I wouldn’t be joining the crew for a romp in the mountains. Instead, I just stayed in the bed. That was difficult for me to do, especially with the mountains calling my name. I painfully propped myself up with a few pillows and turned on the television. For me to spend a Saturday morning watching TV was unheard of, but I really couldn’t do anything else. Little Miss Sunshine had determined that I would be okay, and she gave me the green light for drinking beer (to aid in my recovery.) She brought me a nice hot cup of coffee (because I couldn’t drink beer for breakfast), and I waited until I felt good enough to get out of bed.


Lying around in bed didn’t make me feel much better, so I had to get out of the house. As the day wore on, I started moving around a little better. I hopped in my truck to go get it washed, which was something I’ve been meaning to do anyway. After stopping to pick up a few Halloween treats for the trick or treaters, I went back home. I decided that I should start self-medicating, so I popped open my first beer. I heard that the Dirty Party Cycle was stopping by to show off his new bike, so I waited around for him to arrive.


When he got there, I was feeling a lot better. He grabbed his new bike from his truck and I looked it over. Since the douchebag that stole his previous bike has never been caught, Mr. DPC had to buy a new one. He ended up with a Giant Talon 29er, which he seemed to be happy about. No new bike could ever replace the original Dirty Party Cycle, but this one is a good start. I decided to grab my own big-wheeled bike and we both headed down the street to see my neighbor, Chili Man. He immediately took a liking to the DPC’s new bike: 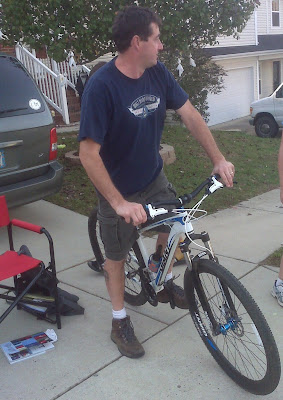 He rode it around a bit, and quickly realized what this whole clown wheel thing was all about. He also said something about how shitty his current bike felt in comparison, but I didn’t take offense to that. I built his bike out of spare parts, so it was the best that I could do. Just because you pour syrup on shit doesn’t make it pancakes.


A little stroll around the neighborhood felt good. My rib still hurt like a mofo, but it was nice to pedal at least a little bit. I can actually feel the crack in my rib when I poke it with my finger, and I must admit that it’s kind of neat. I’m not sure how long I’ll actually be off the bike, but I hope it isn’t long. It could take up to six weeks for this shit to heal, but I don’t know if I can wait that long. Maybe I can go out for a ride on the trail somewhere, if I’m careful. I think the pain of not riding will be worse than the pain of my crash injuries anyway. All I have to do is convince Little Miss Sunshine and I’ll be back on the trail in no time. I’m sure she thinks I’ll end up being hurt worse. She may be right. I could end up doing this: 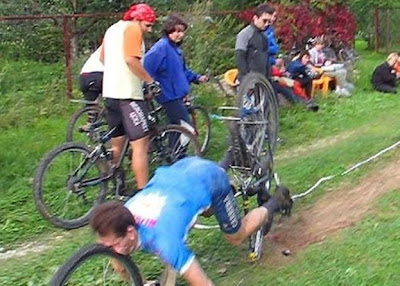 Shit. That photo does nothing for my argument. I’ll have to come up with something else.
Posted by TheMutt at 8:12 AM