I love that video. Anyway, where was I? Oh yeah, I’m talking about last Sunday. Two days after The Accident, and I was already going crazy from being off the bike. With all of this beautiful weather, it was hard to hang around the house in an attempt to heal myself. I couldn’t stand it anymore, so I decided to take a chance and go for a ride.


Last week I had already planned to ride for three days straight (Friday, Saturday, and Sunday), but my McRib action put a screeching halt to that shit. I already told you that I bailed on the ride at the Kerr Scott Trail System, and I was pretty disappointed. Sunday was supposed to be a ride with The Chili Man, his youngin’, and Lunchbox at Sherman Branch, and I didn’t want to miss that one either.


You see, The Chili Man is trying to get hooked on this whole mountain biking thing, and I had offered to take him on an easy ride on the trail Sunday morning. He knew of my injury, and probably would have understood if I cancelled the ride. I figured it wouldn’t hurt to go out on the trail at a nice easy pace, and it might even keep me from going crazy. I decided to go, and we loaded up our bikes and headed out on that chilly morning.


We got to the trail, and I didn’t feel too bad. All I had to do was cruise along at an easy pace and keep myself upright. Usually that’s not a problem, but I didn’t want to take any chances. We headed out on the trail, and I hoped that I had made the right decision. I took it easy, and grabbed a few photos along the way: 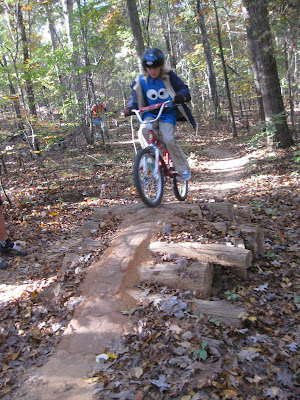 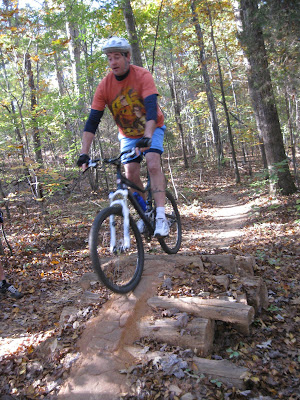 You may notice that The Chili Man isn’t riding his custom spare parts bike that I built for him. After riding around on “better” bikes than his da udda day, I offered up my squishy bike, Goose. I would let my little-wheeled full suspension Diamondback Sortie 3 be his “Wingman in the woods.” He seemed to enjoy the comfort of the quality Fox suspension, and I was glad to let him take it for a spin. Anything to get someone hooked on this shit, you know?


We rode along, and I was pretty much pain free. Well, one little jump jarred my ribcage a bit, and I also banged my freshly scabbed over knee on my handlebars once. I made sure to play it safe after that. Well, as safe as I am capable of playing it anyway. When we came to my favorite feature out there (the giant log skinny), I gave our little riding group (and some curious onlookers) a demonstration. While I know it’s not wise to attempt such a thing with an injury like I have, I did it anyway. So much for playing it safe.


Speaking of playing it safe, The Chili Man was having none of that. He jumped the jumps, and hit all of the features on our little trail adventure. He even did this wooden roller coaster Loch Ness monster-looking thing without even stopping to eye it up first. I didn’t get any photos of it, since it caught me by surprise. I asked him to do it again, but he declined. Good call. The next stop at the log skinny was a little different. 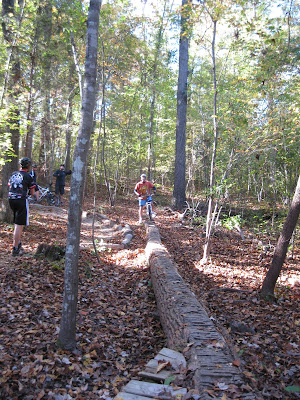 Yeah, he really wanted to do it. For someone that’s supposed to be a beginner mountain biker, he sure had some balls. I waited with the camera (and my first aid knowledge) for him to try it, but it never happened. I know he really wanted to do it, but it was probably better that he didn’t. I know he’s kicking himself in the ass for not trying it, but he can always get back out there any time for another go. As for me, I decided that I wanted to temp fate and give it another shot: 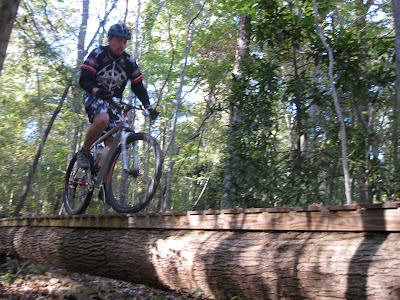 Who needs time to heal? Not me, I guess.


We rode the trail to the end, and thoroughly enjoyed it. I jetted up ahead to snap a “group shot”: 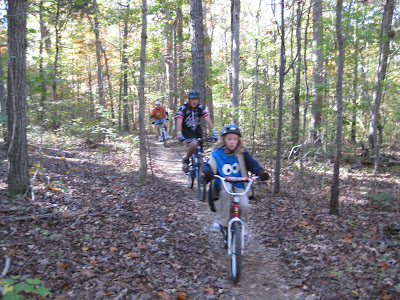 Even though it probably didn’t seem like a great idea, I was glad to get out on my bike. The fact that The Chili Man came along was a bonus. We didn’t ride very fast, but it was still a whole lotta fun. I’ll take it easy from now on though, I promise. At the very least, I’ll take the rest of the week off from the bike, but I doubt I’ll stay off of it this weekend. It’s fall around here, which means good weather. As long as I don’t “fall” for a while, then I should be just fine.
Posted by TheMutt at 8:10 AM