Time To Move On

All of the bad stuff I talked about yesterday is over. I don’t want to dwell on it too much, so I’m through talking about it (well, in a minute anyway.) I had a bad experience at a business, and now I will take my money elsewhere in the future. I tried my best to tell you about it without really tearing into the shop (believe me I wanted to), and I feel like I got my point across. I appreciate the couple of comments and the shitload of e-mails I got yesterday though. I really do. Like I said, my intent wasn’t to bash them at all. I’m just a regular guy, and this is no different than me telling a group of my friends about a bad experience I had somewhere. Of course I have a much bigger audience here, and I always tell you what’s going on in my bicycling world. 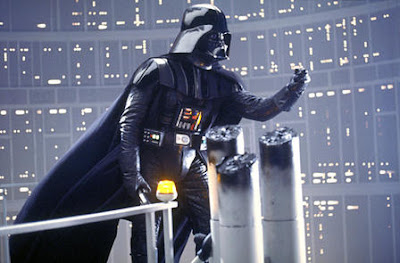 Now, I’ll get off of my soapbox.

Guess what? I actually ride a bike. I know it seems like it’s been a while, but I actually got to hop on my two-wheeled beast over the weekend. Since I was on call though, I never got a chance on Friday evening to convert my bike to singlespeed. On Saturday I had to build up Lunchbox’s bike, so that took away my valuable conversion time. I did manage to get out to Sherman Branch on Saturday morning. I had to work for a little bit, but when they left me alone I headed out to ride with Little Miss Sunshine. 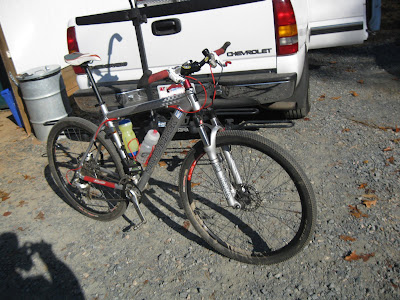 When we left the house it was kind of chilly outside, but at the trailhead it was nice and warm (at least to me.) The weather was perfect, and I couldn’t wait to get on the trail. Little Miss Sunshine headed out first, and I told her I would catch up. After hauling ass through the woods, I finally caught up to her. She said she was riding slow, but I beg to differ. She’s a lot faster than she thinks. 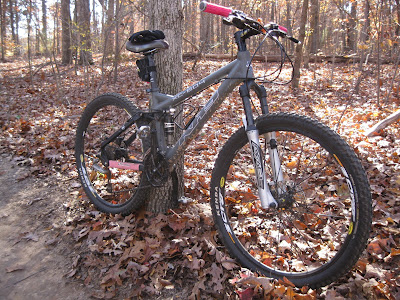 After a short break, we rode the rest of the trail together. The pace was nice, and I was happy to be back on my bike. I suffered no ill effects from my broken rib, and I was glad to be (almost) healed. I actually forgot I was hurt until we finished the ride. Little Miss Sunshine seemed pretty happy to be out on the trail, and even let me take her picture: 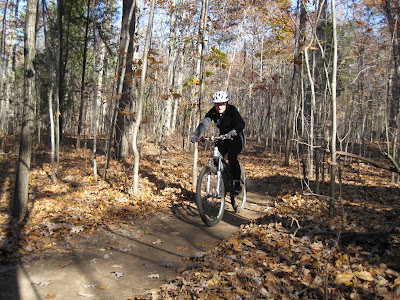 Since this is my blog, I begged her to get a photo of me. She suggested that I ride some of the features, but I already have plenty of photos of me hitting everything out there. I just wanted any photo of me riding, basically just to prove that I was there. Here’s what she got: 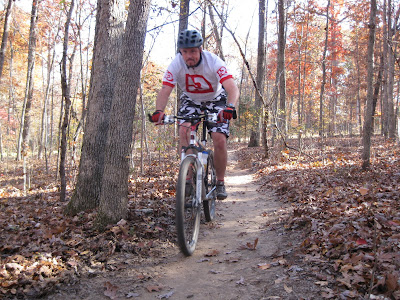 When we finished the ride, she headed out (we drove separately.) I decided that since my job hadn’t called that I would head back out for another lap. I refilled my water bottle and got right back on the trail. In the first section I started picking up speed, hoping to get in a fast lap time. As I rounded a corner by the trailhead, I saw someone standing next to the trail. It was world-famous blogger Rich Dillen. I didn’t have my camera out, so you’ll have to take my word for it. He said, “What are you doing? The team ride was earlier!” “Oh yeah”, I said, “we’re teammates now.” We shot the shit for a little bit, until some other local riding friends rode up. I decided that I would join in with them on their ride to see if I could hang. I need to ride with people faster than me, so here was my chance. Dicky would have killed me out there anyway, so I guess it’s a good thing I got there late.


I joined in the group and they started off at a good pace. I was feeling mighty fine, and I kept up with them. I was pretty proud of myself until we came up on a drop-off on the trail. You can either go around this drop off, or jump right off of the wood plank, roughly 2 ½ feet down (I’m guessing here, so don’t give me shit.) I’ve done this many times before (even once earlier that day) so I knew it wouldn’t be a problem. I came down a little sideways though, and burped my rear tire. I didn’t see any fluid leaking out, but I had lost all but about 10 p.s.i. of pressure. I hear someone from the group say, “Flat?” and I replied with an affirmative.


I wanted to keep riding, but I didn’t want to use my tube. Since I figured that all of the fluid was still in the tire, I busted out my Awesome Strap so I could use my inflator. The tire aired up just fine, and I heard a pop when the bead sealed. Excellent. I hopped back on and attempted to catch the rest of the group. One guy (Rod) came back for me, but I was a good ways down the trail by then. After I caught up, the group decided to split up.


I bailed on the ride at that point, and decided that I needed to get on with the rest of my day (I had a bike to build, you know.) I had a blast out there, but I didn’t escape the inevitable mechanical issues (flat in this case, but whatever.) Luckily it was only temporary, and The Big O will live to ride again another day. I also reviewed a new product sample that day, but since I’ve gone on long enough I guess I’ll talk about that tomorrow. At least I got back on the bike again, so now all is right in my world.
Posted by TheMutt at 8:18 AM

Ha. No way. I'll stay off my soapbox for that one. That's too much controversy even for me.