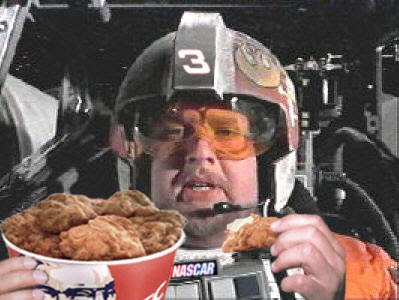 I’ve been contemplating the whole single speed thing for quite a while now, which was probably not long after I started riding big wheels. I bought all the crap and nonsense to do the conversion, but I could never fully commit to losing my gears. Until I could make up my mind, I decided that I would at least lose some of my gears and do a 1X9 conversion on The Big O. I took a bashguard off of a single speed crankset I had, and just replaced my big ring with it. It was easy to do, and more importantly undo if I needed to.


I rode the 2X9 setup for a while, mostly because I hadn’t found anyway to keep my chain from popping off when I removed the front derailleur (and the small chainring.) Last Friday, while I was up in Statesville, I stopped into First Flight Bicycles and the topic of my 1X9 came up. My pal Wes was sympathetic to my plight, and offered up this fancy device to help keep my chain in it’s proper place: 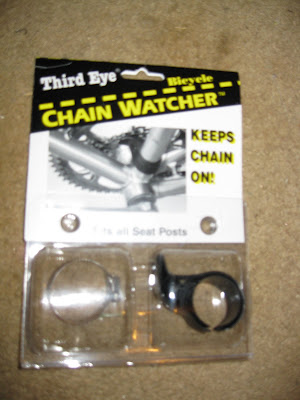 It says right there on the package, "KEEPS CHAIN ON!" I figured that was good enough so I bought it. The next day, I put my bike on the workstand and started pulling shit off of it. I removed the left shifter, front derailleur, and the small chainring on my crankset. That was a lot of stuff to remove, so I’m sure I saved a little weight (I didn’t bother busting out the scale, since I could stand to lose some weight myself.) Anyway, the Third Eye Chain Watcher went on without an issue, so I grabbed a beer and admired my work. 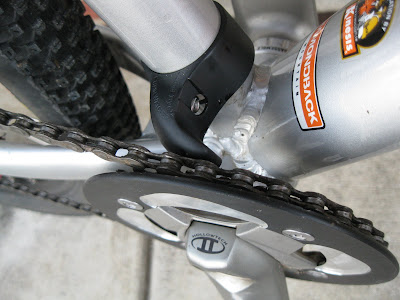 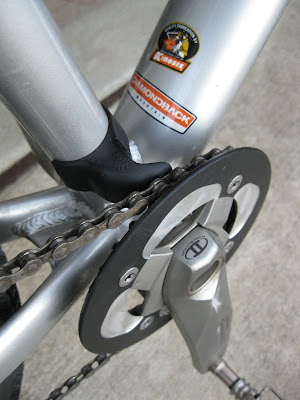 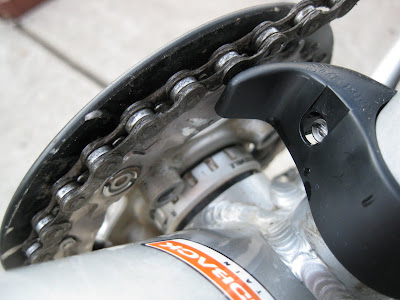 And while I was at it I slapped a new sticker on my bike too: 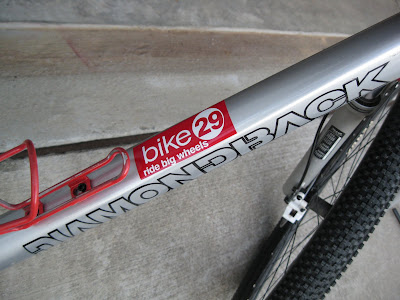 Just like when I helped my friend the other day, I decided to race in the Winter Series Race without thoroughly testing out my new equipment. Did it work? You betcha. I never once dropped my chain, and actually I forgot that the Chain Watcher was even on there watching my chain. However, after all that time and effort I invested in my mechanical action, another part to complete the 1X9 conversion arrived in the mail the very next day: 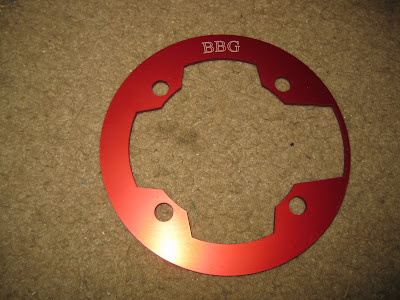 I decided to go with a BBG Bashguard because they are strong, light, and made right here in the U.S. of A. Also, they have a good range of colors (so I could get a red one to match the rest of my accessories.) I didn’t even have to remove the crankset to replace the other bash guard I had on there, so installation was a breeze: 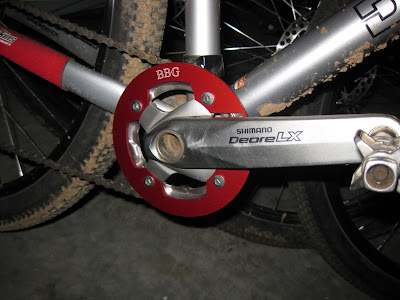 
No, I didn’t get to test ride it, but I am very happy so far. It looks good (to me, because I don’t care if you like it), and it seems like it’ll do it’s job properly. The best part? All BBG Bashguards (for mountain bikes anyway) are guaranteed against bending or breaking forever. They must really believe in them to back it up with a warranty like that. All of their bashguards are only $18 (including shipping), and it took less than a week to get here to Charlotte all the way from Oregon. I’m sure I’ll talk about it as the season goes on and I get some more riding in, but so far so good.


My 1X9 conversion is complete, and I’m glad I did it. I never really used the little ring anyway, and over time I became less fond of the big ring too. It just made sense to get rid of them both. As far as getting rid of the gears in the back, that’s probably not gonna happen for a while (if at all.) I’m in such piss poor shape right now that I need all the gears I can get (at least on the rear.) Now, what the hell am I gonna do with all of those singlespeed parts I’ve been collecting. Hmmmm.
Posted by TheMutt at 8:14 AM