Night Time Is The Right Time 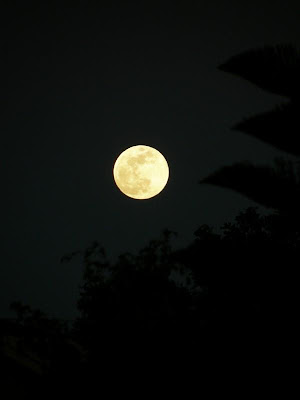 Finally, I got out for a ride. As an added bonus, I got to ride in the dark. I set out to ride at Poplar Tent, since I knew it would be in decent shape (it usually is even in shitty weather.) I knew I wouldn’t be disappointed. I got a new light just before Christmas, and I was itching to try it out. Actually, I was just plain itching to get out and ride my mountain bike on a trail.


First things first, I did bring along my brand spankin’ new GoPro HD HERO, but I’m such a total newb with it that I didn’t manage to get any video at all. I “thought” I turned it on and set it to record, but I was wrong. So, sorry to disappoint you. I guess I’ll post up some rad video action another time.


Anyway, I got there at around 6:00 p.m., and it was dark as well, night. Even though the trail is only a few miles from my house, I felt like I was out in the middle of nowhere. I couldn’t see shit out there when I got to the parking lot, so I knew that my lights would be extra effective when I got out on the trail. I grabbed a flashlight and set it up on the back of my truck so I could see what I was doing.


I didn’t think to take any photos, since I thought my video camera was rolling. Stupid me. Anyway, when I finally got ready I headed out into the night with only my helmet and handlebar-mounted lights to guide me. It’s been a while since I rode at night (way back at the Tree Shaker), so I was a little nervous. Here I was in the middle of the woods all alone in the dark just to get my riding fix, and I have to admit that I was a little excited. I kept looking around in the woods as I rode, hoping to catch a glimpse of the infamous North Carolina Bigfoot that I hear lives in these parts. 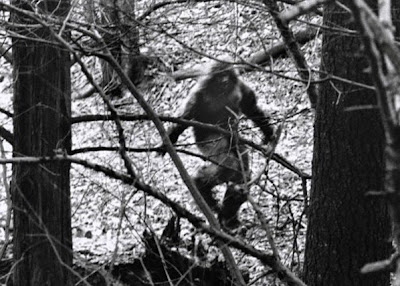 So yeah, it was a little bit spooky out there. I enjoyed it though, and the ride couldn’t have been better. Since I thought I was getting some good video while I rode, I was a little braver than I normally would have been in the dark. I rode most of the ladder bridges, rode through Gravity Cavity, and even took a turn on the teeter totter. I nearly busted my ass several times, but it was a ton of fun. I kept looking behind me the whole ride though, because I thought I heard something following me. Maybe it was my mind playing tricks on me, but at least it made me ride faster. I saw lots of little red eyes in the woods, and every once in a while I would see strange shadows off in the distance. What a fun ride. I’m glad I wore my new socks: 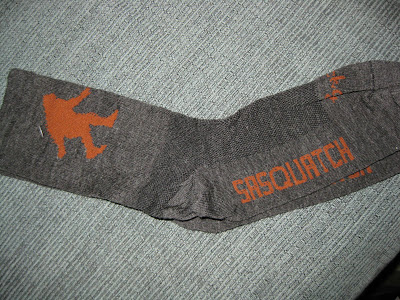 Next time I’ll pay better attention to the camera, and hopefully I’ll actually get some video to show you. I spent most of yesterday studying the directions, so there can be no more excuses. Well, unless Bigfoot gets me. Hopefully I’ll catch that on video though, and since my camera is HD it won’t be all blurry and shit.
Posted by TheMutt at 8:17 AM