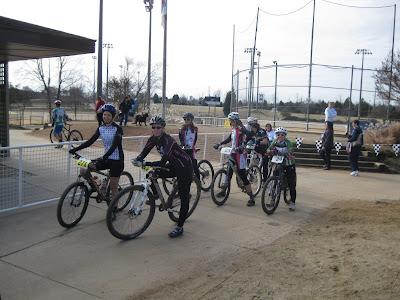 Wait, I’m not in that photo. Actually, I’ll talk about another race first. On the far right in that photo, you might recognize B-43’s Little Miss Sunshine. She decided to wake her mountain bike up from it’s long winter nap and race in the Winter Series Race #3. Since the weather was surprisingly warm for January around here, she felt that it was time to make her season debut.


All of the members of the local women’s mountain bike club, the Dirt Divas, gave her plenty of encouragement so she decided to get out and race. Here she is getting some advice from local Sport Women’s racer, Stephanie: 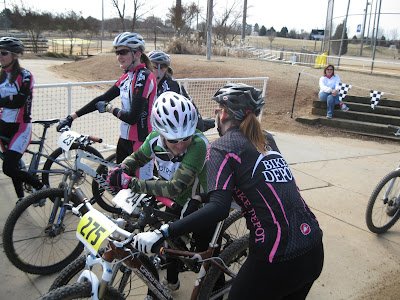 At 10:30, all six riders in her class lined up for the start. She was nervous, but ready: 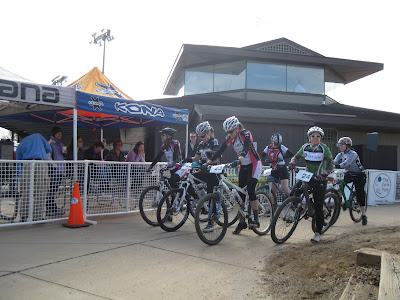 When they were given the signal, the women took off. Not satisfied with starting out mid pack, Little Miss Sunshine took off like a bat outta hell. I was shocked, but very happy for her. She left all the other ladies in the dust, sprinting from the start/finish line to the entrance to the single track. At this point Lunchbox stole the camera from me and headed to the woods to get some action shots. I stay near the end of the course to cheer her on.


After lap one she had fallen to 5th place. The first two women in her class were part of some roadie team, so they were doing pretty well (and obviously not beginners like the class name would suggest.) The other two women ahead of her were looking pretty rough after only one lap, while Little Miss Sunshine looked like she was settling in and finding her rhythm. On lap two, she was gaining speed: 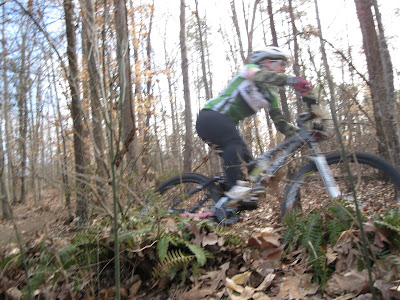 Too much speed makes for a blurry photo.


She came around after lap two and she had moved into fourth place. The woman in fifth place was right on her wheel though, but she was looking really tired. Little Miss Sunshine actually looked like she was getting stronger. I cheered her on and watched as she gunned it for the singletrack. She was moving along pretty well, and tried her best to put a bigger lead on the fifth place rider, all while trying to catch the woman in third. 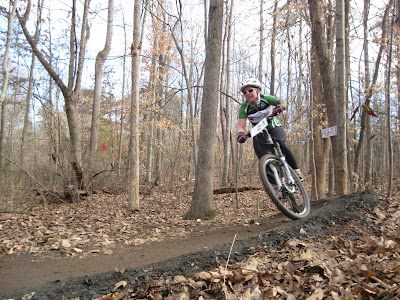 As she came around to the start/finish line again, the fifth place rider was nowhere to be found. I noticed that third place was just up ahead, and yelled to her that she was doing fine. There was plenty of racing left, so she took to the single track with more speed: 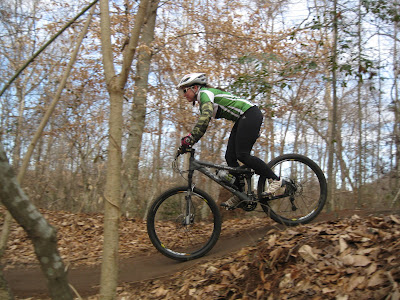 All of a sudden I saw that she was in third place. Fourth place wasn’t far behind, but LMS was putting the hammer down. She seemed determined to catch the leaders, especially with only one lap to go. I knew that third place was hers to lose, but second and first didn’t seem too far out of sight. She blasted through the trail one last time, with a smile on her face even: 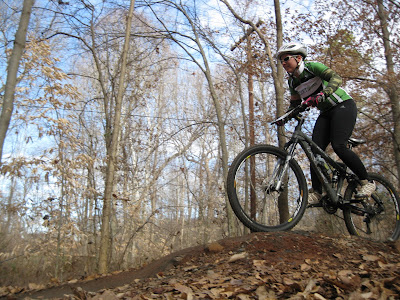 When it was all said and done, the professional roadies were unbeatable. However, Little Miss Sunshine finished strong in third place, and she was happy to be finished. I was so proud of her for deciding to race, and even more for getting a top three finish. The was a snafu with the trophies though, so she’ll have to wait a little while to collect her prize. After not riding much over the winter (and not training for a race), she did awesome out there.


What about my race? Well, this is my blog, so I know you expect me to talk about myself. This time though, Little Miss Sunshine deserves the spotlight. I’ll recap my pathetic race tomorrow. I’m really tired after driving right from yesterday’s race all the way to Manassas, VA, so I’ll need a bit of race before I write anymore. It won’t be worth the wait, but wait anyway.
Posted by TheMutt at 7:02 AM