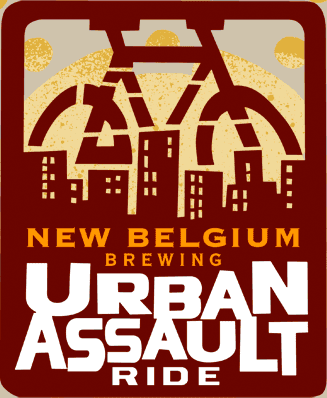 Yep, it’s time once again for the New Belgium Urban Assault Ride. What, already? Yeah, that’s the same thing I said. The date was moved up this year, so that makes it seem like I was just there (it was only six months ago.) This year, I’m in once again. I have a new partner this time around though (sorry Dirty Party Cycle.)


After photographing the shenanigans and watching everyone act like fools last year, Lunchbox told me he wanted in. Actually, he told me that on the way home from the event. When it came time to sign up, I couldn’t say no to him. He’s pretty excited too.


The checkpoints have been revealed, along with the roads we’re not allowed to use. It’s pretty much the same thing as last year. You know, ride to checkpoints all over the city, do silly challenges at said checkpoints, and make it back in time to drink beer (none for the youngin’ of course.)


There are five “named” checkpoints, which I used to create a route for us, plus two “mystery” checkpoints. The clue for the first one came out yesterday, which was a crossword puzzle and a word scramble that reveals the name of the place we have to find. I figured it out lickety split, so at least I can incorporate it into our route. The second mystery checkpoint will be revealed when we get to the first, so that puts us in a little bind.


Do we ride the route as planned and hope the second mystery checkpoint is somewhere along the way, or do we go there first and figure out the rest of the ride? I’m still not sure what we’ll do, but if I did know, I sure as hell wouldn’t say it here. Too many of my “competitors” read this shit.


Also, we had to take a quiz to determine which wave we start in (there are three if I remember correctly.) Our quiz score was pretty high (better than last year), so I’m pretty confident that we’ll start in the first wave again. At least we have a little advantage.


In all, we’ll probably end up with around twenty miles or so again, depending on where they throw in mystery checkpoint number two. I’m not worried about it though, because we can’t possibly win it. The team that won it last year had a super fast time. In fact, it was so fast I don’t know how it was even possible. I don’t think I could’ve done it that fast if I had a motorcycle and skipped all the challenges.


We do have to hurry though. I’m hoping to be done in under two hours again this year, so the pressure is on. Plus, Lunchbox is heading off to Florida for Spring Break that evening, so there’s no time to dilly dally.


If you want a refresher, here’s the video I made from last year’s ride with me and the Dirty Party Cycle.


I’m probably bringing the GoPro again, so be on the lookout for more video next week or whenever the hell I feel like editing it.

I guess that’s it for today. I should be back on Monday with a report and such. Oh yeah, sorry about not being here yesterday, but I told you I needed a break. My doggie is hanging in there, so we’re good for now.


The whole situation is still weighing heavily on my mind though.
Posted by TheMutt at 8:16 AM

I'm totally glad you cleared up that the last Urban Assault was only 6 months ago, because when I saw the ad for this I was scratching my head wondering how it had been a year since I enjoyed your adventure last time... so I'm not insane!