Do It In The Dark 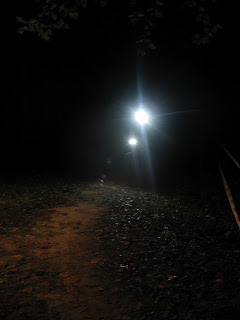 Saturday night I had the pleasure of attending the 2nd Annual Cackalacky 500 at .  It was eight hours and twenty minutes of racing starting at 10:00 p.m., and I was there to help out.  Since I wasn’t racing, I brought my pal Tom along for a little volunteering.

It was also his very first night ride.

Little Miss Sunshine was kind enough to hook us up with some glowy goodness or our bikes, so we setup our shit to look like a rolling party while we rode out in the woods all night. 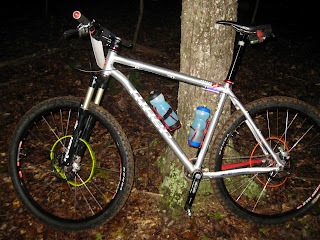 Without the camera flash… 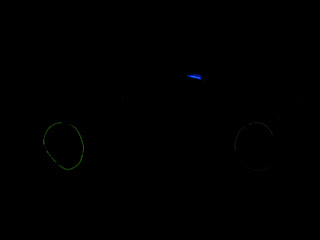 We stood at one of the intersections when the race started to guide the participants along the race course, and we planned to ride a sweeper lap when they all went by.  However, things changed when someone came out of the first loop and told us that there was a guy out on the course with no lights.  Tom and I rode in to look for him, and after about three quarters of a mile we found current Tarheel Trailblazers Ed sitting in the dark.

He told us that his light quit working and that he also somehow lost his flashlight.  Tom and I escorted him out of the woods and back to safety, and he was able to grab a spare light and get going again.  I hoped that this would be my only rescue of the night.

We eventually hit the trail, stopping every once in a while to camp out in random spots along the course.  We scoped out dangerous areas, and provided encouragement when each racer rode by.  It was a good time out there, and we only had to help one guy adjust his helmet light.

We heard about an oasis setup on the course by some of the volunteers, so onward we rode, looking for the halfway point.  We eventually found it. 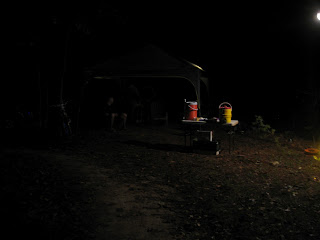 It was an aid station stocked with water, snacks and cheering volunteers out in the middle of nowhere.  They had music playing, and they were even grilling some brats to pass the time.  It was just like a camping trip minus the sleeping part, so we stopped to hang out a while.  We had a blast heckling the participants, and even watched as nearly all of them narrowly avoided a stump poking out in a blind turn.  It was really fun, but eventually we had to get the hell out of there and patrol the course.

Even though we were “working”, we had a blast night riding.  Tom got used to being out there with just the lights on his bike and helmet to guide him, and found navigating the corners in the dark to be quite exhilarating.  Near the end of the trail though, the temperature had dropped considerably, so we hurried back to the star finish line to warm up a bit.  We hung out with the promoter for a while, ate some soup, and talked about all kinds of bike stuff.  I couldn’t really get warmed up though, so I decided that I would head back to my truck (parked along the course) and bundle up in a chair with my sleeping bag.  We rode enough out the course anyway, and if someone needed help they would know where to find me.

I eventually dozed off at around five o’clock, and woke up just before the race ended.  We all headed over to get some breakfast, and I’m glad to say no one needed any first aid.  I was glad to be out there helping, and any race where I don’t need to bandage anyone up is a good one.  Up next was the podium presentation.

In the duo category, Big Ben and his teammate took the top spot. 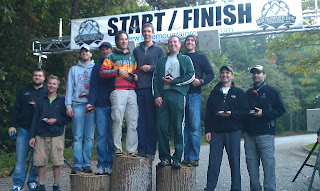 I tried to get a shot of the women’s podium, but Bike Shop Girl walked in front of my shot. 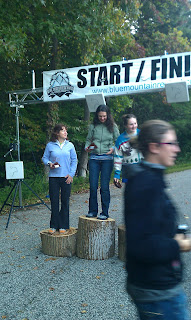 The men’s podium doesn’t tell the tale of how exciting the race was.  My main man the MadSS was rocking the steady pace, gaining on the leaders throughout the night.  He eventually made it up to 2nd place, and he was closing in on Chris Strout.  During the final laps though, Chris turned in on and set a blazing fast pace and got the win. 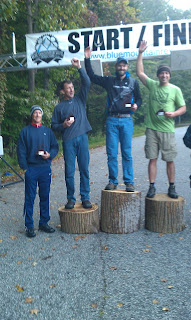 Congrats to Chris and the MadSS for a hard fought race.

It was a fun night, but I’m still feeling the effects of it.  Hopefully I can recover and get out on my bike real soon…