Of course I’m talking about Saturday’s trip to one of my favorite places to ride, the Forks Area Trail System.  Although it was a Dirt Diva trip, a couple of us fellas hit the road to ride down there too.

Before I left the house, I made sure to grab the cooler.  The little lady made sure to pack us some food before she left (she didn’t ride down there with us), and she let me know what was inside. 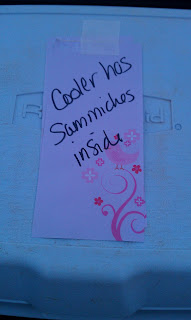 I had to add a few items to the cooler, so I made sure to modify her note to accurately reflect the inventory. 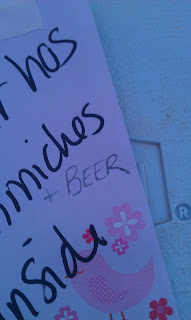 Three of us hit the road, hoping to make good time down to .  We flew down the interstates, eventually passing the all-girl convoy on the highway somewhere in .

We beat them to the trail head, which was a good thing because there were a ton of them out there. 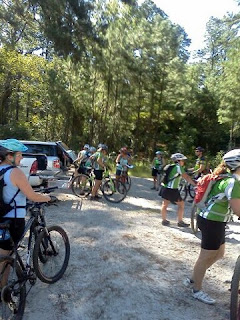 With all those ladies hitting the trail, we made sure to get out there ahead of them so they wouldn’t school us on the proper way to ride.  We paused for a moment to look at the map before we started our ride. 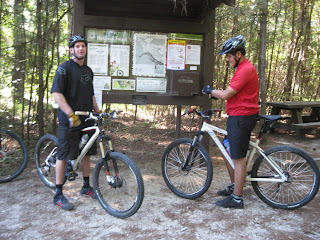 Tom and Lunchbox were ready.

We hit the trail in a hurry, flying down the trail with way too much speed.  It was hella fun, and I couldn’t stop smiling.  It was Tom’s first time out there, and he was having a blast too.  After a few miles in though, I noticed something wrong with my bike.  I pulled over to check it out, and found the left crank arm was a little loose.  I pulled out my multi tool from my Tülbag and tightened it down, and we rolled out again.

We were having fun again, but my problems weren’t over I would later find out.  I’ll get into that tomorrow though.  For now, I’ll get into another issue… 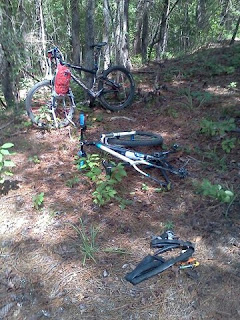 Bike problems, but not mine.

One of the Divas in Little Miss Sunshine’s group had a flat, and I heard they had a helluva time changing it.  She didn’t have a tube, so my little lady got hers out of her Awesome Strap and they tried to install it.

It had been tucked away behind her saddle for almost a year, and when they tried to install it in the tire it was leaking air.  After patching one hole, they found several more.  I guess that was a fail on my part, since I’m supposed to check these things before she goes out for a ride.  They eventually got one from someone else. 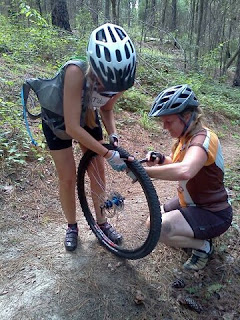 From what I heard they actually had a great time changing that tube.  They all seemed to learn something, and had a great time doing it.  Also, no one had to walk out of there.  They got to continue the ride, and that’s the important thing.  I wasn’t really that lucky, but like I said I’ll get into that tomorrow.

After the ride, most of us hung out there in .  One of the local Diva’s has family there, and they were kind enough to host a bunch of stinky, tired, and hungry mountain bikers.  Big thanks to Melissa and Shelley for that end of day festivities, and a huge thanks to the Divas for another fun out of town adventure.

Now I’ll have to talk about my ride I guess, but not right now.

You love it when I drag stuff out, don’t ya?