Pleased With The Service

With my broken bike loaded on the back of my truck on Saturday, I left the Forks Area Trail System and headed into town.  After the conversation with Mr. Shepherd, I remembered that the shop I was traveling to was the same exact one we went to when he was up here last Fall.  I remembered that the service was good last time, so I expected more of the same.

Boy, was I wrong.

I rolled up in the parking lot of Chain Reaction Bicycles in nearby , GA, and the place was packed.  I walked in and looked around, hoping that I could find a bolt for my crank arm, or even a new crankset.  I didn’t see anything after a trip around the store, so I walked over to the service counter.

The guy who helped us last time, Phil, was on the phone.  He acknowledged me right away, and you could tell he was trying to get off the phone to assist me.  When he finished the call, he asked what I needed.  I tried not to sound too desperate.

“I drove all the way down here from to ride FATS and I broke my crank arm bolt on the first loop.  I was hoping that you had one so I could get back on the trail.”

He looked around, but came up with nothing.  I told him I would take any crankset he had instead, and since I was riding a single speed it didn’t need to be fancy.  He dug around all over the shop, and had nothing I could use.

“We’re in the process of moving, so I don’t have a lot of spare parts right now.”

Seeing how disappointed I was, he asked what I was riding.  I told him it was a Niner One9, and he asked if I wanted to use his bike.

“We’re about the same size”, he said, “and you’re welcome to take it out.”

Wow.  Even though he remembered me from our last visit down there, I thought it was exceptional that he offered to give a (pretty much) complete stranger his bike to ride on a local trail.  I politely declined, not wanting to take a chance at breaking his stuff too.  At that point, one of the other mechanics walked in and heard what was going on.  He told me to wait a bit, and he would see if he could find something for me.

After a short wait, he came back and told me he found the bolt I needed.  He took it off a bike they took in on a trade, and installed it for me.  Phil tightened it down with the proper torque setting and told me I was all set.  After a nominal charge, I would be on my way.  I thanked him a bunch and told him how pleased I was with the awesome service, and he said that’s just the way they do things.  Even though my minor repair need wouldn’t make him a ton of money, he went out of his way to make sure I was happy and able to ride again.

I spent a little more money while I was there just because I thought I should, and walked out with a few items. 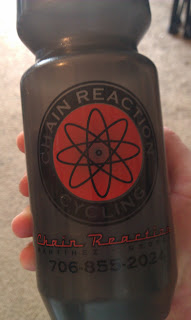 And a new bike computer: 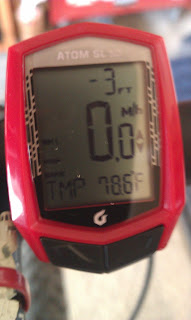 And I even bought a FATS sticker (which helps support the trails): 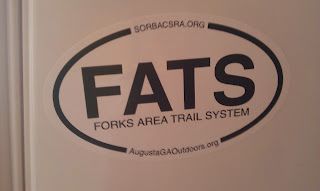 This was the second time I’ve been to Chain Reaction Bicycles looking for an instant fix to a mechanical issue, and those guys shined for sure.  If I lived down there, it would be my go to shop.  If you live near there, then it should be yours.  One thing’s for sure, next time I ride down there I’ll go spend some money.

Even if I don’t break anything during my ride.

NIce! Nothing beats great service at a shop. Sounds like they got it right down there.

Awesome! This is how you win in business.