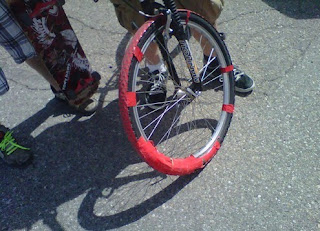 Remember when my crank arm fell off and I thought everything was all good in tha hood?  Well shit, would you know I’m still having issues.  Besides the fact that the crankset is pretty old, I most likely damaged it by riding without the bolt just to get the hell of the trail.  After Phil at Chain Reaction Bicycles torqued the bolt down to the proper specs, I didn’t have an issue when we finished the trail at FATS.  I thought I was good to go, but luck just isn’t on my side it seems.

After riding Poplar Tent Saturday morning, the bolt had worked itself loose again a little bit.  I tightened it down, but when I rode at the Cackalacky 500 it came loose a coupe of times then too.  Knowing that it’s probably gonna happen again when I couldn’t afford to let it happen again, I decided that I should do something about it.

Luckily, I had a slightly better than just kinda average crankset that I could use. 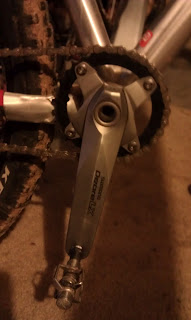 This was hanging around the shop after I parted out my squishy bike, and it saves me from having to buy another crankset right now.  It’s in pretty decent shape, except that the bottom bracket is a little wonky.  It will have to do for now until I get can get something else.  I rode it last night and everything seems to be fine.  Knowing how things usually go around here though, that won’t last long.

In other news, I decided to do a little work on our bikes.  First up, I had to replace the bottle cap on Little Miss Sunshine’s geared bike (I know, difficult work.)  She obtained a fancy bottle cap that matched her bike a while back, and I finally remembered to put it on. 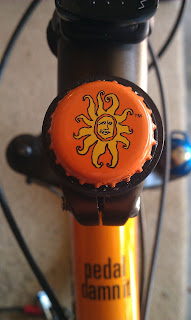 Next up, I had to re-Stans all our tires.  We have quite a few bikes, so it took a little while.  Luckily though, I don’t have to break the bead when pouring in that vile fluid. 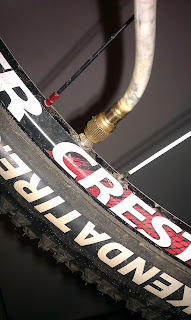 No, that isn’t one of those stupid Honey Badger Tires.

Since I had to air up a bunch of tires after filling them with stuff other than air, I finally got off my ass and did something about my less than stellar inflator on my air compressor.  I bought an inflator (with gauge) at a local hardware store and modified it to meet my needs. 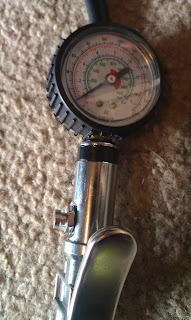 I used the valve head off of an old floor pump to make it bike-specific. 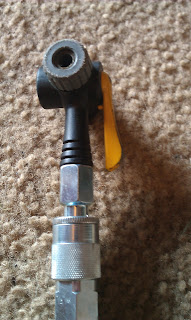 If I recall correctly, Dicky did something like this some time ago.  I was too lazy to call him up and ask about, so I fell quite lucky that I got it right on the first try.  After a successful test run (and subsequent airing up of all the tires I re-Stans’ed), I went around looking for all kinds of shit to air up.

Broken shit is not.