It's sometimes a lot harder than racing.  Some people call it training, but since my season is pretty much over I just call it getting out on my bike.  This past Saturday, me and the Dirty Party Cycle met up at the local man-made whitewater rafting place to get in some “quality miles.”  We started out early, because we knew it would be hot as shit come high noon.  We just missed a Dirt Diva ride by a few minutes, but I wasn’t totally upset about it.  Riding with a bunch of ladies would’ve been pleasant, but that’s not why we were there.  The plan was for multiple hours on the bikes, and to make it hurt.  Pleasant just wasn’t on the menu.

We started out on one of the newer trails, and it took me a while to get my legs going.  Pedaling a single speed after not riding for a few days wasn’t going too well at first, but eventually I started feeling good.  After the first loop was complete, I stopped back by my truck to grab a drink.  The pain was about to start.

We took off, trying to keep a fast pace.  The DPC and I took turns leading each other through the woods, and we were having a blast.  I had plenty of power on the climbs, and I felt like I could ride at that pace all day.  When I got to one of the bigger climbs though, I tried to mash up and my foot came unclipped.  I tried to clip back in as I kept pedaling, but it wasn’t working.  I stopped at the top of the hill and told the DPC that I thought there was something wrong with my pedal.

There sure as shit was something wrong. 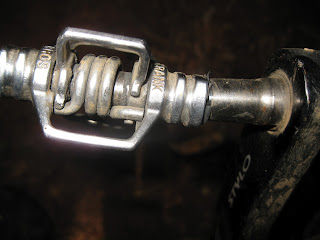 Yes, I bent the axle of a STEEL pedal.  While I have had issues with crankbrothers pedals in the past, I can chalk this one up to old age (the pedals, not me.)  I’ve had these things for a long time, and I figured that they wouldn’t last forever.  I didn’t think I would break a pedal in this manner though, so I guess I’m just a little shocked.  At 6’4” and 230 pounds I’m not freakishly large, but I’m starting to wonder if maybe I’m too big for little teeny tiny bike parts. 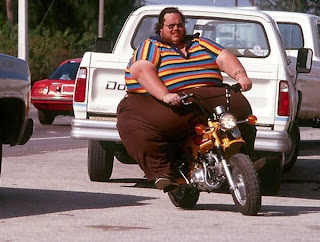 So anyway, I just so happened to have a spare set of pedals in the truck (because I know shit like this is bound to happen to me), so we took a quick detour back to replace them.  After a short wrenchin’ session, I was ready to roll again.  We picked up where we left off, and resumed the torture.

We rode for hours, and I barely had enough energy to make the last climb out of there and back to the parking lot.  We packed up our shit, changed our clothes, and walked over to get some grub and a few beers.  We rode our asses off out there, and had a blast.

My legs were tired, I broke some shit, and drank the hell outta some beer.

I’m actually glad I can ride for fun now.