Last Ride For A Little While


Last night was the last Tuesday ride with the Dirt Divas for the rest of the year.  It was down at in Matthews, NC, and that’s usually a little far for me to travel after work.  Luckily, I happened to be working nearby, so I got to go.  I arrived a little early, so I decided to get out and do a lap by myself.

Recently, a ton of work has been going on down there, and I must say I’m pleased with the results.  The trail is really fun now, and my first lap was pretty fast and fun (except for the hoards of walkers on the trail.)  When I got back to the parking lot, most everyone had arrived so it was time to hit the trail.  Since a whole bunch of dudes showed up for this one, they made us take off on our own.  Not a problem.

We flew around the trail at a good clip, with my pal Tom leading the way on his new bike.  About two thirds of the way in though, his bike started squeaking…a lot.  When we stopped to see what it was, I discovered that one of the bolts that held on his rear suspension had come loose, and it got pretty bent up in the process.  It was barely rideable after a trailside repair, so we decided to take a short cut to get back.  On the way, we stopped at one of the new sections out there that’s not yet open to the public.

There was some cool shit under construction. 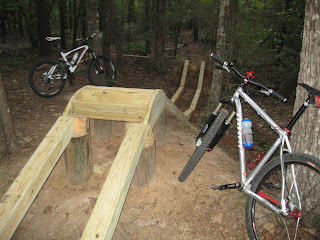 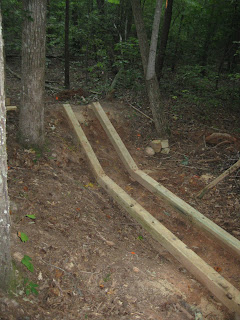 It’s nice to see some new stuff out there, and I need to make sure I’m at the next workday so I can help finish that awesomeness.  We made our way back to the truck, and decided to call it a night.  Tom planned a visit to the shop where he bought his bike to get a new bolt, and I planned to head home a lot earlier than expected.  Well, until I did something pretty dumb.

I was playing around in the parking lot on the way back to my truck, and somehow my foot got caught in the pedal and I flipped over backwards.  I honestly don’t remember exactly what happened because it went by so fast, but I do remember slamming down in the parking lot on my left ass cheek and my elbow at the same time, and then hitting my head (and my helmet popped off.)  I laughed it off at first, but when I got up I felt really dizzy.  I do believe that I was mildly concussed.

After taking a bit come to my senses (which seems to be still taking place as I type this), I noticed that my elbow was bloody, and had a strange looking knot on it.  It fucking hurt too. 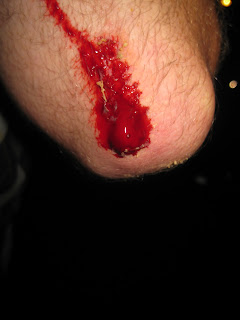 I grabbed my first aid kit out of the truck and tried to clean it up, digging out pieces of the parking lot as I went along.  I also took that opportunity (while I was probably still in shock) to check for any bone fragments or cracks, and I was satisfied that it was just a flesh wound.  It’s a really deep gash, but I didn’t see the need to visit a local medical professional.  I’m plenty qualified for first aid, and I knew that I could get a valid second opinion when I got home to Little Miss Sunshine.

My head was still spinning though, and it seemed to take forever to get thoughts from my head to my mouth.  I pretended that I was fine, but I think Tom knew better.  Since we live pretty close to each other, he followed me all the way home to make sure I was okay.  I made it, and I was pretty happy about that.

When I got in the house, the little lady checked me over.  She kept asking if I felt okay, and noticed that my eyes were crossing a little bit when I was talking to her.  I told her I was just tired (I was), and that I should be fine.  Still, she denied me my usual post-ride beer, which seems to be standard procedure with any kind of head injury.  We got my arm cleaned up again and properly dressed so I wouldn’t stick to the sheets at night, and I somehow managed to fall asleep.  When I woke up this morning, I still felt like shit.

Things are pretty fuzzy, and my elbow is throbbing (not to mention my head.)  Luckily, I work in a hospital, so if I take a turn for the worse I won’t have far to go.

I guess that means I’ll be off the bike for a little while.

Take it easy and listen to Miss Sunshine! Get well soon.

Thanks for straightening Dale's brake lever. I put it out of the way to test ride someone's front wheel which was disc-less. Didn't want to accidentally pull the lever...of course i forgot to put it back :)