Out on lap three, I started thinking about how the MadSS had been taking care of me.  Making sure I ate, drank plenty of fluids, and took it easy when my body told me to.  He said I should rest on the climbs, which I couldn’t figure out how to do on a single speed.  Still, I was trying to heed his advice, especially the drinking plenty of fluids part.  I was, and after barely a mile in, I had to pee.

I pulled off the side of the trail, did my business, and got on my way.  My legs didn’t feel too bad, and I was making sure not to exert too much effort on the climbs.  I even walked a few of the steeper ones just to be sure.  I wasn’t moving at a fast pace anymore, but at least I was moving…

Until I had to pee again.

Starting a race dehydrated and then trying to rehydrate took its toll on me, and now my bladder was protesting.  I ended up stopping to relieve myself three more times (for a total of five potty breaks if you're counting.)  I’m sure I would’ve made decent time if I didn’t have to piss so much.  There was nothing I could do about that, and at least I wasn’t dehydrated anymore.

And I didn’t have to resort to extreme measures. 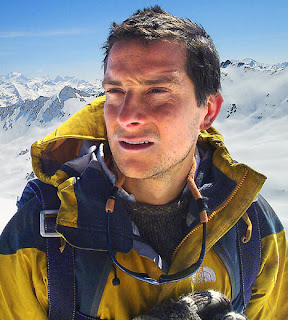 Eventually the lap was coming to a close, and I saw my kid again waiting for me. 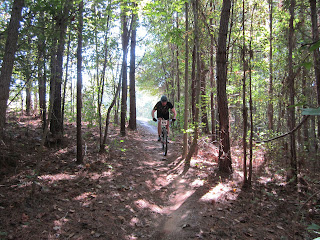 The leg cramps had returned full on this time, and as I made the climb up the hill to the start/finish line I couldn’t wait to get off of my bike.  Unfortunately, I had to just stand there in front of my tent again until my legs allowed me to dismount.

Eventually I could walk around, so I had another beer, ate some more food, and refilled my water bottles.  I decided to have a sit and take it easy for a little while.  Although I couldn’t foresee completing six laps that day, I knew I could at least get five in if I rested for a bit.  When I finally got back on the bike, I had enough time to ride for two more laps before the cutoff.

Or so I thought.

Heading out for lap four I was tired, mentally and physically.  My leg cramps were gone again though, so I focused on getting through the lap without any issues.  A few of the climbs didn’t seem so bad, but the longer ones were starting to wear on me.  Of course I walked a couple of the steeper ones, but things were different this time.  When I would get to the top, I had a hard time getting back on the bike again.  Eventually I would get going, but my legs felt like bricks.  The cramps had come back too, and I was getting a little dizzy.

I started to wonder if I would even make it out of there.

The trail looked totally different this time too.  Even though I am very familiar with that trail, I felt like I was riding it for the first time.  I was flailing all over the place on the downhill, and although I never crashed I sure felt like I would at any time.  Shit was getting real crazy, but I had to go on.  Plus, all the weird food combinations I’d been eating had given me a case of the riding farts.  It’s probably a good thing that no one was behind me for any length of time.

At the top of one of the climbs (I walked again), I tried to get back on my bike and my legs wouldn’t move.  Even though I commanded my left leg to throw itself over my top tube, it didn’t listen.  The next thing I knew I was leaning on a tree, holding on to my bike, and I swear I saw Bigfoot out there laughing his ass off at me.  After waiting out there for what felt like hours, I started to realize that I need to somehow get my ass moving again.

I did, and I still don’t know how.

I looked down at the clock on my bike computer, and realized that I’d been out there too long to make it back in time for another lap.  Yeah, that was still on my mind even though I was struggling through this one.  I had recovered enough to ride a little bit, but the legs cramps were still there.  Eventually the trail starting looking familiar again, and I knew I didn’t have far to go.  I saw a few other people out there hurting like I was, but I wasn’t about to stay out there and die on the side of the trail with them.  I used every little bit of energy I had left, and mashed the hell outta there with all my might.  I was pissed about such a shitty race performance, and I took it out on the trail.

Eventually I mashed my way up the last climb to the finish line.  I grabbed another beer and thought about what I had just done.  Four laps (and four beers) in a little under six hours, and I felt like shit.  I finished last (but still in the top ten because there were only nine of us), but I didn’t expect to do anything spectacular out there anyway.

We spent the rest of the day hanging out and finishing off the beer, and I might have even redeemed myself as "The Dicky Handler" since I got him home all safe and shit.
Maybe tomorrow I can recap this recap.

Email ThisBlogThis!Share to TwitterShare to FacebookShare to Pinterest
Labels: 6 hours, Grind On The Greenway, suffering

Baller dude!! I wanna do a duo race with you some time. 1 beer per lap per rider. We.will.kill.it!!!

Every race for me is all about survival.

I'm not sure if I'd want the pressure of racing a duo, but I could definitely handle the beer.