Too Fat To Dope 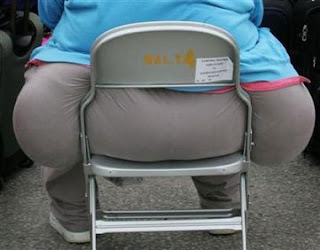 I’ve been silent on the whole “Lance is a cheater” thing, and for good reason.  I really don’t give much of a shit about road racing.  I do own a road bike and ride it every once in a while, but a roadie I am not.  I have been known to record some big road cycling races (including the Tour de France) on my DVR and watch them later, because I do love cycling, and I must admit that watching some of those guys battle it out in the mountains for weeks on end was kinda neat to watch.  However, I got bored with it easily.

With all the coverage regarding this latest controversy (including stuff like this ), I felt like I should weigh in for some reason.  I just didn’t know what to say, or if it even mattered.  So, here goes.

The general consensus around here (and by around here I mean by me) is that a) Lance is a dick, b) he’s always been a doper, and c) all of those fuckers are dopers.  Like Dicky told me da udda day (in person and in this post), maybe the clean ones should speak up and say something.  If I was one of the few that weren’t “enhacing my performace”, I would let someone know.  Shit, I would let EVERYONE know.

Sure, Lance has done a lot for cancer, cancer patients, and even fought hard through his own battles, but like I read somewhere on The Internets (so you know it’s true), “He would’ve gotten away with it if he wasn’t such a dick.”  On the other side of the argument, maybe it’s okay if he doped.

Bear with me a minute here.  He lost one of his balls, so he was already at a disadvantage with his testosterone production.  So maybe, he gets to dope just a little bit to make everything all even and shit with his competition.  Like, “Hey, I only have one nut, so can I pump myself with just enough testosterone to make up for it?”  Perhaps that’s how it all started, and he just took it too far.

I doubt it though.

Don’t get me wrong, I think Lance is a tremendously talented cyclist (along with the rest of the pro peloton.)  If he and the rest of the field raced clean, the competition would be just the same, don’t you think?  That whole “everyone is doing it” shit doesn’t fly with me, and I bet half (or even more) of those guys don’t believe that anyway.  Hell, most everyone I race against has a training plan, they put in miles upon miles of “zone riding”, and watch every single thing they put in their bodies.  Since everyone is doing that, that means I should give up all the beer and food, and start taking this shit seriously.

I guess I can afford to do that though, since I don’t have the pressure to win like pro cyclists do.  I’m just a guy that rides bikes (sometimes in races), and I thought the pros were the same way.  I think that’s part of why we as cyclists like to watch the pros in action.  Unlike major sports where they have sanctioned leagues and junk, any cyclist can train, Cat up, and compete with the big boys (okay, maybe not for the BIG races.)  It’s not like the guy playing flag football with his coworkers every weekend has any kind of shot at playing for an NFL team next Sunday.  In cycling it just seems like there’s a better chance to do something like that.  I’m not saying that it’s gonna happen, but the road is a little more navigable.


Wow, I just read what I wrote.  That was stupid.  I gotta stop reading my own shit.

In the end, none of this really matters.  I’m not competing at a high level, so even if I did have access to performance enhancing substances it wouldn’t make a bit of difference in my “career.”  Maybe this will help clean up pro cycling, so that the guys who were either too afraid or too honest to dope can now get a fair shake.  I might even keep watching it then.

I realize that my opinion doesn’t really mean shit in the grand scheme of things.  I’m a nobody in the cycling world, but I wanted to say something since I keep hearing about it from everywhere else.  Yeah yeah, opinions are like assholes…everyone has one.  And, everyone can be an asshole if they that’s what they choose.  If you actually took the time to read this (or any other post I’ve put here), then you know I’m only kinda serious.

I’ll still act like an asshole if I want though.  It’s my blog, and sometimes that’s how I want to be.  It’s too bad I don’t usually know what the hell I’m talking about (as you can plainly see.)

We’ll save that for the experts, which everyone seems to be these days.