Well Rested And Not Hungover

That's no way to show up for a single speed race.

I made sure that I was neither of those things.

The night before I had to get up early to drive to the Georgia Single Speed State Championships, I hung out with the MadSS and we cracked open my last bottle of Dogfish Head 120 Minute IPA. 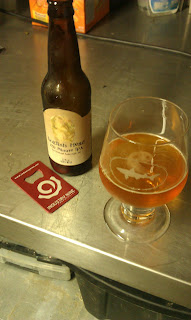 We hung out late into the night drinking beer and watching Little Miss Sunshine play with hew new welder (wait, what?), and when I got home that night I thought for sure I would end up skipping the race.  Somehow I got up the next morning, and we made the three hour drive to with plenty of time to spare.

I really had no idea what to expect, since I had never been down there before.  All I kept hearing was that the trail was super fast and smooth, so I figured that my 32X18 gear choice would be perfect.  We lined up at the start, and I had no idea where we were going or in which order we would leave.

Turns out we all took off at once. 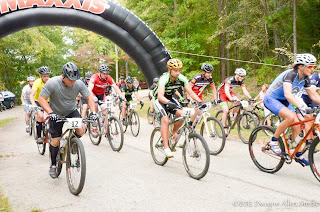 Since we all took off together, I didn’t know who was in my class.  I shot up the road and into the trail, following a long line of folks flying through the woods.  We kept a great pace, and I felt good…

I stay with the group (it wasn’t the lead one though) through most of the first lap, using that time to feel things out.  The course wasn’t one bit technical, and it’s flowy goodness was pretty similar to FATS.  Eventually I grew tired of the pace line thing, so I started passing a few people.  I eventually saw someone up ahead that looked like he would be in my class (because he looked like a big fella), and I creeped up on him. 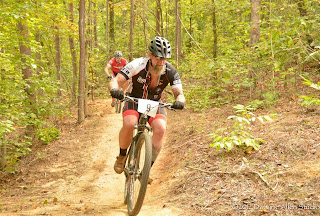 I kept my speed to stay with him. 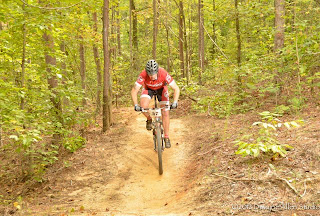 I remembered something that the MadSS told me Saturday night about toying with people, and I used that to my advantage.  He asked if I wanted to go around, and I told him that this was a good pace.  I could see he was trying to pull away, and he was working hard to do it.  I just stayed on his wheel, and when a climb popped up I gunned it and called out my pass.  I think I wore him out riding behind him for so long, because when I looked back he was nowhere to be found.  I still have no idea if he was in my class.

I started riding a lot faster, figuring that the course was the same for the whole lap.  I was right, and I was able to maintain a strong pace.  I even locked out my fork since there was no reason to have suspension out there.

I eventually wound up at the spot where we entered the trail, and it looked like I was done with my first lap.  I was confused, since we never passed through the start/finish line.  Lunchbox was confused too, since he never found the trail.  One of my favorite things during a race is seeing him out there, and I was sad that he couldn’t find us.  Hell, I didn’t really know where I was.

As I headed out on the second lap, I felt confident that I knew the trail well enough to go even faster.  I started passing people left and right, but I had no idea where I was in regards to the standings.  I just kept pushing, and I wasn’t even getting tired.  It was a great feeling riding that fast during a race and not having to slow down. 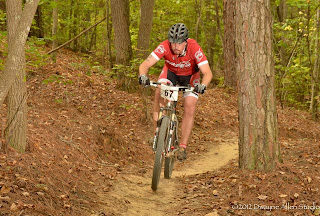 Eventually I passed fellow Charlottean Lee Flythe, and he voiced his disappointment in the lack of a beer shortcut like they had in years past.  I was disappointed too, since I would’ve gladly stopped for a beer.  He asked me what class I was in, and when I told him I saw a guy up ahead turn around to see who we were.  He gunned it, and I knew he was one of my competitors.

I stayed with him for a long time, but my back started getting a little tight.  I slowed up a bit on a climb to stretch out, and he was gone.  I felt better after a few minutes, so I sped up again to see if I could catch him.  I saw him again, but at that point I also saw the finish line.  I thought for sure I was in podium contention though.

We waited around for the rest of the racers to finish, but no one had the results yet.  I thought busting out two laps in a little over an hour was pretty good, but I had to wait around for two hours to see where I ended up.  I didn’t want to leave if I had a shot to get on the podium, so I decided to stick around while the results were tallied. 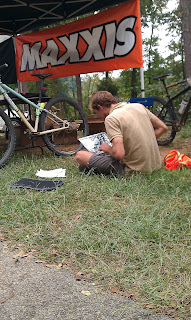 I eventually found my kid, who had been wandering around the campground looking for me. 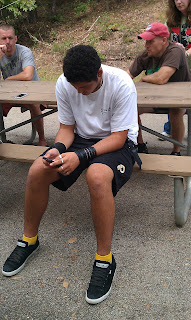 With no idea where I ended up, I had to find ways to entertain myself.  First, I took a photo of my bike to document how dusty and dry the trail was. 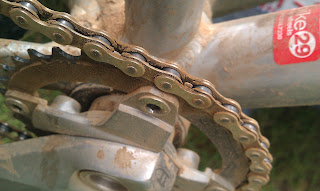 And then I watched in horror as 6 beers jumped to their death on the road. 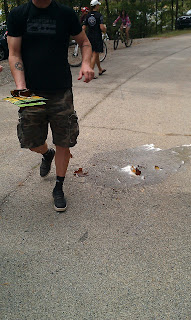 When the results were finished, they went right into the award presentation.  I didn’t end up on the podium, and I never find out where I finished.  No big deal, since I still had a good race.  It's not like I went down there to win it anyway.  The trails were fun and fast, and hanging out with a bunch of single speeders was way better than your average cross country racerfest.

And I ended up with a sweet pint glass. 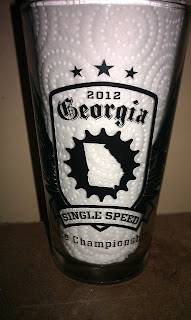