I’ve been talking a lot about our local trail Poplar Tent over the last few weeks.  You may be tired of it, but I don’t give a shit.  We lost a great trail that’s been around here for many years, and I still can’t believe it’s gone.  Since I was racing on Sunday, my last ride there was Friday after work.  I met up with my pal Hop and his friend Dave, and we took to the trail one final time.

We tried to ride everything out there, and we were making pretty good time.  I spent a lot of the ride just looking around at everything, most of the time is disbelief that it would be the last time I ever saw it.  The ride was awesome as usual, until we got to Gravity Cavity.  That’s when the rain started.

Poplar was one of the few (well, only) all weather trail around these parts, and riding itin the rain isn’t such a big deal (especially since it was about to close.)  There was a lot of lightning in the sky though, so we cut out a few of the last loops to make it back to the parking lot safely.  The rain kept falling while we rode, and I found it fitting that I said goodbye to it in the rain in less than ideal conditions.  That’s what that place was all about:  not so perfect trail that was a blast to ride.  Nothing around here even comes close to it.

After everyone left the parking lot, I was all alone there in the dark.  I sat at the picnic table for a while and thought about how great that place was to me over the years.  It was hard to get up from that table to leave, but eventually I did.  If I was an emotional type, I would’ve shed a tear.  Instead I pet Minnie one last time, knowing that she probably would miss all the people that visited there and hung out with her. 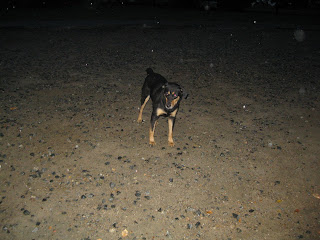 The next day was another ride, but I didn’t want to wear out my legs for a race the next day (stupid me.)  Plenty of people were out there though, including Little Miss Sunshine.  She met up with the MadSS and his Mrs., and they had a single speed farewell ride in the mud and rain.  When she came back from the ride, she brought a little of the trail home with her. 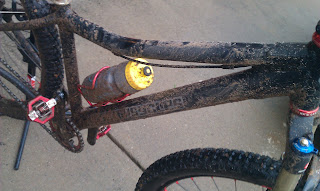 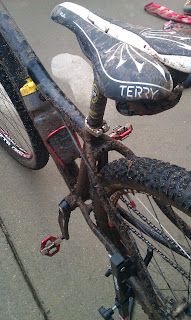 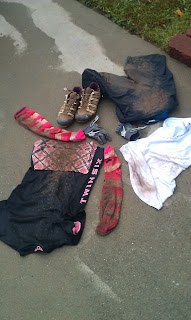 I got a little sad again as we washed off her bike and watched the last bit of that trail flow down my driveway.

At least we gave our old friend a proper goodbye.