Get Yer Party On


Saturday was our annual Tarheel Trailblazers/Dirt Divas year-end party.  This is a special time of year where both of oour local mountain bike clubs gather at a local trail for rides, socializing, and celebration.  It’s always a great time.

We got there plenty early, and when the other folks started arriving we gathered into groups based on ability.  Instead of getting ready like everyone else, I walked around to take photos and video.  That means that when they started rolling out, I wasn’t ready to go.  At least I got some photos to show for it… 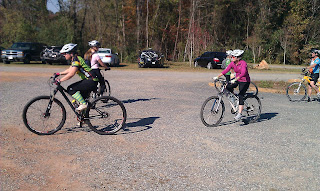 While everyone else decided where they were going: 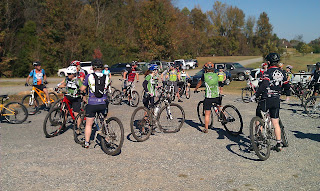 All of a sudden, everyone was gone.  Lunchbox and I were getting ready to head out to catch up to one of the groups, when we noticed that past Trailblazer President/current IMBA board member Mr. Jim hadn’t left yet.  The three of us rolled out together at an extra casual pace, since he’s been spending quite a bit of time across the pond doing everything except riding his bike.  That was fine with me, because after a long season of racing I had no intentions of going fast.

We caught up to a few of the groups here and there, and we had a great time out there.  Well, except for the little accident I had. 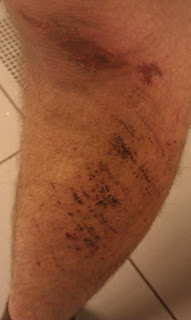 I washed out on a corner and slid down the trail.  It was a graceful fall (as graceful as a fall can be anyway), and it didn’t affect the ride too much.

After riding for a while, it was time to get back to kick off the festivities.  Since it was a party, Lunchbox even dressed up for the occasion: 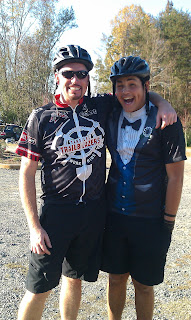 We had an awesome catered dinner, and after everyone stuffed themselves the Dirt Diva board members got up to speak to the crowd. 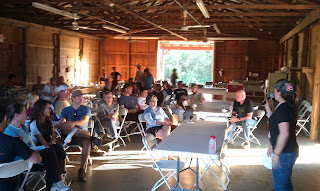 They introduced the new incoming board and thanked everyone for being there.  After that, they handed the mic over to me for the raffle.  With the help of a couple of Divas, I called out the winning numbers.  Lucky for you, there are no photos.  I guess I didn’t do a bad job, because no one yelled at me to get the hell off the mic.  I’d call that a success.

We partied into the night, and took it outside under the stars so we could relax by the fire. 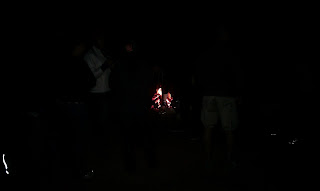 TomTom took off with Lunchbox to get some hot dogs to roast over the fire, because eating tons of catered food wasn’t enough to fill him up.  They returned with sticks and some type of weenies, and cooked them over that roaring fire.  Everyone eventually called it a night, and we said our goodbyes so we could hit the road.

That was my kind of party:  riding bikes, drinking beer, and having fun with friends.  Too bad this is only a once a year thing.