Hold On To Your Youth 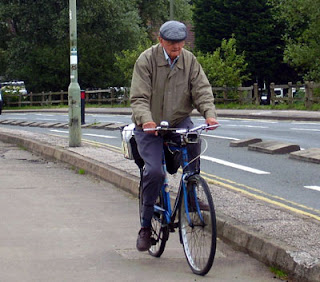 We ain’t getting any younger, you know.

Tomorrow will be the last day of my thirties.  What does that mean?  Well first, it means that I will be forty years old, dumbass.  Second, it doesn’t really mean shit after that.  When I was a teenager, forty sounded really old to me.  Now, it doesn’t seem so bad.  I’m in good health, I’m riding bicycles all the time (and skateboards too), and I don’t look like I have one foot in the grave.  I figured that I would be old-looking and decrepit by now.

Is this some testament to the power of riding bicycles?  Well no, but I guess it does say something about being active.  I see plenty of people my age (and older) that don’t do a damn thing except sit on their asses, watch television, and get fatter by the minute.  Not me.  I ain’t going out like that.

I’m not one to celebrate my own birthday, and the only reason I’m mentioning it here is because it’s such a big number.  I’ve lived on this planet for almost forty years.  Holy shit.  If you do the math, that probably means that I’m about half-dead.  Is that a bad way to look at it?  Maybe, but I don’t plan to sit around and watch the next forty years go by without doing something.  Hopefully I’ll still be riding my bike, and hopefully I won’t be blogging anymore.  I’ll still have stories to tell, but they will be told when I’m sitting on my front porch in a rocking chair, whittling wood, sipping an IPA out of a snobby beer glass, and yelling at those damn kids telling them to get the hell off my lawn.

Ahhh, those will be the good ol’ days.

Even though I’m not planning to have a party, I can’t keep that shit from happening.  My good friends over at DeFeet have something special planned. 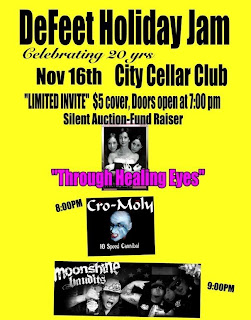 Okay, they’re not throwing me a party.  Instead, this is a celebration of their twenty year anniversary.  As in, twenty years of making the best socks money can buy (made here in by the way.)  In case you didn’t notice it on the flyer, it’s an invite only affair.  That means that if you’re not invited, you get to hear me tell you all about how fun it was.

And don’t worry, I’ll tell you everything.

The major highlight of the evening will be a performance by my new favorite band, Cro-Moly.  It’s gonna be a rockin’ good time.

So with that, I’m out.  Since I’m not having a fancy celebration or anything like that, I’ll be taking a few days off.  No work, no blog, no worries; I’m just going to ride my bike and junk.  Next week is Thanksgiving anyway, so I took an extended vacation.

That is if my senile ass can remember how to get back here.