It’s All A Big Blur


Ten Days ago, I left work and didn’t have to worry about anything for quite a few days.  I had big plans of course, and somehow I thought I would get out on a ride every single day.  Of course, other things got in the way and I didn’t get on the bike as much as I wanted, but a trip I had been planning for about a month was definitely a go.  I decided that it was time to head back to one of my favorite places to ride in …

TomTom had never been there, and Lunchbox couldn’t remember the last time he was there.  Since we all had the day off from work (or school in Lunchbox’s case), we headed west to the mountains.  We got there around high noon, and I mapped out our route.  The plan was to climb all the way to the top, hit some super fast downhill shit, and climb around a little bit to find some more downhill.  That’s my kind of riding:  climb first, and then enjoy the reward of gravity.

We got changed in the parking lot, and headed up the gravel road climb.  No trip to Bent Creek is complete without stopping to pay homage to the bike gods on the way up, so we paused for a moment. 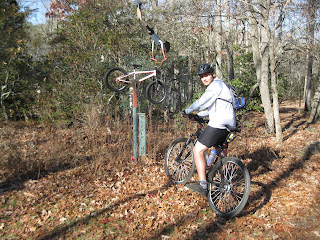 We suffered in the cool temps for what felt like forever.  The road went up, then up some more.  I warned TomTom about this, but I told him the reward was well worth it.  There were no waterfalls like our trip to DuPont, but the view was still pretty awesome. 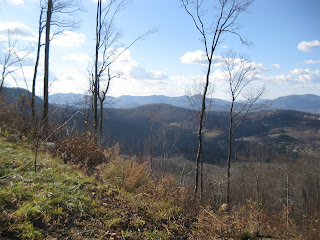 We climbed for a long time, stopping every so often to check out the surrounding mountains.  The rest of the crew was happy to be away from our local trails and in the mountain for a while. 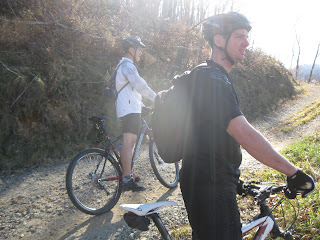 After five (yes five) miles of climbing, we reached the top.  We parked our bikes and looked around for a while, plotting our next move. 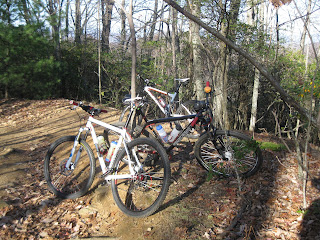 The next step would be a two mile long descent, known around these parts as Greens Lick. 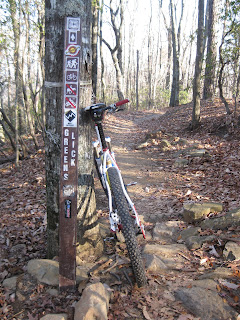 Greens Lick is the crown jewel of Bent Creek, and it was worth every pedal stroke to get to the top of it.  Although he’s been to Bent Creek before, Lunchbox hadn’t had a chance to ride that particular trail.  I informed him (and TomTom) that it was plenty fast, but not super technical.  The worst part about riding it was that you would end up going faster than you wanted to, so I advised them to keep a finger on the brake lever just in case.  We all took off down the trail, and I told them I would stop every so often when it leveled out to make sure we were all together.

It was on one of these stops that I got a chance to ctahc Lunchbox flying downhill. 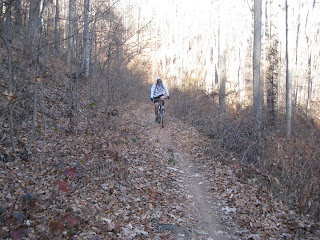 After our first break, we took off again.  We were flying, and as I rounded a corner I didn’t see anyone behind me.  I was so busy enjoying the ride that I had lost my two riding partners.  I pulled over to the side of the trail, and eventually TomTom rolled up.  We waited for a bit for Lunchbox, but he was nowhere to be found.

We turned around to climb back up the hill, hoping not to find him on the side of the trail in a pile.  After a few minutes, some dude came flying down the trail.  We moved over to let him by, but as he passed I asked him if he saw a kid up there with a white jersey on.

Dude (Removing the headphones from his ears):Uh, what?

Me:Did you see a kid up there on the side of the trail with a white jersey on?

Dude: Uh, he’s waiting for you.

He put his earphones back in and flew away, hoping that his little pit stop didn’t mess up his Strava KOM time.  He was kind of a dick, but I guess that’s what Strava does to people.

Anyway, we kept climbing, and eventually we found him on the side of the trail.  He wasn’t hurt, but his bike was. 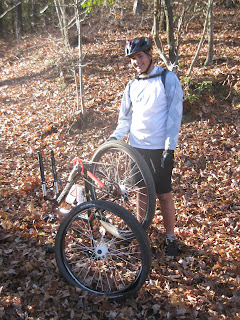 His front tire was flat, and was in the process of changing it.  Lunchbox is the only member of the B-43 crew without the benefit of tubeless tires, and his pinch flat reminded me that I need to change that.  We got him put back together, and went on ouor merry little way.  We didn’t have far to go until the end, so I told everyone I would see them at the bottom.

There’s a pretty cool jump/berm to ride down there, so I got some photos: 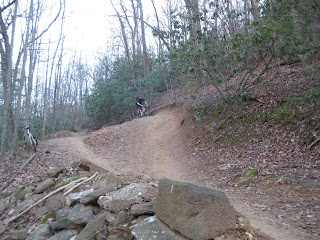 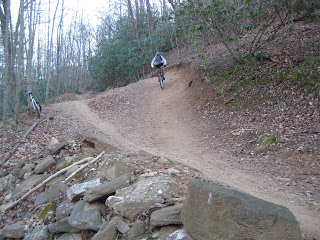 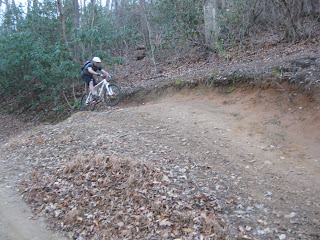 Greens Lick was done, and we all agreed that it was worth the climb.  The next trail wasn’t too far away, and all we had to do was haul ass down a fire road to get to it.  We all took off again, and just like before, I was way out front.  I stopped for a minute and TomTom rolled right up behind me.  Lunchbox was MIA again, so we started back up the road to find him.

And wouldn’t you know, there he was again with a flat tire.  This time it was the rear, and it was another pinch flat.  We changed the tube lickety split and got on our way, riding a lot more singletrack goodness before we hit the parking lot.  It was a great day in the mountains, and aside from two flat tires we didn’t have any major issues.

I love going out of town to ride, and I was happy to take TomTom on his first trip to Bent Creek.  We have a shitload of future adventures planned, so this one was just the tip of the iceberg.
Posted by TheMutt at 8:15 AM